A Ghost of Central Burying Ground 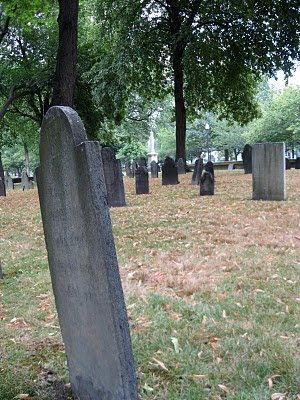 A while ago I made a trip to Boston's Central Burying Ground. It's not as well known as the Copp's Hill, King's Chapel, or Old Granary burial grounds because it doesn't contain any illustrious Puritans or founding fathers. The burials are mostly from the 19th century. The most famous person interred there is Gilbert Stuart, a portraitist best known for his painting of George Washington.

Even though the Central Burying Ground is relatively recent, it seems more decrepit than the other cemeteries. For example, in this photo you can clearly see the rat holes dug into this crypt. I don't really think there's anything left for them to eat in there, however. 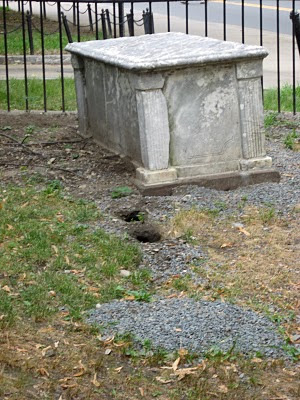 I also saw this mass grave for corpses that were disturbed when the Boylston Street subway station was built. Hmm. Bodies here don't seem to enjoy a very restful slumber. 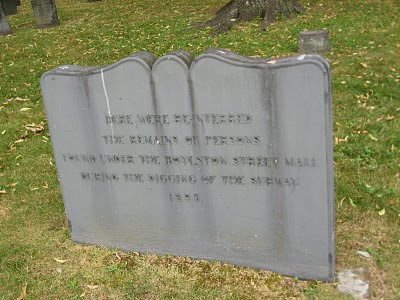 However, the vague sense of creepy neglect was lightened by the fact that there were almost no other visitors. For a living person, Central Burying Ground is a lot more peaceful than the other, more touristy graveyards downtown.

The grave art isn't quite as ominous either. There aren't a lot of skulls and bones carved on the stones. Instead, there are things like this sun, which is almost cheery. 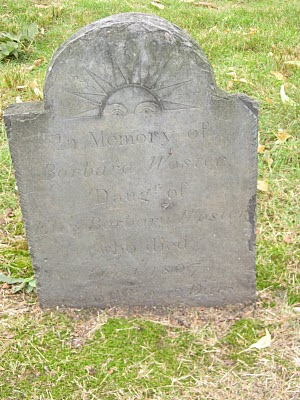 With its dichotomy of creepy and peaceful, Central Burying Ground seems like the perfect place to see a ghost. And indeed, in the 1970s a dentist named Matt Rutger did just that.

Dr. Rutger was walking through the cemetery one afternoon when he saw a young girl in a large, dirty white dress. Something didn't seem quite right about her. Was it the way she stared at him relentlessly? Perhaps. But more likely it was the way she kept appearing wherever he looked, as if she were teleporting around the graveyard.

Realizing this was no ordinary girl, Dr. Rutger ran towards the gate. She appeared in front of him, and then faded away into the air. When he finally reached the sidewalk outside the gate, he felt relief at leaving the cemetery and strange girl behind him.

Dr. Rutger may have been done with her, but she wasn't quite done with him. As he reached to put his car keys in the door, he felt a small, cold hand take them and throw them to the ground. And that was the end of his encounter.

I got the information about the ghost of Central Burying Ground from Cheri Revai's Haunted Massachusetts. I didn't see any ghosts, but it's definitely an interesting place to visit.

I work across the street from this burial ground and like to eat my lunch there on nice days. I agree that it has not been kept up as well as other historic cemeteries in town.

Just discovered this blog while googling Boston's Central Burying Ground. I walk by it almost every morning & often at night as I work various shifts in the construction industry. Future visitors should look for the gravestone of Chow Mandarin. Chow was a mariner who originally came from.... you guessed it, China. His stone states that he was killed from a fall from a ship's mast in Boston Harbor in 1793. A reminder that Boston was a multicultural port well over 200 years ago. On a more personal note a few years back I worked on a construction project alongide CBG that involved sidewalk & wall repair. Several tombs had to be disturbed in order to shore up the walls. It was disturbing & sad to see piles of bones of what must have been hundreds of Boston's early inhabitants. While some workers were spooked working around the remains of the long departed most of us were respectful. But yes there are many disturbed souls in that cemetery.

Hi AssinnippiJack! Thanks for the comment.You're quite right - Boston and the other old coastal towns had people from all over the world in them. I'll keep my eye out for his stone the next time I downtown. That cemetery (and its inhabitants) could use a little love I think!

Thanks for the post Peter! We have so many wonderful old graveyards and cemeteries here in New England and I'm sure they all have a tale or two to tell.