Thomas Morton and the Maypole of Merrymount

I was planning to post part two of the Hannah Duston story, but I got a question from my friend Jeff. He asked, "What do you know about Thomas Morton? I heard something in the news about him."

I know a lot about Thomas Morton, and I actually thought I had blogged about him before. Thanks for inspiring me, Jeff! Happy May Day! 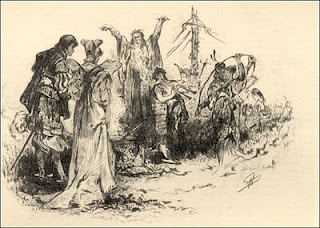 Things were getting crazy down in Quincy in the 1600s! An illustration from Hawthorne's story.

Nathaniel Hawthorne's short story "The May-Pole of Merrymount", written in 1836, tells how May Day festivities are disrupted by some dour Puritans and their soldiers. Hawthorne based his story on the actual life of Thomas Morton, an early English settler. While the Puritans came to the New World to establish a theocracy in what they saw as a wasteland, Morton came seeking freedom amid a landscape of bounty and beauty. Contemporary anarchists, neo-pagans, and those seeking sexual freedom see him as an ancestor. I guess everyone wants to claim a piece of Thomas!

In the late 1620's, Thomas Morton arrived in what is now Quincy, Massachusetts. At the time, it was thinly inhabited by the Massachuset Indians, whose population had been decimated by European diseases. Morton developed friendly relationships with them, and convinced a group of indentured servants bound for Virginia to remain with him. Together, they founded a settlement called Merrymount.

Morton and his men began to trade firearms for furs with the local Algonquians, which angered his Pilgrim neighbors in Plymouth. Even worse in the Pilgrim's eyes, Morton celebrated folk traditions such as Maypole dancing, crowned himself the Lord of Misrule, and encouraged fraternizing between the English settlers and the Massachuset. The Maypole of Merrymount was an enormous cedar tree, crowned with antlers and dedicated as an altar to Bacchus, the Roman god of wine and merriment. Over time, Merrymount attracted other settlers who were unhappy with the Puritans.

Ontological anarchist Hakim Bey writes that Thomas Morton and his followers "had decided to renounce Christianity altogether and revert to paganism. If they had succeeded in uniting with their Indian allies the result might have been an Antinomian/Celtic/Algonquin syncretic religion, a sort of 19th-century North American Santeria." I think this is a definite exaggeration. Morton didn't renounce Christianity - The New English Canaan mentions his Christian beliefs. However, he did compose both poems and songs using imagery from classical mythology to describe the New England landscape, and celebrated Bacchus during the Mayday festivities. Most educated Englishmen of the time were familiar with ancient pagan literature. Think of Shakespeare, for example.

Thomas Morton disregarded established authority, and flirted with paganism. Equally disturbing to the Puritans, the settlers at Merrymount were sexual libertines. For example, Morton wrote about Jupiter and his boyfriend Ganymede, deities that were used in Renaissance literature to denote homosexual relations. The name Merrymount itself was most likely a double entendre. (If you need me to spell it out, send me an email!) According to William Bradford, the leader of the colony at Plymouth, "...even sodomy and buggery (things fearful to name) have broke forth in this land oftener than once.... They set up a maypole, drinking and dancing about it many days together, inviting the Indian women for their consorts, dancing and frisking together like so many fairies, or furies, rather; and worse practices." I'll leave the "worse practices" to your imagination.

Seeing a threat to their moral authority and trade monopoly, the Puritans arrested Thomas Morton and deported him, but he returned to Merrymount within a year. John Endecott, a leading Puritan, chopped down the Maypole while Morton was away and changed the settlement's name from Merrymount to Mount Dagon, after the god whose temple Samson destroyed.

Refusing to sign a document declaring that the Christian God's word would the the law of the land, Morton was again deported, and Merrymount was burned to the ground. While in England, Morton published The New English Canaan (1637), an account of his adventures that extolled the beauty of North America and the nobility of its native inhabitants. He returned to Massachusetts in 1644, was imprisoned in Boston, and died two years later in Maine.

In the end, Thomas Morton's values triumphed. We have our sexual and religious freedoms, and you can dance around the Maypole with anyone you want. There's now a park in Quincy where his settlement once was. And guess what, it's named Merrymount Park, not Mount Dagon.

You can find a lot about Thomas Morton on the Web, but I got my information from Thomas Palmer's Landscape with Reptile and the Boston History Project's Improper Bostonians. Lesbian and Gay History from the Puritans to Playland. Hakim Bey's quote is from his book T.A.Z. The Temporary Autonomous Zone, Ontological Anarchy, Poetic Terrorism.

Wow! I had never heard that before. Thanks for sharing!

I love this. Thanks for posting this image, reference o Hawthorne, and the clear narrative.

Wonderful story which adds much to one's understanding of Hawthorne's tale.

I first read "Maypole" many (and I do stress, MANY) moons ago and was deeply saddened by the intolerance it showed. Yet, it was only a precursor to the evils that were to follow in Salem about 70 years later. Indeed, intolerance is humanity's greatest evil.

Christianity adopted so many "pagan" holidays in its quest to spread itself world wide. Sadly, Beltane (or what some call May Day) was not one of them. Beltane which symbolizes peace & brotherhood is the one day Christianity should have adopted since it professes to worship the Prince of Peace. Christians everywhere should practice Beltane so that we can have a more peaceful world.

REVELS 386 is on! We're celebrating Thomas Morton and Merrymount on Saturday May 18 2013 at Maypole Hill Park in Quincy, Mass., 12noon-3pm---this year, with Urban Thunder Native Drum group, Red Herring Morris Dancers and lots of entertaining solemn foolery! You can explore a lot more about Morton (from texts to videos) at ANCIENT LIGHTS dot o-r-g---including the fact that Morton is America's First Poet in English!

I have just downloaded iStripper, so I can watch the sexiest virtual strippers on my desktop.

Thanks for the great post Peter! I had not heard about Morton, a man definitely ahead of his time.