Now for Some Gothic Entertainment 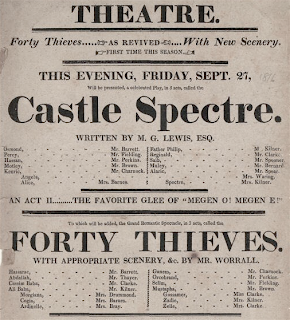 A playbill for The Castle Spectre, from Wikipedia.

"Plays were sucked out of the Devil's teats to nourish us in idolatrie, heathenrie and sinne." (A Puritan clergyman quoted in Bruce Daniels' Puritans at Play: Leisure and Recreation in Colonial New England.)

The Puritan hierarchy that dominated New England, and the Puritan mentality that lingered after it was gone, frowned upon entertainment and spectacle. As readers of this blog know, holidays were one battle zone between the Puritan ethic and more uninhibited human expression. The theater was another.
Theatrical productions were unknown in Boston until the late 1780s, although they had appeared in more liberal Rhode Island before the Revolutionary War. When they finally did appear in Boston, they confirmed the Puritans worst fears.

The most popular plays performed in Boston were Gothic spectacles like Bluebeard, The Castle Spectre, A Tale of Mystery, or The Wood Demon. As the titles indicate, the scripts featured castles, ghosts, monsters, women in danger, and manipulative villains. The audiences wanted to see sex, the supernatural and violence, and the theater companies obliged. Apparently the audiences didn't want to see good acting, as most reviews from the time complain that the productions emphasized lurid Gothic spectacle over decent performances.
The spectacle in the seats rivaled that on the stage. In between drinking, smoking and eating, the audience members would scream at the stage and pelt it with rotten food if they were displeased. Much like today, the pricier seats were at the front of the house, but happily theater goers today don't need to worry about being showered with moldy cabbage. The upper balconies and boxes were much cheaper, and were often used by prostitutes to conduct business.
I'm one of those people who gets annoyed by people who talk during movies, so I'm glad I didn't have to sit through a production of Bluebeard in 1804. (I got this information from M. Susan Anthony's book Gothic Plays and American Society, 1784 - 1830.)

Email ThisBlogThis!Share to TwitterShare to FacebookShare to Pinterest
Labels: A Tale of Mystery, Bluebeard, Puritans, The Castle Spectre, The Wood Demon, theater