He Created Mankind Out of Wood 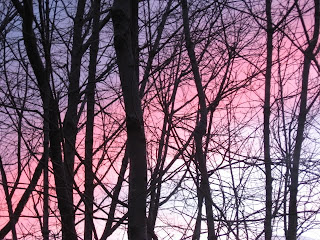 Knocking on heaven's door - the sun setting in the southwest.
Last week, I posted about Hobbomok, the southern Algonquian deity Puritans associated with the Devil. Today, let's talk about Cautantowwit, the one they equated with their Christian god.

According to the various Algonquian tribes of Southern New England, Cautantowwit is the manitou who created mankind, and all the other manitous. He also made mankind. He first tried to populate the world with a man and woman made of stone, but was unhappy with the result. For his second try he crafted a man and woman from wood. He liked these people better, and this couple became the ancestors of mankind. Cautantowwit is also responsible for instituting agriculture, sending his messenger the crow with corn, squash and beans to give to humanity.

Cautantowwit lives in a heavenly realm in the southwest, the direction from which the most pleasant weather reaches New England. (Notice how he's diametrically opposed to Hobbomok, who lives in the northeast). The souls of virtuous people are received into Cautantowwit's realm after death; the evil are refused entry, and wander the world as restless ghosts. In 1624, Edward Winslow recorded this belief among the Wompanoags of Cape Cod:

This his habitation lieth far westward in the heavens, they say; thither the bad men go also, and knock at this door, but he bids them quatchet, that is to say, walk abroad, for there is no place for such; so they wander in restless want and penury.

Cautantowwit and his heavenly realm are also associated with the thunderbird, a sacred, beautiful bird, often represented in art as a winged human. Belief that the thunderbird brings thunder was found among the Narragansett well into the 19th century. (The thunderbird deserves his own post - maybe in August when the weather is more appropriately charged!)

Unlike Hobbomok and many other powerful manitous, Cautantowwit did not appear in dreams and visions. The various Algonquian groups honored him with ritual feasting and dancing; the Narragansett of Rhode Island were particularly exemplary in the honor that they accorded him.

It's easy to see why the Puritans thought Cautantowwit was the same god as Jehovah. They both live in the sky, created mankind, and rule over the virtuous dead. The Algonquians weren't monotheists, though, which screws up the whole Cautantowwit = God (and Hobbomok = the Devil) equation. Roger Williams and other early New England chroniclers wrote that the local Indians knew many gods, including gods for the sun, the moon, and the ocean. The Puritans were just trying to understand a poytheistic system in monotheistic terms. It makes me a little sad that we don't know more about the Algonquian belief system.

My sources for this week's post are William Simmons' Spirit of the New England Tribes, Kathleen Bragdon's Native People of Southern New England, 1500-1650, and Roger Williams' A Key Into the Language of the Americas.