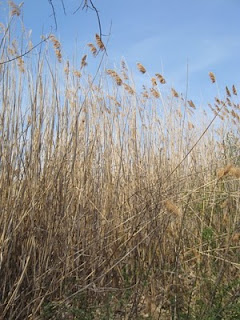 You never know who's waiting in that swamp...
In my recent post about devil-sex, I mentioned that Elizabeth Goodman of New Haven was accused of having sex with Hobbamocke, an Indian deity the Puritans equated with the Christian Devil. I thought I'd write a little more about this interesting entity.

First of all, Hobbamocke is spelled many ways (Hobamock, Hobbomok, Hobbomock, etc.), and is also known by different names, like Abbomocho, Chepian, Chepi, and Cheepi. His multiple names reflect his slippery nature - he's elusive and hard to pin down.

As a deity (or manitou), he's associated with death, the color black, the northeast (the direction from which the worst weather reaches New England), swamps, and dense woodlands. I can see why the Puritans claimed Hobbomok was the Christian Devil in disguise, but the Algonquians took a more balanced view of this deity. For example, although he was sometimes harmful, Hobbomok could also heal disease and convey invulnerability to weapons.

Hobbomok was also the manitou who helped the most powerful shamans, and the Algonquians of southern New England often sought visions of him. To see Hobbomok, young men would spend the night in a desolate place, drinking a mixture of potent herbs including the hallucinogen white hellebore. The herbal concoction caused vomiting, but the initiates would drink their own vomit (often mixed with regurgitated blood) until the mixture remained in their stomachs. (Note: Don't ever try this!) Receiving a vision of Hobbomok during the ordeal conveyed shamanic power. He would also appear in dreams of his own accord, an occurrence which would make the dreamer a shaman from that time forward.

There were two important types of shamans, both having strong relationships with Hobbomok: the pniese, who was immune to weapons, and the powwow, who could heal heal his clients or harm his enemies using his spirit allies. (The word powwow now means an American Indian gathering, but originally meant shaman). In times of trouble, such as war, shamans would often lead their people into the swamps, where they could communicate more easily with Hobbomok or other watery, underworld spirit allies.

Hobbomok appears in dreams in many forms, including a deer, a man, or an eagle, but his favorite forms are the eel and the snake. Terrifyingly, Hobbomok also sometimes appears as a European, as John Josselyn recorded in 1674:

"Another time, two Indians and an Indess, came running into our house crying out they should all dye, Cheepie (Hobbomok) was gone over the field gliding in the air with a long rope hanging from one of his legs: we askt them what he was like, they said all wone Englishman, clothed with hat and coat, shooes and stockings."

Was their any native consultation? If so with who? We are not extinct we are a living people who have a living tradition and should probably be consulted when writing about our traditions. It is mostly good but a few simple things that show that you have not taken the time or consideration to consult with native people.