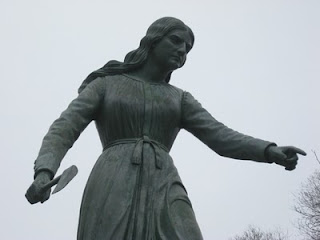 The Hannah Duston statue in GAR Park, Haverhill, Massachusetts.
The steely gaze. The hatchet. The high-necked dress. No, it's not Lizzie Borden - it's Hannah Duston, the heroine of Haverhill, Massachusetts. Her story is just as bloody as Lizzy's, so don't read any further if you're squeamish.
Hannah and her husband Thomas were early settlers in Haverhill, where they lived with their children, but her fame began on March 16, 1697. Hannah was recuperating at home after delivering the newest baby Duston. Thomas was out in the fields with the children, while Mrs. Neff, a neighbor, watched over Hannah. 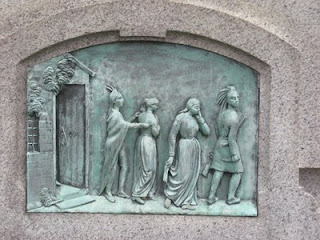 Unfortunately for everyone involved, Hannah's post-partum repose was interrupted by raiding Abenaki Indians. Thomas and the children fled to a defended garrison. Hannah, Mrs. Neff and the baby were captured by the warriors, who canoed up the Merrimac River into New Hampshire after setting fire to Haverhill. During the journey, one of the warriors killed the newborn by smashing it against an apple tree. (Gruesome. And, again, why are apple trees so often associated with death?)
After a few days, Hannah and Mrs. Neff were given to an Abenaki family consisting of two men, three women, and seven children. The family already had one European captive, a boy from Worcester named Samuel Lennardson.
Indians often captured settlers to replace family members who had died, or to use as slaves. Hannah wasn't interested in either option. One night while the Indian family was asleep, she took a hatchet and killed ten of them - one woman and one child escaped. 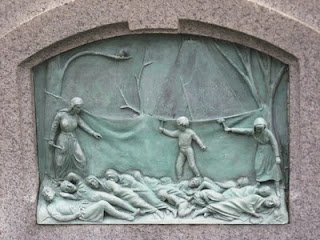 Hannah also scalped the Indians, perhaps helped by Mrs.Neff and Samuel. When they returned to Haverhill, Hannah was proclaimed a heroine. The colonial government paid her 25 pounds as a reward for the scalps. She was praised by Cotton Mather, and written about by Henry David Thoreau. Her family built a new brick home, the Duston Garrison house, which can still be seen on Hilldale Avenue in Haverhill.
Hannah Duston was the first women in the US to have a statue erected in her honor. She has two, in fact: the one in Haverhill (1861), and one in Boscawen, New Hampshire (1874). Joseph Citro notes in Curious New England that the statue in Boscawen exhibits both decolletage and bloody scalps.
I don't know if Hannah would get a statue these days. I was taught Hannah's story as a child, and saw some Duston artifacts in the Haverhill Historical Society. She was definitely the heroine of the story. But people are more aware now that New England's past was complicated, which is a euphemism for "the Europeans came and took the Indian's land and massacred them." I can admire Hannah for being a tough woman who escaped her captors, but I certainly don't see the Indians as villains in this story. Also, as a kid, I wasn't told that Hannah slaughtered six children while they slept. The emphasis was always on her baby and that apple tree.
When I tell this story to people the first time now, they often ask "How could she kill all those Indians while they slept? Didn't someone scream?" It's a good question, and one that never crossed my mind in my youth. Just recently I found a strange supernatural story that explains it, but I'll save it for next week.
You can visit HannahDuston.com for more information about her life and adventures.

As a direct descendent of Hannah Duston (11th generation great granddaughter and related on both my grandfather and grandmother's sides) and having earned my MA in literature and written my thesis on Hannah Duston, I have to respond to your post. The original account of the tale that you tell comes from Cotton Mather's Magnalia Christi Americana. He interviewed Hannah Duston shortly after her return to civilization. On the day of the raid, 26 captives were taken, 13 killed, 13 divided amongst the raiding party. You can also read of other accounts of indian captures that Mather recorded. Two individuals escaped Hannah Duston, an old woman who did take a blow to the head and a two year boy who Hannah had planned to take home with her. I have reasoned that the other children must have been old enough to have posed a threat to the captives' escape or else they may have been spared. As for the apple tree in the yard, its presence has been verified by Henry David Thoreau (I think, to be honest--it has been 15 years since I wrote my thesis) because he visited the original farm location and the tree was still there. In addition, apple trees were common. As a folklorist, you are well aware how stories alter and change as they are handed down. I have not been to the Duston museum, but my aunt visited some years ago. I was born and raised in Colorado and have never been east--something I should do one of these days. There are so many questions as to why she killed and scalped the indians: revenge or was she just suffering from postpartum blues? There was also a bounty on the scalps, so it may have been just that simple, she needed the money to replace what the indians destroyed. Nonetheless, we cannot or should not judge Hannah Duston by today's standards. If you have not read Follow the River, you will enjoy it. Another true story of a young mother kidnapped by Indains. If you would like to continue this discussion, email me at annras806010@yahoo.com. I'd be interested in your comments. I love anything Hannah and relish good discussion on her.

I just reread your post, and you covered all the bases. I just could not resist responding. John Greenleaf Whittier also wrote a poem about her, and you might research Nathaniel Hawthorne to see what he wrote about her. Even more fun is to read what the literary critics made of Hannah Duston and those who wrote about her.

Thanks for your comments! It's great to hear from people who have direct connections to some of these stories. I think the Duston family used to have reunions in Haverhill a long time ago, but I don't know if that's still the case. Thanks also for the suggested reading!

The Dustin Duston society has
Meetings the second Saturday or August every year at the buttonwoods musuem in Haverhill mass. These are usually accompanied by tours to the garrison house and/or to the two statues.

Hi Greg! Thanks for commenting. Is the meeting open to the public or limited to Hannah's descendants?

What are the details of the Abenaki Indian curse on the decendants of the Duston generations?

Your ancestors HUNTED mine for scalp bounty, our fights, our assaults on the colonizers were to defend OUR land! SHE is NO hero! She butchered sleeping children! It is gross that those statues stand and I will fight to get them removed! Shame on any of you who hold up her or that history as heroic!

Anonymous. Please email me at hannahdustonfilm@yahoo.com I need your input. - Harry

Thanks for the interesting post Peter! The comments were enlightening as well.