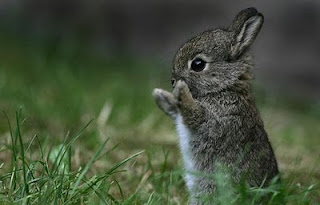 The cutest rabbit photo ever. But keep him away from the sacramental wine!
Wikipedia tells me the Easter Bunny probably originated in Germany, and was introduced to the US by German settlers who came to Pennsylvania. This doesn't really explain why people thought an egg-carrying rabbit should be associated with Christ's resurrection in the first place, but I suppose his true origin lies in a murky undocumented zone of pagan practices and folklore survivals.

I don't think the English who settled around here paid much attention to rabbits or hares, but the local Algonquians sure did. Roger Williams noticed his 17th century Narragansett neighbors treated rabbits very well, and wrote: "They have a reverend esteem of this creature, and conceive there is some deitie in it." The Ojibwa, who lived west beyond New England counted Nanabozho, the Great Rabbit, as one of their chief gods.

The Algonquians who lived in northern New England had mixed feelings about hares. Last year I wrote about the Great White Hare, who presides over the souls of the dead on a frozen mountain. He's like the Easter Bunny's evil twin! But even the typical, non-supernatural white hare was associated with blizzards. The Penobscot said hares sat in their holes and counted snowflakes, excreting a pellet each time a flake fell. That's a lot of poop!

But there are multiple species of rabbits and hares in Maine, and the rabbit (as opposed to the northern hare) was a humorous trickster character in many Penobscot stories. He's a little bit Bugs Bunny, a little bit Charles Manson. One tale that's strangely relevant for Easter begins when Rabbit pointlessly kills the children of the Fisher while he's away. When the Fisher finds out what Rabbit has done, he pursues him through the forest and swamps, intent on revenge.

The chase goes on for days. Finally, exhausted from running, Rabbit finds himself on the steps of a small church with the Fisher closing in. He knows he can't win a fair fight against the Fisher, so he uses trickery. He transforms himself into a Catholic priest. (Note: this story was collected in the 1930s, long after the Penobscot had converted to Catholicism.)

"Come on into the church, my son", he says to the Fisher, "and tell me your problems." The Fisher comes in, and tells the priest how his children were savagely murdered, and how he wants to rip Rabbit into pieces and eat him alive. "Oh, that's terrible", Rabbit the priest says. "Have some of this red wine - it will make you feel better. Have some of this bread, too."

The Fisher drinks the wine and eats the bread, and then eats some more. Rabbit the priest gives him even more, and more, until the Fisher falls asleep drunk. Rabbit takes this chance to turn back into animal form, and runs off. When the Fisher wakes up he realizes he's been tricked, and starts pursuing Rabbit again. And according to the story, they're chasing each other still.

There you go. Rabbits, wine and the eucharist all in one New England folk tale. Happy Easter!

(The story about Rabbit and Fisher is from Frank Speck's 1935 article on Penobscot religious beliefs.)

How did the Fisher know that he had been tricked and that the priest was not real? I won't say that it was because the Rabbit didn't molest the Fisher after getting him drunk...

Thanks for the comments.

As for the bunny blog - wow! Let's hear it for specialization. And I thought this blog had a narrow focus. Have you ever seen the Italian horror film THE SECT by Michele Soave? It's a cross between ALICE IN WONDERLAND and ROSEMARY'S BABY. The heroine's pet white rabbit works for Satan, and there's a weird scene where it uses a remote control to watch TV.

I love your stories, and as a genealogist and historian I find something valuable in all your bits of folkloric trivia. I have nominated you for the "Ancestor Approved Award" and posted your name and
a link to your website on my own blog. I hope it generates some traffic for
you. You can read about it at
http://nutfieldgenealogy.blogspot.com/2010/04/ancestor-approved-award.html You
can pass along the award to another blogger, and if you would like you can display the badge on your website.

Thanks for the great post, Peter! I love learning more Native American legends.

Thanks Rich! I think it's a really great legend.