In late March Tony and I took a trip to Concord, Massachusetts. It's the quaintest town I've ever been in! Tony took plenty of photos.

There's plenty there to see, like Nathaniel Hawthorne's grave in the Sleepy Hollow Cemetery. Hawthorne included lots of folklore in books like The Scarlet Letter and The House of Seven Gables. While in Sleepy Hollow, we also saw three of my favorite animals: a groundhog, crows, and a garter snake. 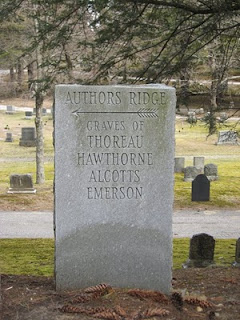 We stopped by Walden Pond, and saw the site of Thoreau's famous cabin in the woods. The pile of stones has been placed there, one rock at a time, in tribute by visitors. 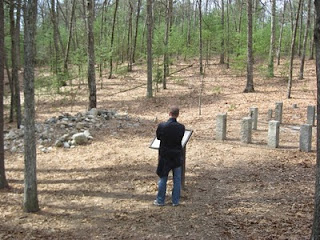 Parts of the Minuteman National Park are also in Concord. It was late March when we were there, and the Concord River had flooded over its banks in a big way. 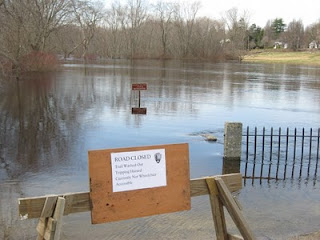 Concord is historic, well-maintained and very pretty. But, as a long-time fan of Stephen King, I know every little New England town has some spooky secret. For Concord, it's the ghost that haunts the Concord Inn. 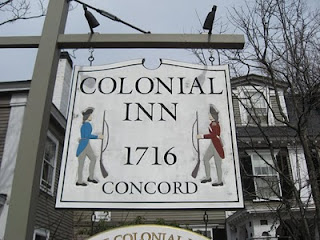 The Concord Inn's original structure was built in 1716 by John Minot, and was expanded by subsequent owners. It opened as a hotel in 1899.

Room 24, which is in the oldest part of the inn, is reportedly haunted. A man in 18th century clothing has been seen repeatedly in that room. He never harms anyone or speaks, but simply walks towards the fireplace and disappears. According to Thomas D'Agostino in Haunted Massachusetts, in 2005 a group of ghost hunters investigating the Inn saw the man, and had a book thrown at them.

A well-known story about the Inn goes something like this. Many years ago, a pair of newlyweds were honeymooning in Room 24. The bridge awoke in the middle of the night, feeling uneasy. At the foot of her bed she saw, glowing faintly, a man in antiquated clothing! He disappeared into the fireplace. The terrified bride shook her husband awake, and explained what she had seen. "We need to leave at once!", she said.

"But darling", her husband replied, "the ghost comes with the price of the room."

The owners of the Concord Inn don't hide the fact they have a ghost. After all, it's probably good for business. They have more information about the ghost on their Web site.

Thanks for the fun read, Peter! I'll have to plan a return trip to Concord, it's been a while.