As this blog's readers know, I love stories about witches. I also love cemeteries. So I really, really love this story from Bowdoin, Maine since it involves a cemetery and a witch.

First, a little clarification. Bowdoin, Maine is a small town in Sagadahoc County, Maine, and is pronounced "bow-din." It shouldn't be confused with well-known Bowdoin College (also pronounced "bow-din"), which is nearby in Brunswick, Maine. Both are named after the Bowdoin family, who played important roles in Maine's 18th century history, but they are not the same place. 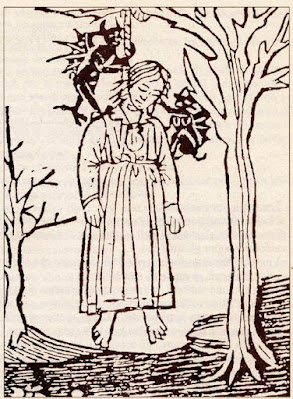 Bowdoin, Maine looks like a charming small town, but small towns often hide terrifying secrets, as every Stephen King fan knows. According to a local legend, Bowdoin's terrifying secret is inside North Cemetery on Litchfield Road. Here, a circle of cedar trees grows around a barren patch of earth at the back of the cemetery. This, people say, marks the grave of a witch.

Or, perhaps more likely the grave of an innocent person labeled a witch. Many years ago, a woman named Elizabeth was accused by her Bowdoin neighbors of witchcraft. An angry mob dragged her into the cemetery and hanged her from a tree. After she was dead, they cut her down and buried her. Since that time, the trees have grown up in a circle around her grave, but nothing grows on the grave itself. The earth remains barren.

This barren circle is said to be cursed. Anyone who steps on the ground there will meet a grim death. According to one story, one night three teenage boys dared each other to step onto Elizabeth's grave. They all took the dare, and all soon regretted it. The three of them died soon afterwards, each succumbing to a gruesome fate.

Some accounts say Elizabeth was hanged in the 1800s, which makes me suspect the story is probably purely legend. The Salem trials were the last time anyone was executed for witchcraft in New England, and they ended in 1692. I suppose Elizabeth could have been murdered by a mob, but other details of the story (like Elizabeth's lack of a last name) make me think it's just a legend.

Of course, saying it is "just" a legend sounds dismissive, which I don't intend. Legends and myths have power, whether or not they're based on fact. If I visited North Cemetery I wouldn't step onto that barren circle, would you? I'm skeptical when I'm sitting here at home, but put me in a lonely cemetery and I get a lot more superstitious. Why take the risk? That's the power a legend has.

Photos on this site show that people have left coins and flowers on the barren circle. Are they literal offerings to Elizabeth's restless spirit, or do people just feel compelled to leave an acknowledgment of the legend?

I first learned about this legend from the Jumping Frenchmen podcast. I've never been to Bowdoin, Maine but would like to visit someday. In the meantime, I did enjoy this video from the Maine Ghost Hunters that documents their visit to Elizabeth's grave. A misty day, a country road, an old cemetery - very evocative!

If you like witch stories, please consider buying my new book, Witches and Warlocks of Massachusetts, which just came out this month. It's available wherever you buy books. Lots of spooky stories and accounts of historical witchcraft! 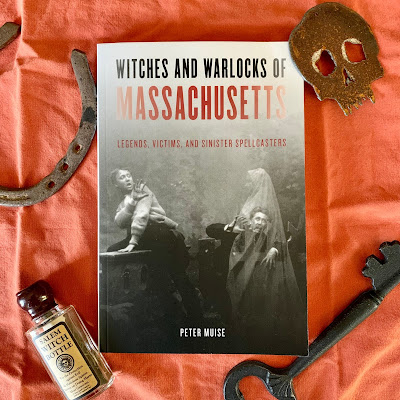 I did indeed buy your book and I'm looking forward to reading it! I don't even remember how I stumbled upon your blog, but having recently(ish) moved to upstate New York, I'm eager to read about all the legends and stories of the region (I know New York isn't actually part of New England, but as someone from the mountain west, I have no idea why that is...I mean it's literally named for a city in England...so it's all the same to me). Thank you for such an entertaining, informative, and spooky blog!

Hi K! Thanks for the nice comment, and for buying my book. I hope you enjoy it!

I think the New England states were colonized by English Puritans, while New York was originally colonized by the Dutch, and then taken over by the English? Or something like that? I'm much better at weird stories than I am with straightforward history!

Thanks for sharing this! I’m delighted with this information, where such important moments are captured. All the best!

Are you a business Man/woman, politician, musician, student, footballer and you want to be rich, powerful and be famous in life. You can achieve your dreams by being a member of the great illuminati and earn $1,000,000 USD, With this all your dreams and heart desire can be fully accomplish, this is a brief summary, if you are interested to become a member of the great illuminati then get back to us for more information and explanations about joining....email the high temple now: brightiluminati666@gmail.com