People in pre-modern New England used a variety of magical techniques to protect their homes from witches. Some of these are attested to in witch trial documents, where we read about people hanging horseshoes over doorways or lining their windows with bay leaves. The Puritans thought the world was full of sinister magical forces and they tried to ward them off with these protective spells.

Historians and archaeologists believe other techniques were used as well. For example, a cat skeleton and a pot were found buried under the entrance of a historic tavern in Charlestown, Massachusetts. The cat was killed with a single blow to the skull. Animal burials inside walls or under foundations are also commonly found in England, and it's believed the animals were buried to somehow deter witches from entering the buildings. Pots (and shoes) are also commonly found buried under or hidden inside walls, and researchers believe they were intended to trap witches.

Unfortunately, no one has found a historic document that explicitly spells this out so it's not clear if that's really the case. Researchers assume these odd burials had a magical purpose but the people who performed them didn't leave any written explanations. Because witches were perceived to be a common threat it seems likely these burials were protective magic. It's likely - but not proven.

The Fall 2019 issue of Historic New England magazine had an interesting article about daisy wheels, another likely form of defensive magic. "Magic Markings" by Michael J. Emmons, Jr. examines a type of distinctive circular marking that is found many older New England buildings. They look like this:


You can see why they're called daisy wheels. Emmons notes that one of these markings is found in a Portsmouth, New Hampshire house built in 1664, and that they are found in many other old buildings in New England and along the East Coast:

I have encountered dozens of sites featuring these symbols. They are found on walls, doors, fireplace lintels, stairs, attic beams, and even floorboards, and they probably exist in hundreds of early American houses. Apparently created (most of the time) with compasses or carpenters' dividers, the symbols typically consist of an inscribed outer circle enclosing six pointed "petals" that stretch from the circle's center to its perimeter, thus resembling a flower. ("Magic Markings," Michael J. Emmons, Jr., Historic New England, Fall 2019, pp. 4 - 8.)

Emmons goes on to write that they are thought to be "..'witch marks' or 'hex signs,' protective inscriptions to guard one's house, and family, against misfortune (and perhaps actual witches)." He also lays out some other theories: that they were used by carpenters when designing buildings, or were simply doodles carved into the walls by children. There's no strong proof for those theories either, and currently we just don't know the purpose of the daisy wheels.

Personally, I think they probably did have a magical purpose, at least at some point in history. As this site points out, daisy wheels are not limited to North America. The ancient Romans seem to have been the first to carve daisy wheels into buildings, and after they conquered Britain the symbol began to appear there as well. It can be found in many Medieval English churches, often carved near baptismal fonts, and carved into furniture as well. The Puritans brought the practice with them when they colonized New England, and in addition to houses the symbol also appears on some 17th century grave stones. I think there must be a purpose to something that was done for nearly 2,000 years. 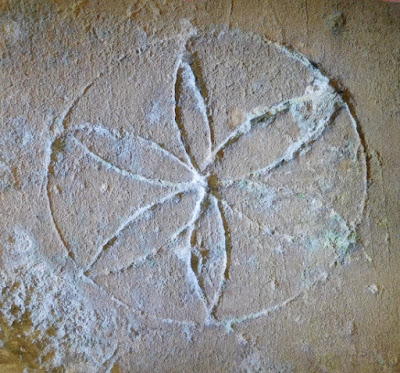 But perhaps over time the exact purpose was slowly forgotten until finally the practice finally died out. Americans stopped carving daisy wheels into houses by the middle of the 19th century. Significantly, that's also when most Americans had stopped believing seriously in witches. Witchcraft changed from something to be feared to something quaint and folkloric. Witches became the subject of stories told to scare children, not entities to protect your house from.

Very nice, and thanks for the pointer to Emmons' article. These "daisy wheels" are very often found in old buildings in England, and there is a fair amount of scholarship on them. See now Matthew Champion's "Medieval Graffiti: The Lost Voices of England's Churches" (2015), for instance.

Very interesting article! I'm wondering how these relate to the "hex mark" like the one at the Salem Cross Inn. That mark on the door handle said to serve the same purpose but looks very different. It reminds me more of runic symbols.

Hi Robert! Thanks for the link to the Champion book. I've skimmed some of the scholarship, but do you know if there are any sources where someone definitively says "Oh, we carve these to keep out witches!"?

Hi Unknown! I think there are a variety of symbols that historians assume were used to magically protect buildings. The daisy wheel is one, but maybe that "X" is another. I went to a wedding at Salem Cross Inn many years ago but didn't know enough to look for the hex mark...

Love this! Patrick Donmoyer at the PA German Cultural Center in Kutztown has done a short guide to PA Dutch barn/hex signs and is also hesitant to ascribe any explicit apotropaic purpose to them. I like that you present both perspectives here!

Interesting what we do to protect ourselves and keep our homes safe. My condo was rehabbed in the late 1970's with sheetrock fastened to wooden studs on top of the original brick. I was working on a space behind the sheetrock when I discovered a large handcrafted (square shank) nail from the original constructions (1870's) partially hammered into an original bean. Over the nail someone had hung a footlong "rope" made of entwined horsehair. This would never have been detected by me or anyone else had I not cut out a section of the wall to look at the plumbing that ran along the base.

Hi Peter! This is "Unknown" (didn't realize it would say Unknown if I chose Google Account). I got married at the Salem Cross Inn a couple years ago! Its history and that mark is one of the reasons I chose it. I know the symbol is on other door handles in New England and wish I had more time to research it since I'm sure there must be something out there about it. Such fascinating superstitions and beliefs! Thanks for your reply!

Hi Peter! I don't remember Campion mentioning any such source that makes explicit the reason for carving daisy wheels into buildings, and (IIRC) I've never seen one mentioned elsewhere. -- My own hunch is that the hidden ones were used as protection from malevolence and harm from any source at all, not specifically against witchcraft. Some modern occultists and magicians still use the daisy wheel for this wider purpose -- The openly visible daisy wheels were surely often used just for decoration and to affirm one's cultural identity; Donmoyer in at least one of his books on his own (Pennsylvania German) culture says as much.

As for the mark on the Salem Cross Inn's old door handle, i suspect it's simply a decorative motif. I've never ever seen that particular mark referenced anywhere in any work on popular (or learned) magic as an apotropaic sign, or any other sort of magic sign. Also, a web search turns up several similar other door handles with much the same motif, but no examples ofwhere it was hidden away from public view.