The other day I visited the Old Burying Ground in Brookline, Massachusetts. Brookline is a very well-maintained, genteel town right next to Boston, but I was pleasantly surprised to find that the Old Burying Ground is a little scruffy. When I was inside its gates I felt like I was transported to the past even though I was really only a few blocks from an MBTA stop. Goodbye home-brewing store and arthouse movie theater, hello crumbling gravestones and ancient oak trees! 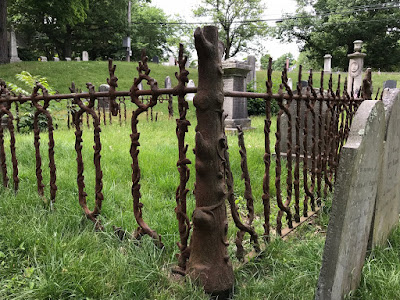 Brookline was originally settled in the early 1600s as a hamlet of Boston called Muddy River (after the body of water that runs through it). By 1705 it became a separate town and took its current name (after two brooks that separated it from Boston). So in other words, Brookline is old, and although it is now a tasteful liberal suburb it does have some strange and unsavory things lurking in its past. The good old days weren't always that good... 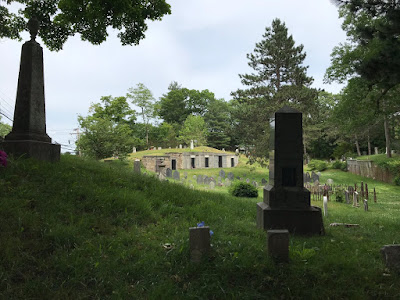 For example, a sign inside the Old Burying Ground notes that eleven slaves are buried somewhere in the cemetery. Slavery was abolished in Massachusetts in 1782. I didn't see any indicators denoting where the slaves were buried. It's possible their graves are mixed in with the other graves, or perhaps were not even marked. That same sign that mentions the slaves also notes that many burials had been disturbed over the years as the cemetery became more and more crowded, so perhaps the actual locations of the slave burials have long since been lost.


I did find the grave of Edward Devotion, whose name has recently been connected with slavery in the local media. Devotion was an important person in the founding of Brookline and donated money and land upon his death for a town school. When the school was finally built (more than a century after his death) it was named the Edward Devotion School. The public school stands near Coolidge Corner and was attended by John F. Kennedy when he was a child.

This sound like an inspiring story of philanthropy, but people recently learned that Edward Devotion was a slave owner. An inventory of Devotion's estate upon his death included "one Negrow." So perhaps he isn't the best person to name a school after? On May 28, the Brookline town meeting voted to remove Devotion's name from the school. The school will be called the Coolidge Corner School until a new name is voted on. 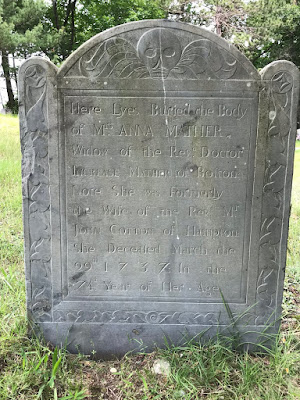 Near Devotion's gravestone I found the grave of Anna Mather, who died in 1734 at the age of 74. The name Mather may sound familiar if you've read anything about the Salem witch trials. Anna Mather was the second wife of Increase Mather, one of Boston's most prominent Boston Puritan ministers (and also a  president of Harvard University). When the Salem witch trials broke out the governor of Massachusetts turned to Increase for his opinion. He urged the magistrates to proceed with caution, but did not denounce the use of "spectral evidence" until much later in the trials. Spectral evidence were the dreams, visions and possible hallucinations that the magistrates used as evidence to convict defendants of witchcraft, even though no one could verify any of them. I think you can see why this might be problematic.

Increase Mather eventually did denounce spectral evidence, writing "It were better that Ten Suspected Witches should escape, than that one Innocent Person should be Condemned." He never denounced the trials themselves though, possibly because many of his friends and peers served as magistrates during them. After the trials ended his reputation was permanently damaged. He married Anna Mather in 1715, many years after the trials concluded. 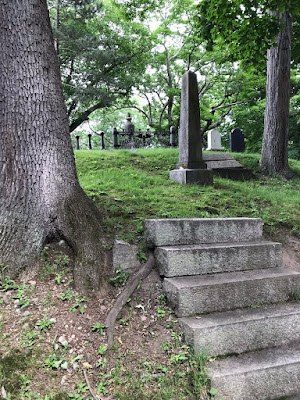 Increase Mather's son Cotton Mather was also a prominent minister who was involved with the Salem witch trials. His 1689 account of several possessed Boston children, Memorable Providences Relating to Witchcrafts and Possessions, is believed to have set a precedent for the Salem trials that began three years later. Cotton was a strong supporter of the trials, and even wrote to Chief Justice William Stoughton to congratulate him on executing eleven people for witchcraft. Cotton is also infamous for urging the magistrates to execute Reverend George Burroughs for witchcraft even after Burroughs successfully said the Lord's Prayer, which it was believed a witch could not recite. Cotton's reputation suffered even more than his father's after the trials ended.

However, he did a few good things, and one of them was to promote inoculation. Smallpox was greatly feared in early Boston and two epidemics swept through the city's crowded and unsanitary streets in 1690 and 1702. In 1721 another epidemic broke out. Inoculation was known in parts of the Old World, and Mather had learned about it from his slave Onesimus. Mather urged Boston physician Zabdiel Boylston to try inoculating Bostonians against smallpox. Boylston agreed, and of the 287 people he inoculated only six died. More than 800 people who were not inoculated died in that epidemic.


Unfortunately inoculation did not become a widespread practice until many years later, and I found graves of two smallpox victims in Brookline's Old Burying Ground. One is for Joshua Woodward, who died from smallpox in 1776 at the age of 46. That is quite young, but not as young as poor Mary Russell, "the virtuous and amiable daughter of Capt. John and Mrs. Miriam Russell" who died from the disease in 1792 at the age of 14 "to the inexpressible grief of her friends." 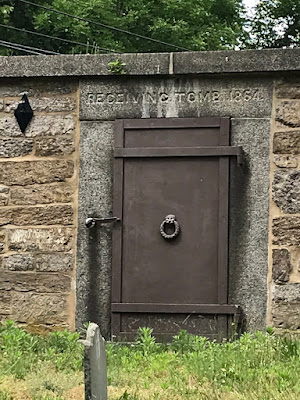 I like reading about the past, and really love visiting old graveyards. But I am quite happy to live in the present. Our country does face some significant problems these days, but happily we don't have slavery, witch trials, or smallpox epidemics. Let's keep those things buried in the past.

What a wonderful piece of history you can find in a cemetery! My sister used to live across the road from one that held the graves of several well known people, including the infamous gangster Squizzy Taylor. Her younger son used to take friends on a tour of the graveyard! Nothing like as old as the one you mention, though.

I've been by that place many times, back when I lived in Roslindale and worked in Chestnut Hill. Next time I go to the Arboretum, I'll have to stop there!

It looks like the cemetery on Walnut Street. Is it not?

I'm thrilled to read your article. Joshua Woodward was my husband's 4 GG and a veteran of the Revolutionary War. Thank you for your blog.