A Spooky Lamp, A UFO, and An Ancient Oak

Unusual stories about New England have been in the news lately. First off, Salem's mayor posted the following picture on Twitter on Wednesday, April 26: 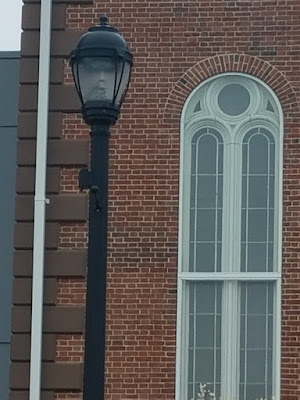 Mayor Kim Driscoll then asked: "Anybody else see a face in this light?...Totally eerie, eh." Well, I do see a face in this light, and apparently many other people did too. Driscoll's Tweet became national news after it was picked up by the Associated Press. Newspapers across the country published the photo, including The New York Times and The Boston Globe. The U.K.'s Daily Mail even published an article about it.

This is a classic case of pareidolia, a tendency to see sentient beings in inanimate objects. The most famous New England example of pareidolia was New Hampshire's late, great Old Man of the Mountain, but Mayor Driscoll's photo is a great example as well. This probably wouldn't have been news if another town's mayor had taken the photo, but as we all know Salem has a reputation for the spooky and supernatural. I hope the mayor's photo encourages some tourists to visit and take in what the city has to offer.

Of course, not all spooky things are as charming as a face in a street lamp. Like, for example, giant triangular UFOs that appear while you're driving around at night. The U.K.'s Sunday Express reported on April 11 that a man in Orrington, Maine told the Mutual UFO Network (MUFON) that he saw just such a craft on Friday, January 13.


According to the unnamed witness, he and several friends saw the craft around 11:19 p.m. as they drove down Brewer Lake Road. They first saw red lights hovering above a dam on the lake, but the lights soon moved towards the witness's car and hovered above it. According to The Sunday Express:

He initially thought it could be a plane from Bangor International Airport.

He added: "But there was something unusual about the lights."

“The way the object moved down closer was very odd and I was euphoric, but terrified at the same time…"

The man went on to describe a bizarre encounter that they tried to film.

He said: "We were all looking at the black equilateral triangle that had glowing bright red lights on each end."

"The object also had a centre light that glowed white and the object was dark against the clear night sky and it had to have been 40 to 60 feet across."


The witness and his friends also saw a second, larger triangular craft nearby. Although the sighting happened in January, it was only recently reported to MUFON, who are investigating. A MUFON spokesperson said the following: "Please remember that most UFO sightings can be explained as something natural or man-made." True, but hard to remember when you're on a dark country road and see a giant triangle above your car!

Finally, an ancient and historic oak tree has passed away. Citizens of my hometown Haverhill, Massachusetts are mourning the loss of the centuries old Worshipping Oak. The oak had stood since the 1600s, and according to tradition was the tree under which the first Puritan settlers held their worship services.


I must have traveled past the tree thousands of times in my life, but never realized how old and important it was. Interesting history is everywhere in New England! Get out there and see it before it vanishes.

I do not know a lot about this stuff but I occasionally like to read a few articles that get my attention. Great job I think I will be reading a few more of your posts.