I recently finished Colson Whitehead's excellent new novel The Underground Railroad. I can understand why it won the Pulitzer. It's an interesting mix of history, fantasy, adventure, and social commentary. It also gruesome and upsetting, which you'd expect from a novel about slavery.

Most of the novel takes place in the South, but one very short chapter deals with a 19th-century Boston medical student who moonlights as a grave robber. The city's medical schools need dead bodies for dissection class, and very few people are willing to leave their corpses to science. It's the perfect opportunity for an ambitious young man with bad morals...

After finishing The Underground Railroad I decided to look into grave robbery in old New England. Whitehead's book is fiction, but he incorporates a lot of fact into it. Does he accurately portray the local grave robbing business? 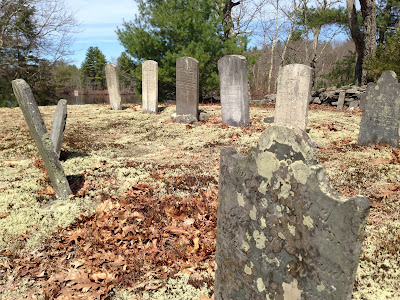 The answer is yes, more or less. In the 18th and 19th century, Boston medical schools were given the corpses of executed criminals by the government to dissect. Unfortunately, the stream of executed criminals was not enough to satisfy the schools' demand for fresh corpses. To increase their supply, medical professors turned to grave robbers euphemistically called "resurrection men." The resurrection were more than happy to dig up freshly buried bodies and sell them to the schools.

Surprisingly, legal penalties for resurrection men were quite light. They often got away with just a slap on the wrist. They had to worry more about being beaten by an angry mob of mourning relatives than being arrested by the police. It seems strange, but grave robbing did not become a felony in Massachusetts until 1815, when the legislature passed a bill called "An Act to Protect the Sepulchers of the Dead."

To avoid angry relatives (and later the police), resurrection men sought out corpses that no one important cared about. The graves of paupers, the insane, and the homeless were all good sources of revenue. African-American cemeteries also made good targets for the resurrection men. Corpses from the lower social levels of society could be taken more easily.

Since the penalties for grave robbing were originally light, sometimes even faculty and students from medical schools tried their hand at it. It saved them from having to pay the resurrection men and seems to have been viewed almost as a fun activity. For example, at Harvard Medical School a secret student society called the Spunkers Club routinely robbed graves in the years before the Revolution. Sam Adams's son was a member, as was William Eustis, who later became U.S. Secretary of War. The Revolutionary War later provided a steady stream of bodies; George Washington himself complained from his headquarters in Cambridge about the theft of a soldier's body. Happily, the Spunkers Club is no longer in operation.

FYI, I will be speaking about the monsters of Cape Cod on Saturday, May 13 as part of the Provincetown Paracon. Other speakers include Adam Barry and Amy Bruni from the TV shows Ghost Hunters and Kindred Spirits, and there will be a special Traveling Museum of the Occult and Paranormal as well. I hope you can make it!