Last weekend I was walking through a park near my house and saw that this plant was growing near some streams: 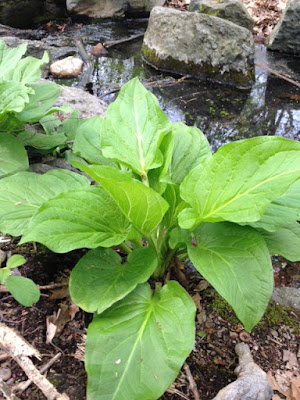 It is of course skunk cabbage. Technically it's eastern skunk cabbage, or symplocarpus foetidus if you like Latin. There's also a western skunk cabbage that grows in the Pacific Northwest. Skunk cabbage gets its name from the pungent odor it releases when its leaves are damaged or when it flowers very early in the spring. I don't know if pungent is strong enough a word - its odor is reminiscent of skunk spray or rotting meat. One of the chemicals that produces its odor is cadaverine, which is also the chemical that makes rotting corpses smell.

When I saw the skunk cabbage I thought, "There must be some interesting folklore about this plant." And there is. Skunk cabbage was used by several local Indian tribes for medicinal purposes.

Before I list those purposes, I just want to say this: DO NOT TRY ANY OF THESE CURES. I am not a  doctor and am not recommending using skunk cabbage to heal anything. I am simply listing this folklore because I find it interesting.

The Micmac claimed that skunk cabbage could be used to stop headaches, while the Mohegan believed that rolling and chewing a raw leaf would prevent convulsions or epileptic fits. The Abenaki used it to reduce swelling, while the Malecite, who live in extreme northern Maine and Canada's Maritime provinces, also used it for unspecified medicinal purposes.

Again, I wouldn't try any of those remedies because parts of the skunk cabbage plant can be poisonous. 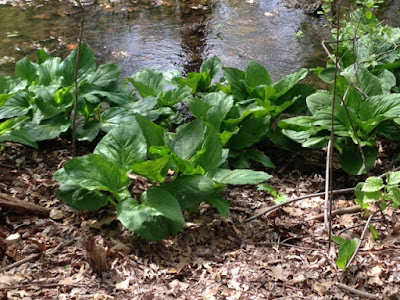 Those uses for skunk cabbage came from local tribes. Several Indian tribes outside of New England also used the plant medicinally and for magic. For example, the Iroquois would apply skunk cabbage leaves to a dog bite. This was done not just to heal the wound, but also to make the biting dog's teeth fall out. I was bitten by a dog once and understand the impulse behind this practice.

The Iroquois also used skunk cabbage to increase fertility by passing it over a woman's genitals, and also to fight really bad body odor. For the latter, they would dry the leaves into a powder and rub it into their armpits like deodorant.

Much like the Iroquois, the Menominee of Wisconsin also use skunk cabbage to treat wounds. However, they used it also for tattoos:

Tattooing was not employed by the Menomini so much for the design as for the treatment of diseases, being a talisman against their return. The medicines were tattooed in over the seat of the pain. Not all of the herbs used were identified, for the writer did not see them growing. Among them were powdered birchbark, charcoal pigment, skunk root, deer's ear root (Menyanthes trifoliata L.), red top root (Lobelia cardinalis L.?), black root (unknown), and yellow root, probably Oxalis acetosella L. The medicines were moistened and tattooed into the flesh with the teeth of the gar pike, dipped in the medicines. The various colors stay and form a guard against the disease. (Huron Smith, "Ethnobotany of the Meonmini Indians," Bulletin of the Public Museum of Milwaukee, December 10, 1923)


I think it's wonderful that the world is full of such interesting folklore. We are surrounded by amazing things if you just know where to look.

Most of the information for this post came from the Native American Ethnobotany Database.

Hi Peter - This article was very interesting. I can remember the entire area across from our childhood home was covered with skunk cabbage. Must say the leaves are very pretty and I love when the plant first begins to bloom and the leaves are tightly curled.

Thanks for the read. Love to Tony, you, and Jub.

Hi Annie! Thanks for the comment and for sharing your memory. Hope all is well!