The Devil In The Shape of A Hog: Three Encounters With Satanic Pigs

What do you picture when you think of the Devil? Maybe you picture a man with fiery red skin, horns, and a tail. Or perhaps you picture someone with bat wings and a goat's head. Maybe you just see a black goat, as in the recent movie The Witch.

The New England Puritans saw the Devil quite a bit, but they didn't necessarily picture him the same way we do now. Many people who encountered him described as a man in black clothing wearing a tall hat, which were signs of wealth. The Puritans were deathly afraid of the local Indian tribes, so to others the Devil appeared as man with tawny skin like an Indian's.

And to others, he appeared as giant hog. 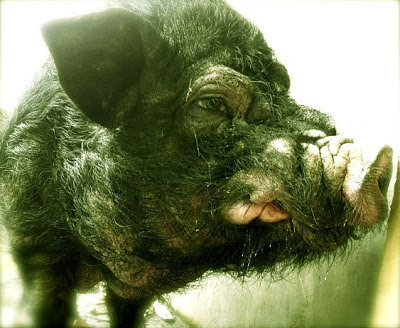 On March 1, 1692, Reverend Samuel Parris's slave Tituba confessed to the Salem magistrates that the Devil had asked her to serve him as a witch.

Judge Hathorne: What? Have you seen a man come to you and say serve me? What service?

Tituba: Hurt the children and last night there was an appearance that said "Kill the children" and if I would not go on hurting the children they would do worse to me.

Judge Hathorne: What is this appearance you see?

Tituba: Sometimes it is like a hog and some times like a great dog. (Note: this appearance she sayeth she did see four times.)

Judge Hathorne: What did it say to you?

Tituba: The black dog said "Serve me," but I said I am afraid. He said if I did not he would do worse to me.


The Devil and his demons appeared to the people of Salem in a bewildering variety of forms: dogs, cats, humans, human-headed birds, and long-nosed hairy little humanoids with wings. Satan's manifestation as a hog was just one among many shapes he took.

But it was shape he took in other times and places as well. For example, the Devil also appeared as monstrous hog in Milford, Connecticut. Four men sat down near a large boulder to play cards, an activity forbidden by the Puritan leadership. Their game was interrupted by the appearance of a huge hog, which frightened the men so much that they abandoned their cards and fled.

Once four young men upon ye rock
Sate down at chuffle board one daye
When ye Deuill appearde in shape of a Hogg
Ande frighten'd ym so they scampered awaye
Ande left Olde Nick to finish ye play.


That little poem appears in Edward Rodolphus Lambert's 1837 book History of The Colony of New Haven, Before and After The Union with Connecticut. Lambert calls it an "ancient stanza" and I am not sure of its origin. The rock under discussion was named Hog Rock after this incident with the Devil. At some point after the Revolutionary War the rock became known as Liberty Rock, which is its official name today.


Milford is blessed to have another boulder also known as Hog Rock, which is located on an offshore island. According to legend, the pirate Captain Kidd may have buried some of his treasure underneath it. Milford's a lucky town to have two such legendary boulders!

According to George Lunt's 1873 book Old New England Traits, the Devil also appeared as a hog in the Massachusetts town of Topsfield, where he menaced travelers trying to cross a bridge over the Ipswich river:

He appeared in the shape of a monstrous hog, taking his station, at night, in the very centre of the bridge; and those who had occasion to cross it, on horseback or on foot, were either fain to turn back, as he encountered them, bristling and snarling, or rushed by, if their occasion demanded it, in a state of extraordinary trepidation.


This went on for quite a while until Topsfield's minster, one Revered Capen, decided to take care of the Devilish problem. One night he went to the bridge and saw the monstrous hog. The Satanic swine grunted and snorted at the minister, but he was undaunted by its bestial display. He calmly faced the beast and said:

You that were once an angel of light, ain't you ashamed to appear in the shape of a dirty swine?


Ouch! Take that, Satan. The reverend's insult was more than the devil-hog could take, and it leapt into the Ipswich River, never to be seen again.


George Lunt says this happened about 100 years before the book was written, during the lifetime of his father. The minister in the story may be Joseph Capen (1658 - 1725), who led Topsfield's church for more than 30 years. Capen's house is now a museum that is open to the public. Please leave your pet pigs in the car if you come to visit.

Although I jest a little bit, I do find these stories fascinating and creepy. The thought of monstrous devil pigs is more unsettling to me than the thought of demonic goats. Goats have a certain dignity and majesty (it's the horns I guess), and although pigs are very intelligent animals there is something about their omnivorous appetite that is unnerving. Plants, animal flesh, garbage - they'll eat it all. I can see why the Puritans thought Satan might take the form of a hog.

In Irish folklore black pigs were generally a bad thing (cp. the transformed school master legend in Co. Cavan). Did the English also have black pig lore, I wonder?

Hi Wade! Thanks for the comment. That's a good question. I should probably research New England lore more. I bet I would find more instances of evil pigs!