Was Shirley Jackson A Witch?

This October I decided to read some classic horror stories. I thought I would celebrate Halloween in a literary way.

Unfortunately I didn't make too much progress. I only managed to read Henry James's "The Turn of the Screw" and Shirley Jackson's short novel The Haunting of Hill House. The James story is fun (if you don't mind really long sentences), but Jackson's novel made a bigger impact on me. It was quite creepy and actually gave me some nightmares. I haven't read anything like that in a long time!

At some point I want to reread it so I can figure out how Jackson did what she did. I think it's partly because the book is about someone with severe psychological problems who also experiences actual supernatural events. That's a potent combo. I think most horror authors throw their weight behind either the psychological aspect or the supernatural aspect of their story. Jackson goes for both.

But there's also something about Jackson's writing style, which is simple but somehow also unsettling. She really knew how to use words to create an uncanny effect. It seems almost magical somehow.

Which leads me to the heart of this week's post: was Shirley Jackson a witch?

A new biography of Jackson came out this fall. Ruth Franklin's book Shirley Jackson: A Rather Haunted Life has been getting good reviews and it's on my reading list. Maybe it will answer that question more fully, but here's what I have been able to gather about Jackson's life (and witchery) so far.

Jackson was born in 1916 in San Francisco to wealthy parents (her grandfather designed Gothic mansions) but was not interested in conforming to their socialite expectations for her. She wanted to be a writer. While in college at Syracuse University she met and fell in love with the future literary critic Stanley Hyman. They married, and Hyman got a teaching job at Vermont's Bennington College, which then was an all-girls' school. Hyman taught classes, wrote criticism, and had multiple affairs with colleagues and students, which he flaunted to Jackson.

Jackson stayed at home, raised their children, and did all the housework. She was the traditional American housewife. But she also wrote short stories, novels, and non-fiction books that were very successful. Many of her works, like "The Lottery," The Haunting of Hill House, and We Have Always Lived in The Castle, are considered classics. She was soon the primary income earner in their home, although it seems that Hyman never really acknowledged it. Jackson died on August 8, 1965 while taking a post-lunch nap. 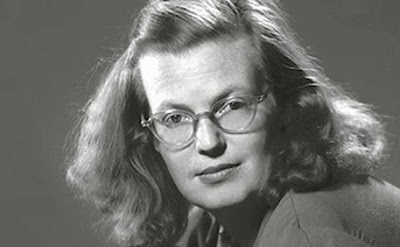 Jackson's fascination with the macabre and the uncanny started at a relatively young age. When she was sixteen she became interested in witchcraft and read everything she could find on the topic. It was an interest that continued through her life. The large house she and Hyman shared in Vermont had an enormous library (larger than Bennington College's) and included hundreds of books on the subject of witchcraft. Her fascination with the dark arts manifested itself in her own writings, which are full of references to magic and the supernatural. She even wrote a children's book about the Salem witch trials, and also a short story simply titled "The Witch."

The public relations people at Farrar and Strauss used Jackson's knowledge about witchcraft to promote her first collection of short stories when it was published in 1949. Claiming that she wrote "with a broomstick instead of a pen," they went so far as to leak a story that she had cursed her husband's publisher Alfred A. Knopf. The story goes something like this. Knopf and Hyman had been arguing about a book of Hyman's criticism, and Jackson supposedly said that she would curse Knopf if he ever came to Vermont. (She said her powers didn't extend to New York City.) Jackson made a wax doll of Knopf and stuck a pin in its leg. That winter Knopf went skiing in Vermont. Wouldn't you know it, he broke his leg...

The press ate it up, but Jackson was embarrassed. At least that's what she told her parents in a letter, claiming that if she really had a broomstick she would fly back to California and hide in their cellar. She couldn't have been that embarrassed, though, since she later used her witchy reputation to promote future books. For example, Jackson sent the following biographical blurb to her publisher:

I live in a dank old place with a ghost that stomps around in the attic room we’ve never gone into (I think it’s walled up) and the first thing I did when we moved in was to make charms in black crayon on all the door sills and window ledges to keep out demons, and was successful in the main. There are mushrooms growing in the cellar, and a number of marble mantels which have an unexplained habit of falling down onto the heads of the neighbors’ children.

At the full of the moon I can be seen out in the backyard digging for mandrakes, of which we have a little patch, along with rhubarb and blackberries. I do not usually care for these herbal or bat wing recipes, because you can never be sure how they will turn out. I rely almost entirely on image and number magic. (Quote found on this site.)


Although the story about Knopf might not be true, and that blurb might be exaggeration, Jackson actually did practice magic. It's apparent even from the blurb that she really did know quite a bit about witchcraft, and not just in an academic sense. Visitors to her house would see amulets and charms lying around on shelves and tables, and those who were lucky were treated to a Tarot card reading by Jackson. Her readings were said to be uncannily accurate.

Because she was saddled with all the domestic chores, Jackson sometimes also used magic to help around the house. For example, if she was unable to find a particular utensil in a cluttered kitchen drawer, she would slam the drawer loudly. Then, she would name the utensil she wanted. When she opened the drawer the utensil she wanted would be on top and easily found. Magic or just physics?

Was Shirley Jackson really, really a witch? It's a question that doesn't have an easy answer. It's hard to say exactly what makes someone a witch. Is it practicing magic? Being in league with hidden forces? Playing malicious tricks on enemies (and unsuspecting readers)? Jackson did all three, but maybe in her case it was just part and parcel of being a gifted writer. But then again, maybe not...

There is a lot of information about Shirley Jackson on the web, but I found this site, this site, and this site very interesting and useful.