My last few posts have been about topics deep in New England's historic past, so today I'm shaking things up and writing about a more modern concern: does Boston have a haunted gay bar?

It's an interesting question. According to experts in ghostly matters, Boston is a well-haunted city. We're an old city in American terms, and we've had a rich history. Lots of wonderful and exciting things happened here, as did many violent and unpleasant things. Massacres, witch hangings, pirate executions, and weird murders are just a few of the grisly things that have happened here. 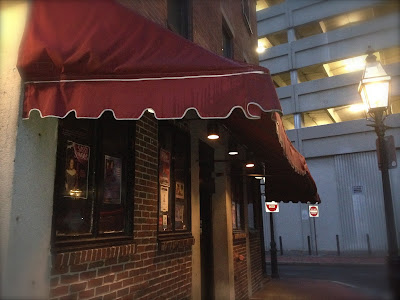 Those are exactly the type of conditions that should lead to lots of ghosts (if you believe in them). From my somewhat limited understanding of the topic, ghosts are usually the lingering souls of people who either died in some horribly traumatic way or are the souls of people who have some unfinished business. I do think there's some discussion in the paranormal and occult communities about whether a ghost is a person's actual soul, or perhaps just some kind of spiritual echo left behind after a traumatic or powerful event. In the latter scenario, an individual's soul moves on after death but they leave a psychic impression behind, which repeats certain actions over and over.

But I digress into theoretical matters. Whatever ghosts are, Boston allegedly has haunted houses, haunted dormitories, haunted theaters, and a haunted hotel. It might also have a haunted gay bar: Jacques Cabaret in Bay Village. 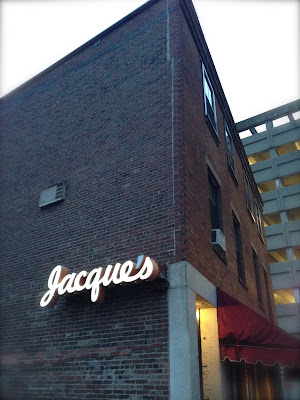 Established in 1938 as your standard straight bar, Jacques became a gay bar in 1940. In the 1960s and early 1970s it was primarily a bar for lesbians, but at some point it became cabaret featuring drag shows. It still hosts drag shows today. Tony and I used to go there quite often in the 1990s. The drinks were cheap and the shows were funny. The performers always said "The more you drink the better we look!" and there was a clear correlation between our alcohol consumption and enjoyment of the drag show. These days the shows at Jacques are quite popular with bachelorette parties.

Although my liver was often haunted with regret the morning after, I never encountered a ghost while visiting Jacques. Perhaps I am not on the right psychic wavelength, because it seems several people have reported ghostly encounters.

One of these is reported in my friend Sam Baltrusis's 2012 book Ghosts of Boston. In an interview with Baltrusis, the comedian Jim Lauletta claimed that he encountered something unusual while performing at the club in 2010. When descending the stairs into the basement one night he felt an unusual energy and thought he saw someone out of the corner of his eye. When he looked again the "someone" was gone.


After Lauletta said the energy felt like it had a "bit of an attitude," Jacques's manager suggested it might be the ghost of Sylvia Sidney, the bar's most famous performer. A drag pioneer known as the "Bitch of Boston," Sidney eschewed the gentle femininity most early drag performers cultivated and instead indulged in crude humor. Sidney died in 1998 at the age of 68, so perhaps her ghost still wants another moment in the spotlight. If you're feeling brave but don't want to summon Sidney's ghost, you can watch one of her performances on YouTube. Be warned: they're full of toilet humor, sex jokes, racial slurs, and nose-picking. Oh, and a really dirty story about Nat King Cole.

I don't believe that Sidney died in a particularly traumatic way, but her ghost may not be the only one haunting Jacques. According to a rumor that has circulated for many years, the bar may also be haunted by victims of the infamous and tragic Cocoanut Grove fire. 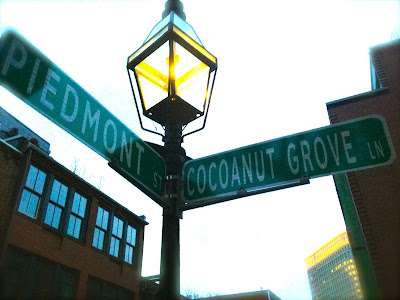 The Cocoanut Grove was a popular Boston nightclub located near Jacques on Piedmont Street. On November 28, 1942 the bar was filled with an estimated 1,000 people when a fire broke out. The flames spread quickly as they ignited flammable decorations, and the main exit became blocked as patrons tried to escaped through the club's revolving doors. Other exits had been locked earlier that night by the management to prevent people from sneaking in, while still other doors only opened inwards and were blocked as people fell against them. By the time the fire ended 492 people were dead, making it the second most deadly nightclub fire in the United States. The club's permitted capacity was only 460.

What's the connection to Jacques? Well, according to longstanding rumors in the gay community, Jacques was used as a temporary morgue for the victim's bodies. It is not proven, but is entirely possible. Photos show the bodies being laid out on Piedmont Street so it's not inconceivable that the police would have used a nearby bar as well. According to the rumor some of the victims still haunt the place where their bodies rested.

An interesting fact: an older friend of mine said he heard the rumor from Sylvia Sidney herself. Did she believe it herself or was it just part of her act? We'll probably never know, unless Sidney tells us the truth from other side.

In addition to Ghosts of Boston, I found information for this post in the History Project's Improper Bostonians: Lesbian and Gay History from the Puritans to Playland (1998).

I work at Club Cafe, which is also in a historic building. It is decidedly haunted.

I work at Jacques and we do shows downstairs. When I'm there alone I swear I hear and see things. It's spooky!!! Machine (which is also owned by the same owner as Jacques) is said to be haunted as well as it used to be some sort of medical storage place? Like they kept body parts and studied things there. Who knows if that's true. But, when it's dark and I'm at work early or late I am always saying "NOT TONIGHT GHOST PEOPLE!!! NOT TONIGHT!" as I run through the dark =)

Hi Sedition and Bobby! Thanks for the comments.

Sedition, if you have any more details about ghosts at Club Cafe please share. Do things happen there when it is closed?