Well, October 31 has come and gone. But don't be sad! Every day is Halloween on this blog, and I'm in the mood for a ghost story.

This story is from 1841, and first appeared in a publication called The Old American Comic And The People's Almanac, which was published in Boston. Richard Dorson includes it in his book Jonathan Draws the Longbow (1946), which is how I learned about it.

The following illustration was printed with the story when it appeared in The Old American Comic. Wow! It's amazing. I think it would make a great tattoo for someone young and hip. 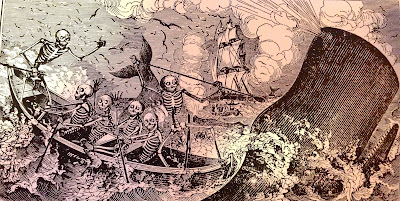 The story is called "The Specter Whalemen," and it goes something like this. Back in the 19th century, Captain Reuben Joy was a prominent whaling ship captain from Nantucket. He was a successful and respected member of the Nantucket community, but he had one regret in his life: he was unmarried. He had been wooing a widowed woman named Mrs. Barnard, but she had refused his advances.

Captain Joy's life changed forever on his 13th whaling voyage. He was captaining the Betsey Ann, and the ship had rounded Cape Horn in search of whales off the coast of South America. The voyage had been a good one, and the hold of the ship was full of valuable whale oil. The ship was preparing to return to Nantucket when a school of sperm whales was seen nearby.

Longboats were lowered, and the crew approached the whales. The ship's second in command, Mr. Ray, successfully harpooned one of the animals. The whale was strong and put up a fight, dragging Mr. Ray's longboat off into the distance. Captain Joy ordered a search for Mr. Ray's boat after the other returned to the Betsey Ann, but Mr. Ray and the other men in his boat could not be found. 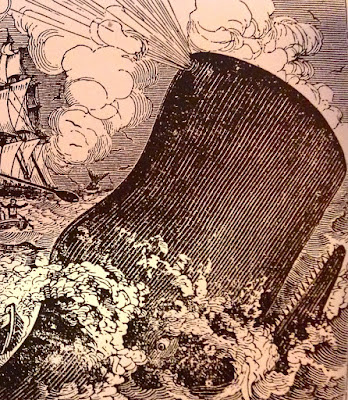 The next day Captain Joy told the crew it was time to go home to Nantucket. The men protested. They wanted to search once again for the missing boat. The captain overruled them, arguing that Mr. Ray and the others had undoubtedly been killed by the whale, and that since the ship was now shorthanded they needed to make haste and return. Despite their misgivings the men agreed.

As the Betsey Ann sailed up the east coast of South America it encountered another whaling ship that had recently departed from Nantucket. This ship carried letters from home, including one for Captain Joy. When Captain Joy opened the letter his face turned pale. Mrs. Barnard had died.

A nearby crew member watched the captain read the letter, and heard him say: "Then I have damned my soul for nothing."

Nantucket was a tightly-knit community, and the crew member knew that Captain Joy had unsuccessfully wooed Mrs. Barnard. He also knew that Mrs. Barnard had spurned the captain's advances in favor of Mr. Ray, who was younger and more handsome. Had Captain Joy called off the search for the missing boat so his rival would die?

The following year Captain Joy once again was in command of a whaling ship off the coast of South America. When the ship approached the same area where Mr. Ray had disappeared a school of whales was again sighted. Boats were lowered.

Captain Joy and the men in his boat successfully harpooned and killed a whale, but the captain's feeling of triumph was shortlived. A decrepit and weathered longboat appeared nearby, and as it drew closer Captain Joy recoiled in horror. It was the Mr. Ray's missing boat, and it was manned by a crew of skeletons. 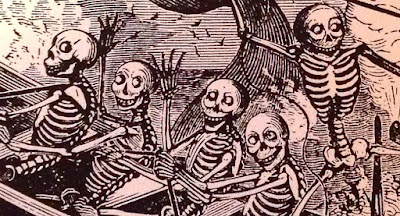 As they approached the captain could hear their bones rattling, and hear the crew's skeletal leader shriek out commands to his undead crew. Oddly, no one but Captain Joy could see or hear the hideous spectral whalemen.

Captain Joy ordered the boats back to the ship and quickly set sail. As they departed the captain looked back. The ghost boat was following them. With a hellish laugh the skeleton's leader threw his harpoon. It didn't reach the ship, but the captain's heart grew cold. 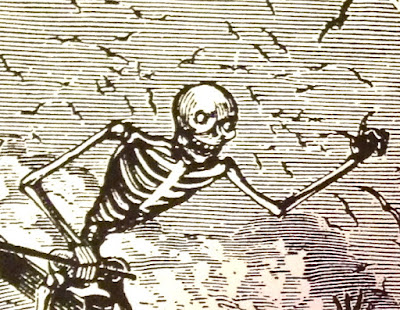 From that time onward Captain Joy encountered the skeletal crew on every voyage he made. Haunted by guilt and terror, he retired from whaling and confined himself to his house on Nantucket, until he finally died alone and unloved.

Is there any truth to the story? There were indeed several whalemen from Nantucket named Reuben Joy, but I couldn't find any indication one was haunted by hideous skeletons. Whether or not the story is true, it serves as a cautionary tale about love and fate.

Great story! One way to make a "legal" comment about maritime captains was probably to make sure such stories of abuse of authority circulated about them. I am reminded of some of Melville's stories with the story in Moby Dick.

Wow that was a creepy one! I can almost picture it as a Ray Harryhausen movie scene. Thanks Peter!

Hi Wade and Rich! Glad you liked the story. It's like "In the Heart of the Sea" meets "Jason and the Argonauts" I guess!

I really liked the illustration - some of those skeletons have really great expressions on what's left of their faces.