Ominous Lore About the Whippoorwill

I've never heard a lonesome whipporwill, or any whippoorwills at all. I've been a city person all my life and whippoorwills don't like the city. These nocturnal bird prefer to live in the woods, where they nest on the ground during the day. They are quite hard to see due to the camouflaging effect of their feathers.

Whippoorwills are active at dawn and dusk, and on nights when the moon is full. They fly around catching insects (yum!) and making their distinctive cry. If you listen closely it might sound like "Whip poor Will," which is how the bird got its English name. 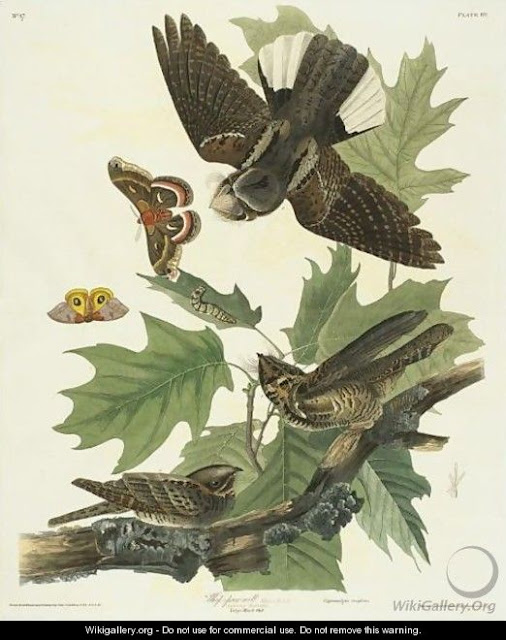 Whippoorwills are mentioned in quite a few songs, but for people who read this blog they might be most familiar from H.P. Lovecraft's story "The Dunwich Horror", which is set in rural central Massachusetts. According to Dunwich folklore, when a person nears death the birds come to steal their soul:

Then, too, the natives are mortally afraid of the numerous whippoorwills which grow vocal on warm nights. It is vowed that the birds are psychopomps lying in wait for the souls of the dying, and that they time their eerie cries in unison with the sufferer's struggling breath. If they can catch the fleeing soul when it leaves the body, they instantly flutter away chittering in daemoniac laughter; but if they fail, they subside gradually into a disappointed silence.

These tales, of course, are obsolete and ridiculous; because they come down from very old times...


Dunwich's resident evil wizard Old Whateley sees the whippoorwills as an omen of his own approaching doom:

Old Whateley noticed the growing number of whippoorwills that would come out of Cold Spring Glen to chirp under his window at night. He seemed to regard the circumstance as one of great significance, and told the loungers at Osborn's that he thought his time had almost come.


When Old Whateley is finally on his deathbed, the local doctor witnesses some folklore in action:

He found Old Whateley in a very grave state, with a cardiac action and stertorous breathing that told of an end not far off... The doctor, though, was chiefly disturbed by the chattering night birds outside; a seemingly limitless legion of whippoorwills that cried their endless message in repetitions timed diabolically to the wheezing gasps of the dying man. It was uncanny and unnatural—too much, thought Dr Houghton, like the whole of the region he had entered so reluctantly in response to the urgent call.


Lovecraft often incorporated authentic folklore into his stories, and it seems that he first learned that whippoorwills are omens of death from his friend Edith Miniter, who lived in Wilbraham, Massachusets. Miniter told Lovecraft that people in her town said the birds appeared when someone was close to death and would try to steal the person's soul as it fled their body. She didn't say exactly what they do it they catch it. Whippoorwills do eat moths and other small things that fly, so maybe a human soul is just another snack to them?

Miniter didn't make up this piece of lore. For example, Clifton Johnson heard it from his informants in western Massachusetts when he was writing his book What They Say in New England (1896), decades before Lovecraft and Miniter ever met.

Gertrude Decrow related similar beliefs in her 1892 article "Folk-Lore from Maine" (The Journal of American Folklore, vol. 5, no. 19). Decrow was told that if a whippoorwill sings under a window or near a door for several nights it is sign someone in the house will die. For example, once a whippoorwill sang repeatedly at the back door of a family's house. The family's son died soon after, and his corpse was carried in through the same back door where the bird sang. According to Decrow seeing a partridge on the doorstep in the morning is also an omen of death, so the whippoorwill is not the only spooky bird around.

Going even further back, the Reverend Samuel Peters wrote in his General History of Connecticut (1781) that the whippoorwill is also called the pope:

It is also called the pope, by reason of its darting with great swiftness, from the clouds almost to the ground and bawling out Pope! which alarms young people and the fanatics very much, especially as they know it to be an ominous bird.


Peters claims people were wrong to fear the bird, since it could also predict storms, which was helpful.

All this whippoorwill folklore might be older than even the first English settlers. According to a video on their website, the Mohegan tribe believed that the makiawisug, the magical little people of the forest, could transform into whippoorwills to travel through the woods. Not particularly ominous, but still you don't want to mess with the makiawisug.

Anthropologist William Simmons notes that the Mohegan word for whippoorwill also meant small boy, and suggests that perhaps both whippoorwills and small boys were associated with the liminal realm between life and death. Why would children be associated with death? The death rate for young children was quite high in traditional Mohegan culture. In one Mohegan burying ground that Simmons excavated 35% of the skeletons were of children under nine years of age. (Cautantowwit's House. An Indian Burial Ground on the Island of Conanicut in Narragansett Bay, 1970)

That's a lot of mystery, gloom and doom for one small bird. To end this post on a lighter note, I will mention that the Penobscot of northern New England attributed a different meaning to the whippoorwill. They heard its cry not as "Whip poor Will" but instead as "li puli", which means to ejaculate semen. I suppose your fear or joy at hearing a whippoorwill depends on what mood you're in.

Always a fun topic; I'd not see that last interpretation before.

I found a few other references to whippoorwills when I talked about them in relation to Lovecraft's "The Dunwich Horror"
https://sentinelhillpress.wordpress.com/2014/10/12/october-ganza-12-dunwichs-whippoorwills/

Interesting essay. I am also reminded of Robert E. Howard's (corresponded with HPL) story, "Pigeons from Hell" wherein the birds were said to have similar properties in southern US folklore (Howard was exposed to both White and African American (from a nanny in his Texas house) folklore as a child. I forget if he ever mentioned whippoorwills.

At my house in the countryside of Massachusetts I always heard these birds on hot summer nights as I lay awake sweating in the New England humidity. They seemed at once both lonely out there in the dark but also satisfied, and I also enjoyed listening to them. (I recall they like semi-open settings, woods abutting fields, of which we had a few). As fields grew in or were built upon, the birds went away. Haven't heard one now since my late teens, I think (~40 years!).

Thanks for your comment! Your blog is great. We all probably wouldn't care so much about whippoorwills if it weren't for Lovecraft!

Thanks for the comment. I have read that the simultaneous urbanization AND reforestation of parts of New England have reduced the whippoorwill population. It's too bad. On the other hand, we have a lot more coyotes, bear and deer than we did when I was a kid. There's not quite as much lore about those big mammals, though, maybe because they were less common during the two centuries when this area was agricultural?

We have their close reletives the Common Nighthawk i have seen these birds flying over the town of Etna,CA where i live during the summer i can reconize them by their call

Early this morning at around 1:40 a.m. I heard the Whippoorwill. I'm 62 and haven't heard that sound since I was 13. Took pics of the moon while standing on the bridge,just the Whippoorwill, the moon, myself. Such peace.

My brother was recently murdered and around 1am, (the morning of his funeral) I heard a whippoorwill singing in the woods while I was alone outside.

There was a whippoorwill that was outside my sister's house one night in September of 1969 she was to go to the hospital the next day to see why she was having headaches, she died the next day.The whippoorwill never came back.

Thank you to all the commenters leaving your experiences with the whippoorwill. I'm also sorry for your families losses.

I was camping with young children as their amateur astronomer in residence. I was out of phone contact. When i went to my tent for a night's sleep, i felt very restless without the company of my husband with whom I normally shared the tent. I pulled my sleeping gear outside to stargaze some more. A whippoorwill started calling & continued into the night as i was in & out of sleep. My husband died of cardiomyopathy during the call of the bird & star gazing. Folk singer - Laurelyn Dossett has written and sings of a whipoorwill. "Remember You Calling" - uncanny lyris to go along with the happening. I'm a possibilitarian by spiritual belief. Kathleen

I was camping with young children as their amateur astronomer in residence. I was out of phone contact. When i went to my tent for a night's sleep, i felt very restless without the company of my husband with whom I normally shared the tent. I pulled my sleeping gear outside to stargaze some more. A whippoorwill started calling & continued into the night as i was in & out of sleep. My husband died of cardiomyopathy during the call of the bird & star gazing. Folk singer - Laurelyn Dossett has written and sings of a whipoorwill. "Remember You Calling" - uncanny lyris to go along with the happening. I'm a possibilitarian by spiritual belief. Kathleen