The Ghostly Twins of Albino Road

Was there a place in your hometown where teenagers went to get scared? I grew up in Haverhill, Massachusetts, and the Countess's Grave in the Rocks Village neighborhood was out local scary spot. It was the grave of an actual European countess, and it was surrounded by an iron cage, so there must have been something spooky going on, right?

I suspect there are dozens and dozens of these places all across New England. Some are well-known, but others are a little more obscure. I just learned about one this summer, and it is very close to where I grew up.

Here's how I learned about it. My high school reunion took place this summer. I wasn't able to attend, but I did manage to connect online with my classmate Jack, whom I haven't heard from in decades. While we were chatting he asked if I had heard of Albino Road. I said I hadn't, and he gave me the paranormal scoop. Here's what I learned from Jack and from a few sites online... 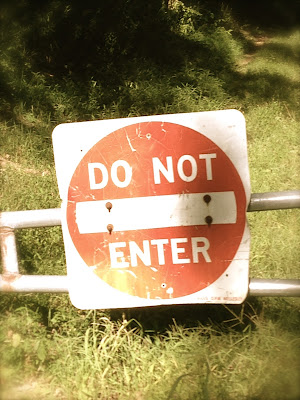 In the town of North Andover there is an abandoned road haunted by the ghosts of albino twin boys. It's located at the intersection of Barker and Bradford Street right near the border with Haverhill.

Many years ago in the late 1600s a married couple built their home on this piece of land. Soon afterwards the woman gave birth to healthy twin boys. However, the couple's joy turned to concern when they saw that their newborns were both albinos. The townspeople of Andover (of which North Andover was then a part) were superstitious and fearful of anyone who was unusual. The couple decided to raise their sons in secrecy and never let them leave the house.

Years went by, and by the time 1692 rolled around the boys had grown into healthy teenagers. Unfortunately one day a neighbor came to their house unannounced and looked into the windows. He saw the pale boys and immediately went to the town elders. 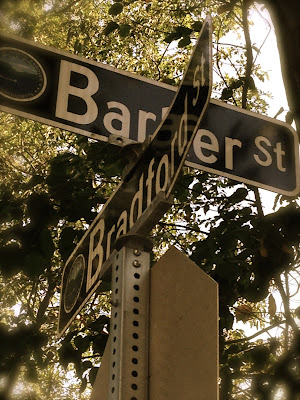 As you might know, the Salem witch trials were terrorizing Massachusetts in 1692, and many people from Andover had been accused of witchcraft. Concerned about possible witchery, the town elders took the boys away from their parents and debated what to do. Were these unusual-looking twins somehow related to the demonic forces trying to destroy the colony?

The elders devised a test to resolve the question. They took the boys to a nearby lake, tied rocks to their feet, and threw them in. The elders believed that if they drowned it would prove they were demonic in nature. The boys sank to the bottom of the lake and died. Having their worst fears concerned, the citizens marched from the lake and burned down the boys' home with their parents inside.

It's said the ghosts of the albino boys (and possibly their parents) now haunt the abandoned road where their house once stood. If you go there late at night you might see the ghostly boys, or perhaps just their eyes, shining red in the darkness. They are not friendly ghosts and don't take kindly to trespassers...

Teenagers in North Andover and other nearby towns visit Albino Road at night and try to see the ghosts. I am kind of a scaredy-cat, so Tony and I visited during the day. We didn't see any ghosts, but I certainly can understand why people might find this stretch of road creepy in the dark. I am always more afraid of deer ticks than ghosts, so if you do wander down Albino Road use a lot of insect repellent. And watch out for poison ivy too! 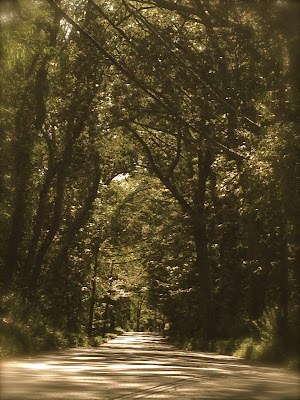 I don't know how long this legend has been told. Jack seems to have heard it when we were in high school back in the 1980s, and it may be even older than that. I also don't know anyone who has sen the ghosts, but there are some interesting things about this legend.

First of all, many people in Andover actually were accused of witchcraft during the Salem trials. In fact, more people from Andover were accused than people from Salem! So there's a little bit of historical truth behind the legend.

The idea that the town elders drowned the albino twins seems to be a garbled version of the water tests that witches in England were subject to. Also known as ducking, this process involved throwing an accused witch into a pond or lake. People believed that water would reject that which was unnatural or evil. If the accused witch floated, it was taken as a sign that the water rejected them and they were guilty. If you sank you were innocent. Of course, you also ran the risk of drowning if you sank, but at least you weren't a witch. The Albino Road legend seems to get this process backwards, and I'm not sure if the water test was ever used during the Salem trials. 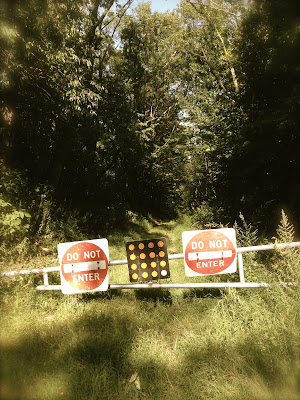 I also find it interesting that the boys aren't really supernatural monsters when alive, but then they actually become supernatural monsters after death. There is a lesson about tolerance behind this legend but maybe that lesson gets a little garbled. After all, it turns out those poor albino boys really are something to be afraid of, but just in ghostly form.

Lastly, this is a good legend for teenagers, because it is about teens whose parents never let them leave the house and who are misunderstood by everyone around them. It's never easy being a teenager, particularly not when there's a witch hunt going on.

PS - I will be speaking at the Rowley (Massachusetts) Public Library on Saturday, October 3 at 1:00 pm. My topic: North Shore Witchcraft: Legends, Stories and Practical Tips. I hope you can attend!

Hello! I just wanted to drop a quick note to tell you how much I'm enjoying your blog. I actually stumbled across New England Folklore while researching a story for my own blog. I must admit that I got distracted here, and my own blog post didn't get written until about four hours later! Thanks so much for this amazing resource!

Thanks Collen! I am glad to provide you with hours of non-productive time!

Loved your blog post Peter! Jack just sent me the link -- thanks Jack!

Hi Peter... wonderful to read you. super blog, scary and brings back memories. :) (not of being an albino teenager). thanks Jack for sharing the link with me. ciao!! beth

Thanks for the comments and thanks for reading! It's been a long long time since Haverhill High!

I grew up in North andover, I graduated in 2010 and kids were always talking about albino road! My friends mother who also grew up in this town told us the story about albino road when we were young. The story has been told around the town for decades! If you make it to the end of the road, you will actually end up in a golf course now! Hah

I used to bump along that road as a "short cut" from 125 to Boxford to get to my grandmother's in Haverhill. My little Subaru didn't mind the bumps but the road was closed off probably 20 years ago. Far Corner Golf Course probably didn't like people using the road and ending up on their property!

Actually the story is that there was only one albino child and he murdered his parents, and if you drive very slowly down the road at night with your headlights off you'll see a white figure run across the road.

Thanks for the recent comments. That is very interesting about the history of the road. I haven't heard the single ghost version of the story until now. Thanks for sharing it!

Hi, my husband is from Charleston mass and was actually just telling me stories from his trip down albino road, so I decided to google it, he has some creepy happenings that scared him and his group of friends. Thanks for the blog I truly enjoyed it!

Glad you liked the post! Feel free to share the spooky experiences in the comments if you want to. I'm always excited to read about people's experiences.

I have never heard of this story before and i grew up in North Andover,graduated from No. andover high,interesting.