Wishes from the Water Dwarf: A Creature from Penobscot Legend

It seems like Bigfoot is the monster most frequently sighted out in the woods these days. He's been seen in every New England state, even Rhode Island. However, in the past a much greater variety of strange creatures could be seen lurking around New England, and many of them are documented in the region's Native American lore.

One of the more interesting creatures was the water dwarf of Penobscot legend. I write in the past tense, implying that the water dwarfs are gone, but that may not be the case. Maybe they are just lying low and keeping out of sight. That might be OK, because seeing a water dwarf often brought trouble.

The Penobscot name for the dwarfs was alambegwinosis, which literally translates to "underwater dwarf man." (That would be an awesome name for a superhero!) Sometimes singly and sometimes in villages, these creatures dwell in deep pools in rivers, or at the bottom of lakes. An alambegwinosis is quite distinctive looking. If you encounter a three-foot tall naked man with long straight hair down to his waist near an isolated deep body of fresh water you've probably stumbled on a water dwarf. 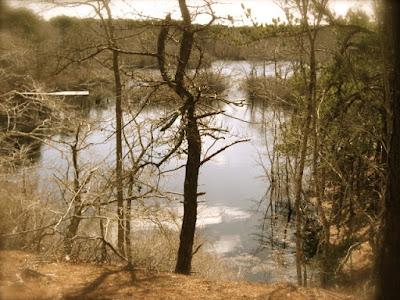 If you do see one you should probably get away as fast as you can. The water dwarfs don't look menacing, but they generally bring bad luck. The anthropologist Frank Speck tells the story of a Penobscot man who was hunting by the shore of frozen lake. When darkness fell the hunter made camp and fell asleep, but was awakened by the sound of someone walking nearby. He stuck his head out of his tent and by the firelight saw an alambegwinosis run away from the camp and jump into a hole in the frozen lake. Several days later the hunter was crossing another frozen lake on his way home when he fell into a hole in the ice and died. The water dwarf had foretold his death.

TRIGGER WARNING (as the kids say these days): Folklore can sometimes be bawdy and crude. If dirty jokes or sexual situations offend you stop reading now and come back next week!

If you help a water dwarf he will grant you three wishes, but they might not work out the way you hope. Speck tells another story of a father, mother and son who were camping by a lake. Shortly after they set up camp a huge storm struck. Thunder shook the sky, and heavy winds churned the lake's waters into foamy waves. When the storm passed the family emerged from their tent and found a small naked man with long hair lying unconscious on the shore. It was an alambegwinosis who had been injured in the storm.

The family took him back to their camp and nursed him back to health. He recovered fully and as he walked back into the lake he granted the family three wishes in gratitude.

A few days later the family broke camp and made their way to a local trading post. They had trapped many animals and hoped to trade their furs for household goods.

When they arrived at the trading post a well-made manufactured broom caught the mother's eye. "Wow!" she said without thinking, "I wish I had that broom." Instantly the broom appeared in her hand. One wish had been used.

Her husband was enraged. "Arrrgh! You wasted one wish on that stupid broom! I wish it was stuck up your arse!" Uttered in anger, his wish unfortunately came true. Two wishes had been used.

Their young son kept a cool head, and wished that the broom was back where it belonged. Instantly it was once again hanging on the wall. The water dwarf's wishes had all been used.

A few random thoughts on these stories, which are from Frank Speck's 1935 article "Penobscot Tales and Religious Beliefs" in Volume 48 of The Journal of American Folklore.

1. The three wishes gone bad is an old folk motif found in places as diverse as India, Estonia, France and England. A very raunchy version appears in the unexpurgated version of 1001 Arabian Nights. The classic horror story "The Monkey's Paw" is a literary example of the same motif, but the folk versions are usually humorous and serve as warnings against greed and stupidity. Was the motif brought to Maine by English settlers or did it arise independently? There's a good question for someone looking for a thesis topic.

2. It's interesting that the Penobscot family wastes their wishes in a trading post over goods manufactured by whites. Maybe it's a precautionary tale?

3. Finally, circling back to how I started this story: does anyone see water dwarfs these days? I haven't read about any alambegwinosis sightings recently. When it comes to the paranormal I believe you often find only what you're looking for. If you go out looking for Bigfoot, you'll only see Bigfoot. Then again, Bigfoot seems safer than the water dwarfs. He might be scary-looking but at least he doesn't grant wishes...