This is my second post about the mysterious Moodus noises. You can read part one here.

Once the English settled in Connecticut they developed their own theories to explain the mysterious subterranean noises. They of course didn't believe in the Algonquin god Hobomok, although some thought he might really be a demon of some kind or perhaps just the Devil under another name.

But they did believe strongly in the Devil, who was often blamed for strange occurrences and misfortunes. And if the Evil One himself wasn't the responsible party, then perhaps it was witches, who were his earthly minions. And someone sinister just had to be behind the terrifying booming Moodus noises.

It was a strange mix of things in East Haddam: Indian legends, weird sounds coming from a mountain, religious beliefs about Satan and witchcraft. Strange but I suppose quintessentially New England, and from that mix emerged the following story, quoted here from Charles Skinner's Myths and Legends of Our Own Land (1896):

It was finally understood that Haddam witches, who practised black magic, met the Moodus witches, who used white magic, in a cave beneath Mount Tom, and fought them in the light of a giant carbuncle that was fastened to the roof...

If the witch-fights were continued too long the king of Machimoddi, who sat on a throne of solid sapphire in the cave whence the noises came, raised his wand: then the light of the carbuncle went out, peals of thunder rolled through the rocky chambers, and the witches rushed into the sky.


I love the idea of good witches battling it out with bad ones. It's a theme is found often in continental European folklore. The historian Carlo Ginzburg documents many variants of it in his book Ecstasies: Deciphering the Witches Sabbath. Some cultures believe troops of good witches fight bad ones, while others think the fight is between packs of good werewolves (!) battling evil witches, or gangs of good shamans against evil spirits. Usually the benevolent supernatural beings live in the village of the person telling the story, while the bad ones live in the village next door. Funny how that always works out. It's kind of the supernatural version of Red Sox vs. Yankees, I suppose, except in these stories the fight is usually over the fertility of the land rather than the World Series. 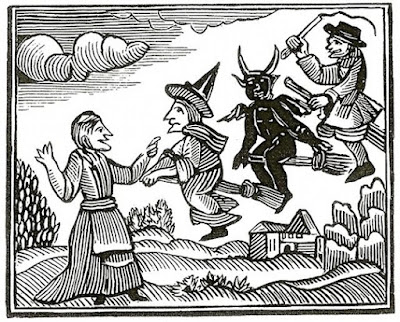 In European lore these battles are often presided over by one dominant supernatural being, such as a goddess or mysterious military leader. That role is filled in Moodus by the "king of Machimoddi," who is the spirit of Machimoodus, the original Algonquin name for the area. But who is he? Is he Hobomok, the Devil, or someone else entirely? This king seems strangely ambivalent for the Devil, who I can't imagine would just sit idly by during a battle of good and evil.

I don't know where or when this story first originated. Perhaps it was brought to Connecticut by someone familiar with European lore, or perhaps it was developed independently by the people of Moodus.

It is significant that the cave was supposedly lit by a giant carbuncle. We don't hear that word often now, but it's an old terming meaning any red gemstone. This giant gem features prominently in the next legend about the Moodus noises.

In the 1760s an elderly man named Doctor Steel arrived in East Haddam, claiming he had been sent to Connecticut by King George to stop those pesky Moodus noises. He also claimed the cause of the noises was the giant carbuncle which, depending on the legend, either illuminated the cavern where the witches fought or blocked the entrance to the cave. Like a dentist removing a bad tooth, Doctor Steel was going to remove the bothersome gem.

After building a small house on Mount Tom the good doctor locked himself inside. Curious passersby noticed strange smells and sounds emanating from within. Several weeks after his arrival, Doctor Steel was seen to emerge from his house and make his way to the entrance of a cave that led deep into the mountain. Several hours later, people in the village saw a bright red light illuminate the mountain top. It was the glow of the carbuncle! Dr. Steel had successfully removed the giant gem.

In the morning the villagers went to congratulate the doctor, but found that he had already departed for England by ship, taking the giant gem with him. Unfortunately, he never arrived back in England. The carbuncle was filled with uncanny supernatural power, and a storm destroyed the ship and drowned all its passengers. The gem sank to the bottom of the Atlantic.

The gem carried with it an evil fate, for the galley sank in mid-ocean; but, though buried beneath a thousand fathoms of water, the red ray of the carbuncle sometimes shoots up from the sea, and the glow of it strikes fear into the hears of passing sailors.


The Moodus noises stopped for a few years after Dr. Steel's operation, but eventually they began again. The local Indians nodded wisely. A new red gem was growing in the cave...

Geologists now claim the Moodus noises are caused by micro-earthquakes that occur underneath Mount Tom. I suppose that's a scientifically accurate explanation, but it's not as appealing as the earlier legends. I like idea of a cave deep beneath the earth, illuminated with a red glow, and presided over by a mysterious king. If you ever find that cave let me know.

I remember watching a Halloween trilogy of spooky New England folk tales on a local PBS affiliate in the late 70s. I believe they were shot on video, and one was called "The Machimoodus", very similar to your retelling of the legend. I think another one had to do with the Devil's Hopyard. I've searched youtube and google for any reference to this program and have had zero luck.

If you ever find it let me know. It sounds great! A lot of these old legends would make great movies.

This "Doctor Steel" didn't have a blue box with him, by any chance?

I mean, look at the story: Something weird and seemingly supernatural is going on and then a mysterious Englishman calling himself "Doctor" suddenly shows up out of nowhere to investigate it, solves it (presumably after some sort of adventure), and then departs just as suddenly while no one's looking. That's basically every second episode of Doctor Who ever written.

Too funny! And maybe true? I don't know if those old Puritans would have recognized a police call box...