Ghosts of the Great Elm and The Witching Elm

Many years ago, a great elm tree used to dominate the landscape of Boston Common. It was so large is was just referred to as the Great Elm.

According to Wikipedia, at its height the tree was nearly sixty-five feet high and the canopy of its branches spread out over eighty feet. It was so big that it had a hollow a child could climb into. That's a really big tree!

The tree eventually fell in a winter storm in 1876, but it was estimated to be over 250 years old at its demise. Even in the 1830s the tree was surrounded by a fence to protect it, and a plaque nearby proclaimed that the tree had been in existence since before the English settlers arrived. I don't know if that can be proven, but I like the idea of one last piece of the older, wilder world surviving into the Industrial era.


A lot of stories and legends gathered around this "vegetable patriarch," as it is called it the 1838 book The Boston Common, or Rural Walks in Cities. For example, Samuel Barber claims that Benjamin Franklin used to play under the tree while tending his family's cattle on the Common. Quaint and patriotic!

Not all the legends are quite so charming. The Common wasn't just used for cattle-grazing; it was also used for executions. Executions were a public affair in the Colonial era, and large crowds would turn out to watch. This was the era before television, and executions were often festive (if gruesome) sources of entertainment. For the common people they were a chance to take a break from work, while the government regarded public executions as a good deterrent to future law-breakers.

Murderers and other criminals were executed on the Common, but the definition of "criminal" three hundred years ago was much broader than it is today. Dozens of rebellious Indians were publicly executed, as were four witches and several religious dissenters like Quakers. On some occasions gallows were constructed to do the dirty deed, but in other cases large sturdy trees were used. We do know that Mary Dyer, the famous religious dissident, was hanged from a tree on the Common in 1660 after her final return to Boston from exile.

We don't know exactly which of the many trees on the Common were used for hangings, but tradition assigns the grim role to the Great Elm. It certainly was big enough.

A plaque on Boston Common commemorates the spot where the Great Elm once stood, but ghosts of those unlucky people hanged on its branches may still linger. According to my friend Sam Baltrusis's book Ghosts of Boston: Haunts of the Hub (2012), tenants in a nearby commercial building reported hearing clanking chains in their empty basement. Perhaps they were psychic echoes of the shackles used to restrain doomed criminals as they were led to their deaths? More significantly, the ghost of a woman in Puritan attire has been sighted near the Great Elm site. The ghost weeps and wails before disappearing. Baltrusis speculates that it might be the ghost of the Irish witch Goody Glover, who was hanged on the Common, but there unfortunately are many other possible candidates. 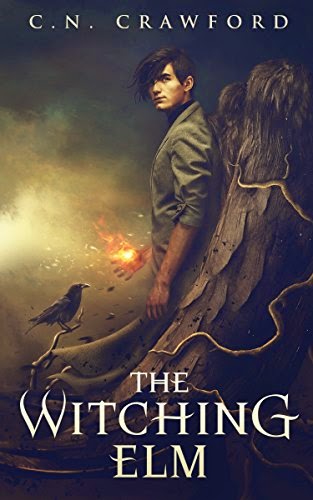 Now to shift gears, from ghost stories to young adult fiction. The Great Elm, or something very much like it, reappears in C.N. Crawford's new young adult novel The Witching Elm. The book's young hero, Tobias Corvin, lives in an alternate universe's version of Boston. The city is called Maremount, and it was founded by Algonquian and English magicians.

In our world's history Maremount, or Merrymount, was a free-loving, multicultural settlement destroyed by the Pilgrims in the early 1600s. In The Witching Elm Maremount is a place where magic is real, but that doesn't mean it doesn't have its problems. Only the upper classes are allowed to practice magic, and as the novel begins Maremount's forces of oppression, led by the mysterious Rawhead, are cleansing the city of illegal magicians and witches. Tobias's family is under suspicion, and for safety Tobias is transformed into a raven and sent to an even stranger city in another dimension: modern-day Boston, Massachusetts.

After regaining his human form Tobias takes shelter at Mather Academy, a prestigious old boarding school located near Boston Common. But things at the school are not quite what they seem. Why are students turning into withered corpses? What's the connection between the Academy, the Salem witches, and Nathaniel Hawthorne? What's up with the weird jewelry some students wear?

After Rawhead's minions appear in Boston to find Tobias, a new tree mysteriously grows at the site of the Great Elm. And then the executions begin...

I really enjoyed reading The Witching Elm, which was sent to me by the authors. (C.N. Crawford is really two people, Christine and Nick Crawford.)  I appreciated the way elements of New England folklore were woven into the book to make a compelling mystery. It's sort of like Harry Potter meets The House of Seven Gables meets this blog. If you like any of those things, or are just a fan of well-written YA fantasy, I'd recommend you purchase a copy. Don't read it too late at night, though, because things do get a little gruesome for the students and faculty at Mather Academy...

Thank you for the review! Love the summary of the Great Elm.

Also, if it seems like a cross with this blog, that's because we heavily referenced this blog when writing it. :)

According to Douglas Edward Leach -"The Flintlock and the Tomahawk" there were actually hundreds of Native Americans executed there after King Philips War....Bill P.

Hi Christine! It was my pleasure. Good luck with the book!

Thanks for the comment. That number seems entirely possible. I came upon an account of 30 Native Americans being hanged in just one day, and another account of a chieftain being tied to a tree and shot. Very grim stuff.

That's interesting (number of executions). One thing I noticed when researching was that the executions of Native Americans started off very detailed (e.g. Matoonas executed by firing squad on such and such a date), and then over time they started to get vague because they were so commonplace. It would say things like, "9 Indians shot on Windmill Hill" - no explanation given, and no names. They might have stopped keeping detailed records after a while.