The Ghost of Midnight Mary

I was recently in New Haven, Connecticut for a work conference. I was excited not only to attend the conference, but also for the chance to visit the infamous grave of Midnight Mary. It's located in the Evergreen Cemetery, a large Victorian-era burying ground. Even if Mary's grave weren't in it this would be a cemetery worth visiting. 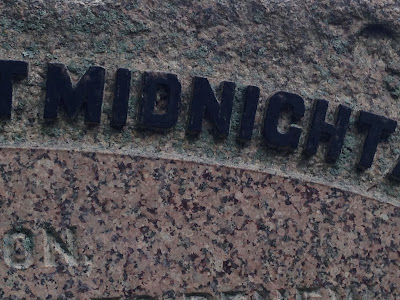 The grounds are filled with mournful angels and many statues of weeping women. Most are in good shape, but a few of them are worn down from the weather. The second one is kind of creepy looking. 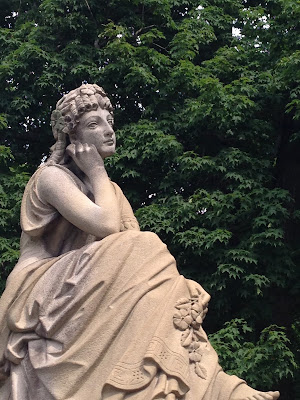 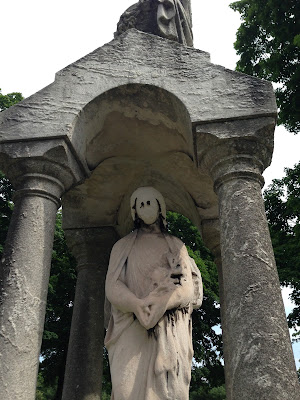 Evergreen also features a lot of obelisks, which are pretty dramatic-looking, particularly when they are all grouped together like this. 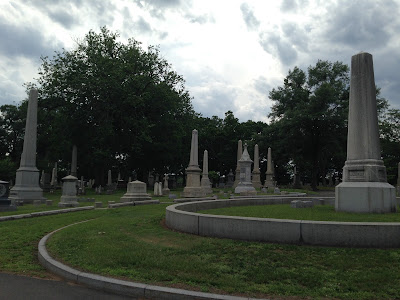 I think Evergreen is still an active cemetery, and there are some interesting modern monuments as well. I like this giant cube! 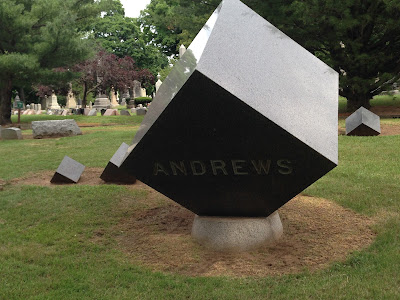 And here's someone who went for an old-school New England style headstone. The winged skull was long out of style when this person died, and the monument seems to be relatively new. Still, I admire someone who appreciates a classic look. 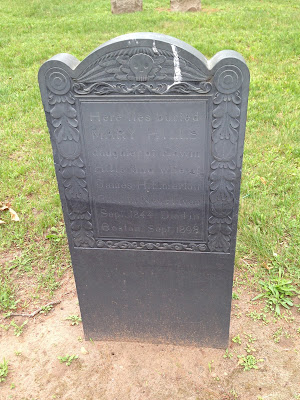 Midnight Mary's grave is at the back of the cemetery near Winthrop Ave, and is noted on the Evergreen Cemetery map as "resident ghost." It's good to know that the management acknowledges Mary's local importance. Her monument was erected in 1872, but looks newer because it was refinished in the early 1970s. The management of Evergreen Cemetery thought it was looking a little tarnished and asked a local monument maker to give it some touch ups. 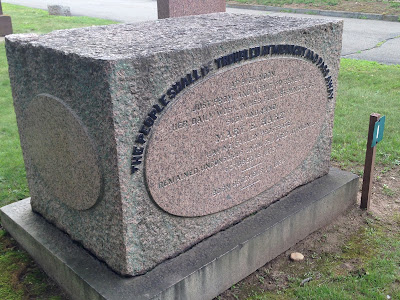 There are many creepy legends about Midnight Mary (aka Mary Hart), and they are all inspired by her strange epitaph:


THE PEOPLE SHALL BE TROUBLED AT MIDNIGHT AND PASS AWAY

At high noon
Just from, and about to renew
Her daily work, in her full strength of body and mind
Mary E. Hart
Having fallen prostrate:
Remained unconscious, until she died at midnight,
October 15, 1872
Born December 16, 1824

The ominous quote at the top "The people shall be troubled etc." comes from the Book of Job. The rest of it is equally ominous but a little mysterious. What does it all mean?

The exact facts of her death are not clear, so speculation abounds. According to one legend, after Mary's death on October 15 her family had her buried in Evergreen Cemetery. That night one her aunts had a nightmare that Mary was still alive in her grave. Unable to shake her bad feeling, she had Mary's coffin unearthed. When it was opened the aunt was horrified to see that Mary had scraped at the coffin lid. Mary's face was contorted with pain, and it was clear that she had died from asphyxiation. You see, Mary had not actually died on October 15, but had merely fallen into a deep cataleptic state that made her seem dead. When her aunt finally reburied Mary she erected the ominous monument as a warning to others. 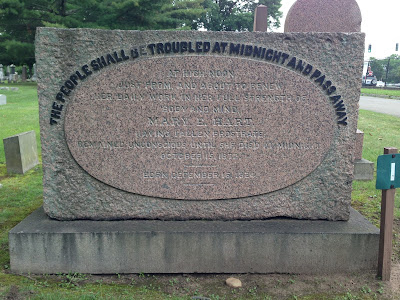 Many legends claim that Mary was a witch, and that she either rises at midnight to punish anyone who is near her grave, or that anyone who strikes her gravestone will die at midnight. For example, it is said that three teenagers came to her grave one night and struck her stone. Seven years later, one of them was found dead with his throat ripped out. The murderer was never caught. Seven years after that, the second teenager died the same unexplainable death. Finally, twenty-one years after striking Mary's grave, the final teen (now middle-aged) was found dead the same way. 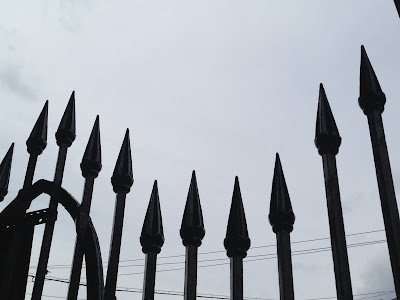 Another story claims that one night three sailors came to Mary's grave to see if she would rise at midnight. Just before midnight they heard something rustling nearby. Was it a bird? A rat? Mary's vengeful ghost? Not wanting to find out, the sailors ran towards the cemetery fence and tried to climb over, but they all slipped and became impaled on the iron spikes. They were found dead the next morning.

As you can see, most of the Midnight Mary stories have the same ending: people end up dead. According to David Phillips's book Legendary Connecticut, the most popular legend claims that two men went to Mary's grave to see if she would rise at midnight. Man #1 lost his nerve and left the cemetery, but Man #2 stayed to see if Mary would emerge from her grave. When he didn't show up the next morning Man #1 went back into the cemetery to find him. And find him he did - dead, with his face frozen in a terrified expression and his pants caught on a thorny bush. Apparently Man #2 had tried to leave the cemetery but died of fright when he got stuck on the bush. He thought Mary had grabbed him in the dark and his heart gave out. The lesson is clear: even if Mary's ghost is not real, her legend is scary enough to kill people. 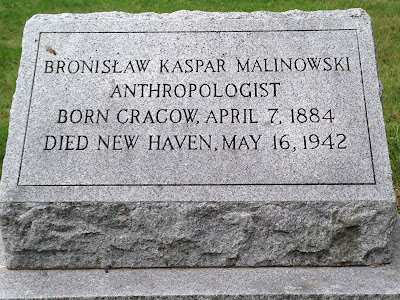 The famous anthropologist Bronislaw Malinowski is also buried in Evergreen Cemetery, and since I studied anthropology in college I visited his grave as well. Malinowski would have approached Mary's legend with a cool, analytical eye, wondering what social function her legend serves. 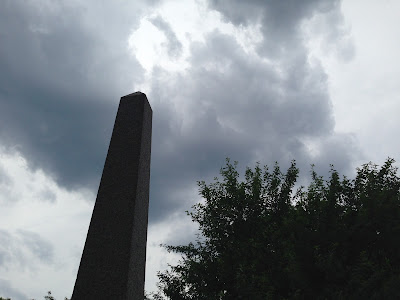 Would he have been spooked by the gathering thunderclouds? Would he have felt a little unnerved at being the only person in a large, ostensibly haunted cemetery? What would he make of the flocks of cawing crows that were in the trees?

I don't know what Malinowski would have felt, but by the end of my visit to Evergreen Cemetery I was definitely feeling a little creeped out. I'm happy I went, but I wouldn't want to be stuck there after dark.

Note: I originally posted about Midnight Mary back in 2010, but thought it was worth revisiting the topic since I actually had a chance to visit her grave!