It was great to see people at the Tewksbury Library this past week and at the Boston Book Fair, where I was promoting my book Legends and Lore of the North Shore. At the book fair I also met Sam Baltrusis, author of Ghosts of Salem and Ghosts of Boston, and Dee Martin, author of Boston in the Golden Age of Spiritualism. If you get a chance please check out their books! They're full of the weird stories and interesting legends that I really love.

Speaking of weird legends, Halloween is this Friday, and when Halloween rolls around I think of my favorite New England monster, the Pigman. An overall creepy fellow, the Pigman haunts a woodsy area outside Northfield, Vermont called the Devil's Washbowl. Just who is the Pigman? Some stories say he's the half-human offspring of a local farmer and a friendly pig. Others say he's a local teenager who ran into the woods and became feral.

The most detailed story claims he's Sam Harris, a teenager who set out to cause some mischief on October 30, 1951. October 30 is called Picket Night up in Northfield, and it's the designated night for teenagers to make pre-Halloween trouble by throwing eggs, toilet papering houses, and probably at one time stealing pickets from fences. Sam set out on that chilly October night many years ago an innocent teen, but went missing. Three years later he briefly returned home for just one night. Now a squealing madman, he strewed pig innards on his parents' porch, only to disappear again. His mother was driven mad by even this brief glimpse of her now monstrous son, and committed suicide by throwing herself into a pen of hungry hogs. Locals whispered that Sam had sold his soul to Satan, and that he now lurks in the woods wearing the head of a pig to cover his own deranged visage.

I first read about the Pigman in Joseph Citro's Weird New England, but I've found other legends and rumors floating around on the web. Here's one that appeared last year. Dim the lights for maximum creepy effect. 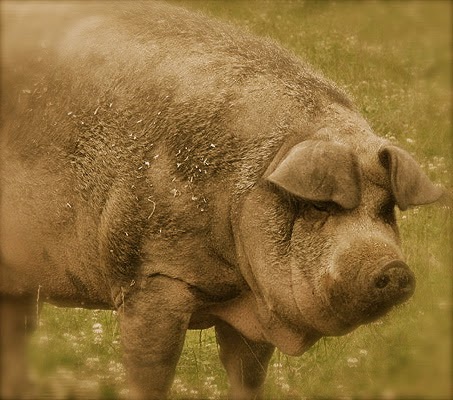 Back in the 1980s a group of high school seniors decided to go camping overnight in the Devil's Washbowl. There were some caves in the area, and recently hunters had found pig bones (freshly gnawed) in some of them. Were they the remains of the Pigman's dinner? The seniors thought they were and hoped to get a glimpse of the town's resident monster.

I think they were also hoping for some romantic action, since as the sun set they split up into couples, each taking a sleeping bag and flashlight and each settling into a different cave for the night...

I'll just interject here and say that anyone who has ever seen a horror movie knows this was a bad decision. Frisky teenagers. Dark woods. Separating the group. A hideous monster. I guess these were the rare teenagers who had never seen a scary movie.

Back to the story. The teens were settling in for a night of snuggling when they heard screams coming from one cave. Grabbing their flashlights they all ran to see what had happened. Inside the cave they found one of the girls, screaming hysterically. Her boyfriend was nowhere to be seen.

When she calmed down enough to speak, the girl said that as soon as she and her boyfriend had settled down to sleep a large man wearing a pig's head came into their cave. They shouted at him to leave, but without even hesitating he grabbed a rock and clubbed the boyfriend on the head. The Pigman threw the unconscious boy over his shoulder and stalked off into the night.

The teens frantically drove back to town and told the police what happened. Search parties looked through the woods for days, and although heavy footprints were found leading away from the Devil's Washbowl the searchers lost the trail in the leaf-strewn forest. No sign could be found of the boy or his abductor.

Desperate for leads, the police put up posters with the boy's photo around around Northfield. Only one person came forward. A man said a few nights ago he had been in his kitchen when he heard something rummaging around outside in the trash. Thinking it was a racoon, he turned on the porch light and went to chase the animal away. But it wasn't a racoon digging through his trash, it was the missing boy. The man recognized him from the poster.

But the poster wasn't quite accurate, the man said. He had definitely seen the same boy, but his eyes were strangely hollow looking, and his body was covered in long white hair.

Is this story true? It appears on a sight called Phantoms and Monsters, which is focused on UFOs, the paranormal, etc. It's written anonymously as a first-person account ("My sister and a couple of her friends went out to the Devil's Washbowl...") which would lead one to believe someone, somewhere said this all really happened.

However, a little poking around on the web showed that this version of the Pigman story was first posted on Reddit last year by  a user named William Dalphin. Dalphin writes horror fiction, so maybe this story isn't true. Or at least not entirely. It's in a section of Reddit for both true and fictional scary stories, so there's a little confusion. And the other Pigman stories are supposedly true, so I can understand why people think this one is.

The Pigman legend is relatively new, apparently first appearing in the 1970s. It's changing and growing over time, incorporating tropes and themes from popular horror movies and fiction. Will this story be passed on as true? For me, the Pigman stories are like good campfire tales told by someone who's seen a lot of horror movies. I'll be interested to see what new ones appear over time.

And the Pigman could be real, even if the stories about him change. Perhaps there really is some anomalous monster lurking around Northfield and people are just trying to describe him using the stories and themes that are familiar to them. Perhaps it's the only way the locals can wrap their heads around the hideous, porcine enigma. He's a monstrous blank slate for them to write their fears on.

I suppose the only way to settle the question of the Pigman's existence is for someone to spend the night in the Devil's Washbowl. I'll leave that to someone braver than myself.

My other Pigman posts are here and here, if you really want to stay awake all night.