The Shunned House: Facts As Strange As Fiction

Tony and I were in Providence visiting our friends Bill and Ed, and we decided to stroll down Benefit Street. If you've never been it's a worth checking out for the beautiful architecture.

Look at this photo of 135 Benefit Street. It's such a charming, well-maintained, historic house. Since it's near Brown University, you can also bet it's worth a lot of money. 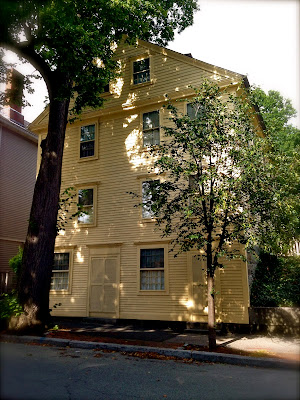 That wasn't always the case for this particular property. Providence has definitely gentrified in the past few decades, but before that some of these beautiful 18th century homes were downright wrecks. Here's how H.P. Lovecraft describes this house in his story "The Shunned House":

In my childhood the shunned house was vacant, with barren, gnarled, and terrible old trees, long, queerly pale grass, and nightmarishly misshapen weeds in the high terraced yard where birds never lingered. We boys used to overrun the place, and I can still recall my youthful terror not only at the morbid strangeness of this sinister vegetation, but at the eldritch atmosphere and odour of the dilapidated house, whose unlocked front door was often entered in quest of shudders.


Lovecraft's short story relates how a prosperous merchant named William Harris builds the house in the 1700s, but he, his family, and his servants slowly sicken and die. Strangely, his wife goes insane before dying and raves wildly in an obscure dialect of French - a language she never learned. Perhaps even more strange is the giant human-shaped patch of phosphorescent mold that grows on the damp cellar floor, which everyone seems to take for granted. Shouldn't they try to remove it? They didn't have dehumidifiers back in the 1700s, obviously.

One maid employed by the Harrises, a Rhode Islander from someplace wonderfully named Nooseneck Hill, thinks all the suffering might be caused by a vampire of some kind. In her part of Rhode Island people exhume, burn and then consume the hearts of suspected vampires, but the tasteful merchant family fires her for expressing her crazy ideas. They should have listened to her. All the mysterious deaths give the house such a bad reputation that no one, even the indigent, is willing to live there. The house becomes abandoned.

In the 1920s, a professor named Elihu Whipple and his nephew decide to investigate the house's unsavory history. They find that a Huguenot (French Protestant) family lived in the same spot in the 1600s. The Huguenot family, who were occultist descendants of an accused werewolf from the French town of Caude, were slain by a mob of their angry Providence neighbors and buried in unmarked graves near their home.

Professor Whipple and his nephew, armed with the latest 1920s scientific devices, decide to spend the night in the shunned house's cellar. I won't give away the final ending of the story, but since it was written by Lovecraft you can bet someone turns into a puddle of slimy yellow grease.

Lovecraft's "The Shunned House" is fiction, but given the sensational nature of this story it's surprising to learn much of  it is actually based on fact. OK, maybe some of those facts are a little legendary...

FACT: According to Charles Skinner in Myths and Legends of Our Own Land, there was indeed a human-shaped mold that sucked the life out of people. It seems likely Lovecraft used Skinner's story as an inspiration. Breathe easy, Providence. The vampiric mold was actually found in a house on Green Street in Schenectady, New York and is no longer malevolently active.

FACT: Up until the 1890s, many New Englanders thought consumption (tuberculosis) was caused by the recently dead feeding on their surviving family members from the grave. The cure was to burn and eat one or more of the vampire's internal organs. There were many documented cases of this alleged vampirism in Rhode Island, including most famously one Mercy Brown. The best book about this practice is Michael Bell's Food for the Dead. He also devotes a chapter to "The Shunned House."

FACT: There is a village called Nooseneck in Rhode Island. I hope they sell t-shirts!

FACT: There was a werewolf from the French town of Caude. Jacques Roulet was accused of transforming into a wolf and murdering a young boy in 1598. He was convicted and sent to an insane asylum. As far as we know, none of his ancestors moved to Providence.

FACT: A family graveyard was located at 135 Benefit Street before the Harris House was built. All the remains were moved to the North Burial Ground, but legend claims a few bodies were left behind, including those of a French Huguenot couple.

FACT: The house on Benefit Street was inhabited by a merchant named Harris, but his real name was Stephen, not William. According to Quahog.org, the Harris family did suffer some bad luck after building the house, including poverty, infant deaths, and the insanity of Mrs. Harris. Mrs. Harris was known to shout wildly in French - a language she had never learned.

Aw, nice! This house reminds me of many in Newburyport (sort of an HPL sister-city to Providence, yes?), which also (even within my memory) were once somewhat neglected and affordable (should you have wanted to dwell in the sinister miasmas of Newburyport) but became gentrified in the late 1970s, now afforded only by successful by accountants and lawyers -- but the houses are still pleasant to stroll past and to construct that historical-fantasy world we like to indulge.

I think you're right, Wade, that our chance to purchase historic real estate (miasmic or not) in southern New England has probably long slipped by. Lovecraft's depiction of rural New England was at least partially inspired by the large number of abandoned farms in the area when he was writing. I wonder how run down the urban landscape was at the time? The Shunned House doesn't look too shunned these days.

I love those Virgil Finlay illustrations. I can see where Rodger Gerberding got his early inspiration from.