Last week while we were down in Providence we stopped by St. John's churchyard. Because it was a beautiful day and we all like visiting cemeteries we had a nice time. But if we went at night it seems like I might be telling a different story. 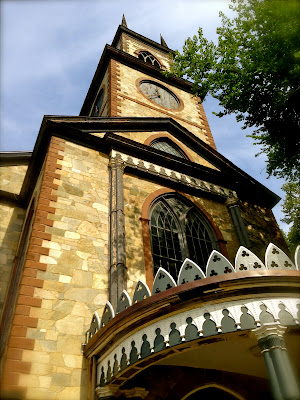 St. John's dates back to the early 18th century, and it's reflected in the gravestones. Rather than the grim skulls you see in older New England cemeteries, the monuments here are decorated with smiling cherubs, urns, and weeping willows. Providence was a well-established commercial port by the 1700s, and people were feeling a lot better about life (and the afterlife). 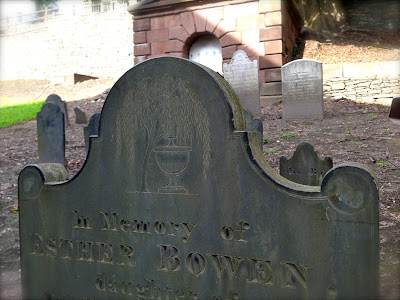 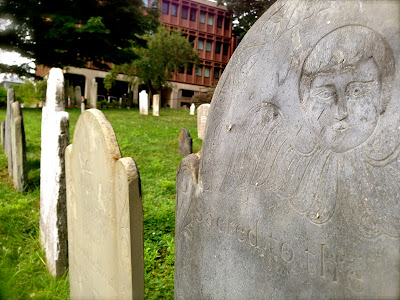 However, horror writer H.P. Lovecraft (1890 - 1937) reports having a different experience. He wrote the following to a friend:

"About the hidden churchyard of St. John's - there must be some unsuspected vampiric horror burrowing down there & emitting vague miasmatic influences, since you are the third person to receive a definite creep of fear from it ... the others being Samuel Loveman and H. Warner Munn. I took Loveman there at midnight, & when we got separated among the tombs he couldn't be quite sure whether a faint luminosity bobbing above a distant nameless grave was my electric torch or a corpse-light of less describable origin."


Lovecraft also admitted to a friend that he once sat on a tomb in St. John's to write rhyming acrostics of Edgar Allan Poe's name. What's the Poe connection? Well, Poe lived in Providence in the late 1840s while he was courting the poet (and Spiritualist) Sarah Helen Whitman, whose house was behind the cemetery. 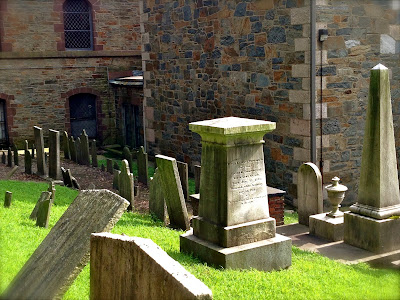 Lovecraft wrote in another letter, "...Poe knew of this place, & is said to have wandered among its whispering willows during his visit here 90 years ago." Although the willows have been replaced by a giant beech tree, St. John's is still an evocative place, rich with history and literary tradition. Oh, and maybe something emitting "vague miasmatic influences," if you're into that type of thing. 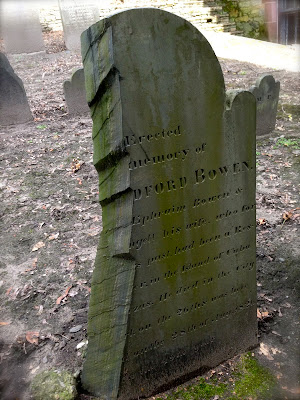 Next week I won't be posting about H.P. Lovecraft, but if you want to learn more about him be sure to  check out NecronomiCon, a convention dedicated just to this master of horror! I think the word "miasmatic" will be used often.  It take place August 22 - 25 in Providence and passes are still available.

I got my information for this post from Michael Bell's Food for the Dead, and from Dark Destinations.

Fantastic. I knew there was a Lovecraft connection, but I didn't know about the Poe connection.

I love your blog by the way!

Hi Linda! Thanks for reading. I'm sure you have some great folklore up in Montreal!

Christine, I really liked the Lovecraft/Poe double whammy. That's a lot going on in a small cemetery. Thanks for reading, and for mentioning my blog on Twitter. I really appreciate it!

Thanks for a great post. I especially appreciate knowing that Poe wandered among willows, and not the current beech.