I don't think I'm the only person fascinated by this sweet (but slightly salty) cornmeal mush. You can still find it on the menu at Boston's Durgin Park restaurant, and a recent article on Saveur mentioned some chefs outside New England who have added it to their restaurant menus. Maybe if I am lucky Indian pudding will become the new hipster fad and I'll be able to find it at lots of trendy local restaurants.

Until that happy day comes I'll have to either make my own or buy it canned. When I was a kid (many years ago now) I seem to remember having canned Indian pudding made by the One Pie company in Maine, but now it seems One Pie focuses mostly on canned pumpkin and canned squash. 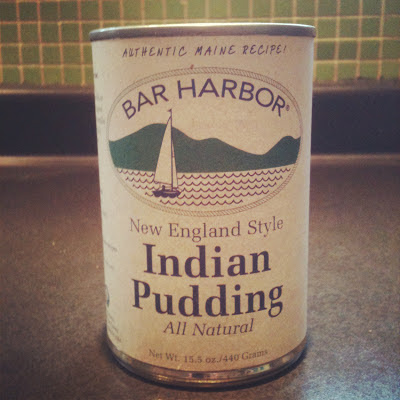 However, you can still buy canned Indian pudding from Bar Harbor Foods. I've seen it at Whole Foods, and the Stop and Shop in my neighborhood sold it this year starting around Thanksgiving. After Christmas it went on sale which gave me a perfect excuse to try it. 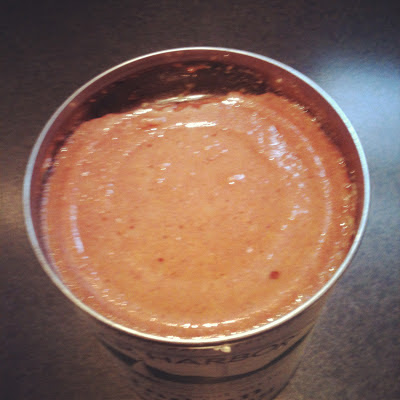 The label said "Good hot or cold!" so I decided to try some right out of the can. It wasn't bad (there's no such thing as bad Indian pudding) but it was pretty dense. I put some in the microwave for about a minute and then tasted it again. 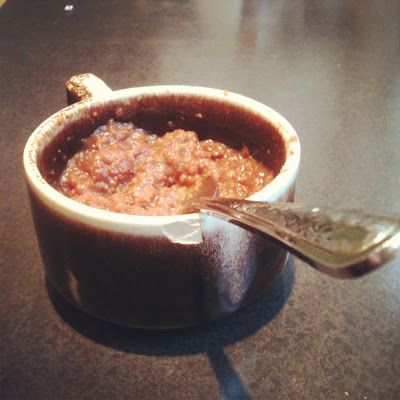 It was great! Heating it up really help blend the flavors, while the texture became much softer and more pudding-like. I didn't have any whipped cream or ice cream, but if I had it would have been a perfect Indian pudding experience. If you want some New England flavor at your meal but are rushed for time I think the Bar Harbor Indian pudding will do the trick.

I've lived here in New England all my life and somehow NEVER knew about this until today. Sounds good though!

Hi Soli! Thanks for the comment. I'm glad I could introduce another person to the wonders of Indian pudding.

Galyen's has Indian Pudding as one of their desserts. it can also be found at Hannefords, bottom shelf, right beside the Pumpkin pie filling.

Thanks for the update. I don't have a Hanneford's near me. Is Gaylen's Indian pudding good? I suppose there is really no such thing as bad Indian pudding...

Shaws sells it too. Yummy!!!

Now I can get my Indian pudding fix without going to Gray ME. Happy day in VA. Thanks

In the seventy's I was able to find canned Indian Pudding by Bar Harbor. . I can no longer find it anywhere. Making it from scratch takes hours. I shall try Shaw’s Supermarket.
This yummy dessert is great served warm with vanilla ice cream……wonderful memories.
Mary Costa-Garrett

My grandmothers always made Indian pudding when I was growing up in the 1970s and 80s. They lived in New Hampshire and Massachusetts. I loved it. Recently found it on clearance at Big Y in Mass. Yay!