How to Make a Poppet


I think most people are familiar with the concept of a voodoo doll. It's a small human figure meant to represent an individual for magical purposes.

The term "voodoo doll" is really a misnomer. Using dolls to cast spells has a long history, and isn't even particularly associated with Voudou, which is really an Afro-Caribbean polytheistic religion.

In colonial New England these dolls were known as poppets, which is an old spelling of puppet. They were often cited in witchcraft trials as evidence of malicious magic. For example, Goody Glover, and elderly Irish woman accused of bewitching several Boston children, had in her home

"several small images, or poppets, or babies, made of rags and stuffed with goat's hair and other ingredients. When these were produced the vile woman acknowledged that her way to torment the objects of her malice was by wetting of her finger with her spittle and stroking of these little images."

See? No pins are necessary to torment your victims, just a little spit. And Goody Glover later showed that your doll doesn't even need to be well made - a common stone will do.

Before her execution Goody Glover was visited in prison by Cotton Mather, who prayed for her soul. But, as soon as he was out of her sight, he said she "took a stone, a long and slender stone, and with her finger and spittle fell to tormenting it; though whom or what she meant, I had the mercy to never understand."

Goody Glover's trial happened in 1688, and set the stage for the Salem trials of 1692. Poppets once again played an important role. 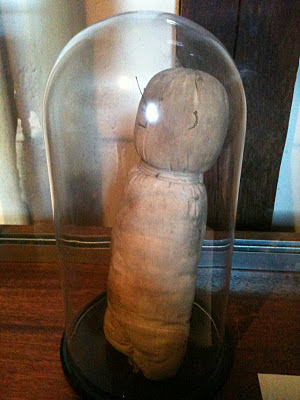 An early American poppet on display at the Salem Witch House.
Two men testified against Bridget Bishop that while doing work in her cellar, they tore down a wall to find "several poppets made up of rags and hogs' bristles with headless pin in them with the points turned outward..." This evidence helped make her the first person executed in the Salem witch trials.

Poppets were also used as evidence against Candy, a slave in the Salem Village house of Nathaniel Putnam. She kept in her room "a handkerchief wherein several knots were tied, rags of cloth, a piece of cheese, and a piece of grass." These must have been a very simple dolls indeed, but the afflicted girls claimed they could see the specters of Candy and the Black Man (i.e. the Devil) pinching the dolls, which caused them great pain. Candy was later forced to eat the grass, which she claimed burned her skin. Candy confessed to being a witch, and ultimately escaped execution.

Given all the bad energy surrounding poppets in this part of the country, I'm reluctant to provide specific instructions. However, I found this video (with peppy music) that shows you how. Watch it if you dare!

The quotes in this post were from Chadwick Hansen's Witchcraft at Salem.

I was doing some research in the Cavan County Library in Ireland, among the microfiches of children's school notebooks of the 1930s and 40s, in which they recorded local folklore for the Irish Folklore Commission. I came across a couple of items mentioning the bundling of oat sheaves and burying at the boundary of a neighbor one wished to harm; as the sheave slowly rotted, so too was the cursed person supposed to sicken.

Doug, wasn't that posted on Tony's door in college? At least he wasn't a poppet!

Wade, that's really interesting. Was anything done to the sheaves to make them resemble a person? I've read other European folklore about the last sheaves in the field. Often they were left there as an offering to some supernatural being, like the local faerie or demon.

My Husband and I have been together for 3years, we started having issues and we both broke up this years, after our fight over his cheating habits which they all say it's not their fault but I was the one getting hurt for it . I was upset over the whole issue that I had to call for the separation but I felt really bad. The separation really had effects on my daughter who had to live away from her father that I had to think of a way to settle things out and find solution to my husband's awkward behavior. I found out about a spell caster called Dr Adoda on this link ( http://www.dradodalovetemple.com ) who helped me with the problem to make my spouse come back to me and make him stop cheating. Soon, Richard came back to me begging at Sicily where I stayed after our divorce and I told him he has to show me he has changed for me to believe him. He came back twice after that day to Sicily begging me to have him back. Its been 2 months now since my husband came back to me and we have been living together since that day. I believe this man can also help you too in getting your Ex lover back. also you can call him or add him on Whats-app: +2348112825421.

Thanks for the post Peter! I find dolls kind of creepy in general but these warrant the feeling!