Getting Familiar with the Witch's Familiar

"Sarah Good, what evil spirit have you familiarity with?"
"None."
"Have you made no contact with the Devil?"
"No."
"Why do you hurt these children?"
"I do not hurt them. I scorn it."
"Who do you employ, then, to do it?"
"I employ nobody."
"What creature do you employ, then?"

In a modern court case, when the accused is asked about accomplices everyone assumes the accomplice is human. In the Salem witch trials, the accused were interrogated about their familiar spirits. The Puritans believed familiar spirits, or familiars for short, were demonic entities given to witches by the Devil to work their mischief. They often took the form of animals, but occasionally were also humanoid or monstrous in appearance. 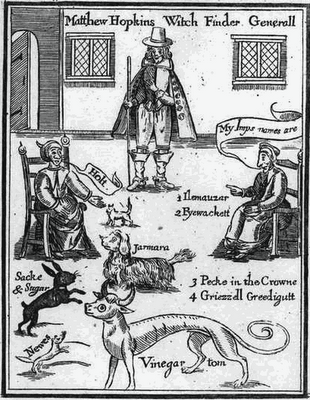 A 17th English century illustration of witches and their familiars.

The origin of this belief probably lies deep in mankind's past. In many societies, shamans make pacts with animal spirits to help them in their work for the community. Even in 17th century England, many cunning folk (magical practitioners who worked beneficial magic) claimed they derived their skills from familiar spirits, often a fairy of some kind.

Unfortunately, the Puritans in both old and New England didn't believe there could be beneficial familiar spirits. Familiars belonged to the realm of the Devil, and having a familiar was proof of selling yourself to that realm.

In Salem, people were accused of being served by a variety of spirits:


Perhaps you've heard the old saying, "It's colder than a witch's tit?" It seems likely that this phrase is derived from the belief that witches suckled their familiars from small, unnatural bodily protrusions called witch's teats. Familiars fed on a witch's blood, of course, not milk. These protrusions were allegedly cold and without any feeling. During trials, accused witches were stripped and searched for witch teats. Moles, pimples, and flea bites were misidentified and used as evidence of witchcraft.

I got most of this information, and the surreal descriptions of the familiars, from Chadwick Hansen's Witchcraft at Salem.

Next week: Crazy witchcraft stories from the Merrimac Valley!

Really interesting. I have had to teach the Salem witch trials a few times and the students always get a kick out of the name Dorcas. When I tell them she was locked in a dungeon and interrogated, and that she was only about 4 or 5, they think its less amusing.

I have never taught the kids about witch's familiars though. That little cocker spaniel type dog certainly looks sinister.

The little dogs are often the most likely to bite! I'm sure little cute familiars are the worst of them all.