Over the River and Through the Woods to Medford!

It also has a New England connection. As the show ends, after all the complications and emotional traumas have been resolved, the kids ride off to Charlie Brown's grandmother's house singing "Over the River and Through the Woods." Yay! A happy ending. (Then Woodstock and Snoopy eat turkey, which makes Tony wonder if Woodstock is a cannibal of some kind. I think the turkey is just a symbol of restored social order.)

The happy ending wouldn't be possible without Lydia Marie Child (1802- 1880) a novelist, abolitionist and cookbook author who was a native of Medford, Massachusetts. She wrote "Over the River..." for an 1844 book called Flowers for Children Volume II. The poem was originally titled "A Boy's Thanksgiving." You can see the full poem here.

The poem recalls Child's own trip to see her grandfather who lived near the Mystic River in Medford. His house still stands on South Street and is now owned by Tufts. 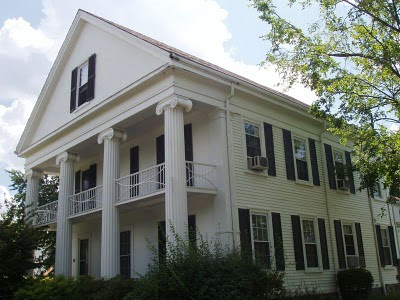 Grandfather's house image from this Tufts blog.
The tune for "Over the River and Through the Woods" apparently is from an old French folk tune but I'm not sure how it got connected to Child's poem.

These days some people are confused by the lyrics because they sound so wintry. Sleigh rides in November? Snow in Medford for Thanksgiving? Maybe she wrote it remembering one particularly cold year, or maybe the climate was different then. Global warming strikes again!

Because the lyrics are about snow, the song is sometimes associated with Christmas. I also think most people change the word's "grandfather's house" to "grandmother's house." We may be suffering from global warming but at least we have more equality between the sexes.

Have a great Thanksgiving. And as Charlie Brown says,"There's just one problem. My grandmother lives in a condominium!"

Email ThisBlogThis!Share to TwitterShare to FacebookShare to Pinterest
Labels: A Boy's Thanksgiving, Christmas, Lydia Marie Child, Medford Massachusetts, Over the River and Through the Woods, Thanksgiving

Another popular holiday song "Jingle Bells" was written by James Pierpont in Medford, too. Both songs mention sleigh rides because sleigh races were popular on Salem Street in the 1800s.

Heather - It's surprising two holiday classics came out of Medford. Maybe it was the Hollywood of the mid-19th century!

The timing of the writing of this song (1844) coincides with the "Little Ice Age," which lasted from the 16th century to the end of the 19th century. Snow was routine in November during this period.

Thanks for the comment. Have a great Thanksgiving today!

I walked past that house years ago and read the marker. Thank you for the timely reminder. I included a link to this post in my blog at www.everonward.typepad.com The blog is all about exploring New England on foot.

Thanks for sharing, Peter! You can't go wrong with Charlie Brown!