The Puritans who settled in New England weren't big on holidays. They didn't condone celebrations like Christmas or Halloween, which they thought were pagan and without Biblical validity. (I think some fundamentalist groups feel the same way even today!)

They did celebrate election day, however. Much as we do now, the Puritans would vote for their local officials in the fall, but they didn't take office until the following May. This day in May was celebrated as Election Day. By the mid-18th century parades, parties and athletic contests became part of the celebration. 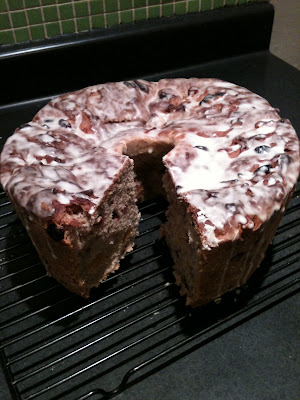 If only politics were as sweet and tasty as this cake!
One consistent feature of Election Day celebrations since the early 1600s was a special yeasted cake made with nuts, dried fruit and spices. Because these ingredients (and even flour and sugar) were quite expensive the cakes would only be made for special occasions.

I found this information in the 2009 Old Farmer's Almanac, which also had a recipe for the cake. Of course I had to try it! It wasn't too hard to make and was tasty in a mildly sweet way.

But there was something strangely familiar about the taste. It tasted like an Entemann's coffee cake! Maybe the people at Entemann's are using a 400 year old recipe?

If you don't want have last year's almanac lying around and you don't want to buy a coffee cake at the store, you can find recipes for Election Day Cake here and here. But make sure all that baking doesn't keep you from the polls!