Satan, the Pope and a Cross Dresser: Guy Fawkes Day

This week I have the post Halloween blues, so I'm writing about another raucous holiday. Halloween wasn't really celebrated in New England until the 19th century, when Irish and Scottish immigrants brought it to this area. However, before that people here did have a holiday with costumes, door-to-door begging, and even jack-o-lanterns: Guy Fawkes Day.

Guy Fawkes was an English Catholic who plotted to blow up the predominantly Protestant British parliament on November 5, 1605. Unfortunately for him, he was seen leaving the basement of the Parliament building, and officials soon discovered the gunpowder kegs he hoped to ignite. He and his co-conspirators were executed. November 5 became a holiday in England known as Guy Fawkes Day or Bonfire Night - it celebrated the foiling of the gunpowder plot.

Guy Fawkes Day didn't become popular in New England until the late 1600s. As I've mentioned many times, the area's Puritan leaders frowned on nearly all holidays, but surprisingly tolerated this one. I think its anti-Catholic tone supported their own theocratic agenda.

To celebrate gangs of boys and men would create one or more effigies, usually of Guy Fawkes, the Pope, and sometimes Satan. Once night fell they'd get drunk, put on costumes and parade around town with their effigies asking for money. At the end of the night they'd burn the effigies and set off fireworks. (It's not expressly documented, but the next morning everyone probably nursed a really bad hangover.) 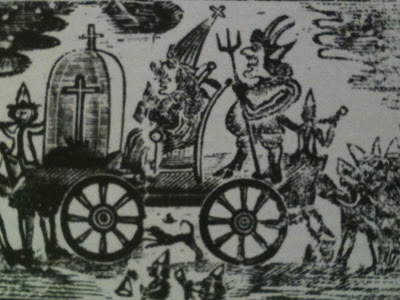 A 1769 woodcut showing a Boston wagon with Satan and the Pope.
In large cities the celebrations were be quite elaborate. For example, in Boston gangs of lower-class men and boys pulled their effigies around town on large wagons. The gang members also wore matching devil or choirboy costumes and hired musicians to accompany them. Engravings from the 18th century show these wagons topped with large effigies of the Pope and Satan. What they don't show is that one gang member often dressed in drag and danced on the wagon while lasciviously caressing the effigies.

In addition to the anti-Catholic bigotry, Guy Fawkes Day celebrations usually involved violence. Gang members would sometimes abuse people who didn't give them money, and rival gangs often battled to destroy each others effigies. In Boston, the North End and South End gangs were notorious rivals and frequently ended the night clubbing each other senseless. Innocent bystanders often got injured or worse during the festivities - in 1764 an infant in the North End was killed when it fell under the wagon's wheels. That year the constables dispersed the marchers, but they regrouped a few blocks away and continued.

After the American Revolution Guy Fawkes Day celebrations started to fade away. One theory is that New Englanders didn't want to offend their Catholic French allies who helped them in the war against the British, but a more plausible reason is that they no longer wanted to celebrate a holiday commemorating the salvation of the British government.

Guy Fawkes Day was still celebrated as late as 1893 in Newburyport, Massachusetts where boys paraded around an effigy while blowing horns and carrying jack-o-lanterns. (Jack-o-lanterns, which we now associate exclusively with Halloween, were originally used at any autumn party or celebration.) But by this time Halloween was popular in the U.S., and it eventually absorbed the costumes and general mischief of Guy Fawkes Day. The door-to-door begging for money became our modern practice of trick or treat.

I got most of this information and from an essay by Peter Benes in New England Celebrates: Spectacle, Commemoration and Festivity.

Thanks for sharing Peter, nice to know the Purtitans allowed some fun!