Tony and I recently went up to northern New Hampshire to visit family, and the trip took us through Franconia Notch near Cannon Mountain. Luckily the weather was good, because when it's bad driving through the Notch is miserable.

In the early 1800s, a local man named Thomas Boise found out just how miserable. Boise was heading through the Notch on a horse-drawn sleigh when a howling snowstorm struck. He tried to drive the horse through to the comparative safety on the other side, but his efforts were futile. There was too much snow, and the horse, sleigh and Boise became stuck in Franconia Notch in blizzard conditions. 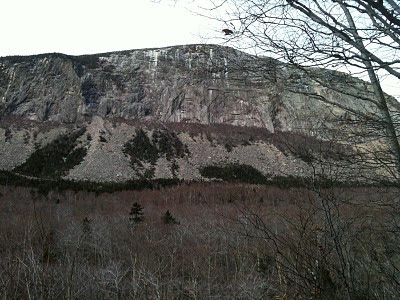 The foreboding cliffs of Cannon Mountain seen from Franconia Notch.
Fearful that he would freeze to death, Boise devised a gruesome but ingenious plan. He killed and skinned his horse, and then wrapped himself in its warm bloody hide. A convenient overhanging boulder provided extra shelter during the storm.

His plan worked. The next day a rescue party found Boise alive and wrapped in the horse hide under the boulder. The hide had been frozen solid, and the rescuers had to cut him out of it with axes. 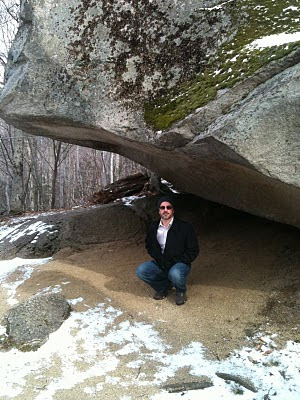 Tony under Boise Rock. Just a light dusting of snow!
Luckily these days most travelers don't need to go to such extreme lengths, but the overhanging boulder (now called Boise Rock) is still around in case you need emergency shelter. It's right off Route 93 and there's a sign guiding you right to it. It's not the most exciting tourist attraction in the area, but I like the legend attached to it.

Thomas Boise's story reminds me a little bit of The Empire Strikes Back, where Han Solo saves Luke from freezing by putting his body into the dead body of a steed called a Tauntaun. Maybe this is a recurring theme in folktales? If anyone has more examples I'd be happy to hear about them!

Hi Peter! Glad you brought up, "Empire," I was thinking the same thing. Nice post.

I think Jack London refers to the slice-a-critter method of keeping warm in one of his novels.

Thanks for sharing, Peter! I immediately thought of Empire too but at least the critter died before Han used it to keep Luke warm!