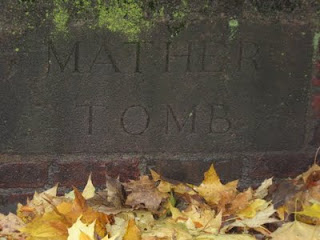 Thanksgiving is over, so now back to some witchcraft and the occupants of the Mather tomb on Copp's Hill. Its second famous occupant is Cotton Mather, Increase's son.

Cotton was born in 1663. Although he had a stutter, that didn't stop him from entering Harvard University when he was 12 years old. By 25 he was the minister of Boston's North Church. (Note: don't confuse this with the famous Old North Church in the North End, which is an Episcopal church built in 1723). Like his father, Cotton was a prolific writer, producing more than 450 pamphlets and books on religious topics.

Also like his father, Cotton is now most famous for his role in the Salem witchcraft trials.
After the trials ended, Cotton published On Witchcraft: Being the Wonders of the Invisible World, which described the Salem trials and argued for the reality of witchcraft. His timing couldn't have been worse. Public opinion had turned by this point, and the people of Massachusetts now felt the trials were a tragedy and abuse of power. Cotton Mather didn't change his opinion, though, and continued to insist the people convicted in Salem were actual witches.

His reputation suffered greatly, particularly after Boston merchant Robert Calef published Another Brand Pluckt Out of the Burning or More Wonders of the Invisible World, which parodied Mather's book and portrayed both Cotton and Increase as dirty old men who liked watching young girls writhe around pretending to be possessed.

Cotton's reputation suffered permanent damage, and he was refused the presidency of Harvard University. He helped start Yale University instead, and finally died in 1728.

(As for my earlier post on Increase Mather, most of my information comes from Rosemary Ellen Guiley's The Encyclopedia of Witches and Witchcraft. )

Thanks for the post Peter! I wish I could say these days are over but that we still allow people to turn us against each other and make us suspicious of our neighbors.