A Story for Bear Hibernation Day 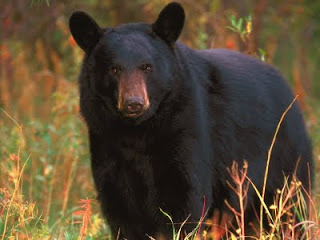 A black bear - photo from this site.
According to The Old Farmer's Almanac, today (November 8) is the day when black bears return to their dens for the winter. Hmmm. I wouldn't go walking in the woods covered in cheese just yet, though. I'm sure bears really decide when to hibernate based on things like temperature and food supply, not the calendar.

I wouldn't really be surprised if bears did have calendars, though, since they're the most human-like animals in New England. They can walk on two feet like us and they're omnivorous like us. That's one reason bears appear in so many fairy tales and folk stories.

The Wabanaki tribes of Northern New England have plenty of stories about bears. Many of them are variations on this story, "The Bear Abductor", which I found in Frank Speck's 1935 article "Penobscot Tales and Religious Beliefs." (FYI, the Penboscot are one of the five tribes that make up the Wabanaki; the others are the Abenaki, Passamaquoddy, Maliseet and Micmac).

The story goes something like this: once upon a time, a little boy and his parents were out looking for berries in the woods. They searched for quite a while, but didn't have much luck. Finally, when they found a rich berry patch, they put the boy down so they could pick the berries. After all, what harm could befall him in the woods? But when they were done, they were horrified to see their son had disappeared. They had only turned their back for a few moments, and now he was gone.

They searched for days but couldn't find him. Eventually they gave up and assumed he was dead. But he wasn't dead. Instead, a bear had taken him while his parents weren't looking. It carried the little boy off to his den, and raised him like his own child, teaching him how to hunt, how to forage for food, and how to run on all fours. For seven years the boy lived happily as a bear.

One day the bear father told him they were being tracked by hunters, and that they would catch and kill the bear. Before this happened, he returned the boy to his human parents. Before letting him go, he made the boy promise to never kill a mother bear. The boy solemnly swore this and ran into his old house on all fours. The hunters caught up with the bear and killed him.

The boy's human parents were overjoyed to see him, having thought he was long dead. They were a little puzzled that he walked on four legs and couldn't speak like a person, but in time he re-learned to be human. However, from his time as a bear he still remembered two things: how to hunt, and the promise he made.

Eventually the boy became a man and got married. Because of his hunting skills, he provided well for his wife, who feasted on every type of game the forest provided. But there was one thing she craved she never got to eat: bear meat.

He searched through forest for quite a while, but didn't have much luck. Finally, he sighted a bear. A mother bear. He thought briefly of the promise he made to his bear father, but let the thought go. He had made the promise as a child, and was now a man. He pulled back the string of his bow. He released the arrow, which found its mark in the bear's heart. She died quickly. And when she died, the boy disappeared, never to be seen again.

Thanks for the post Peter! I always love reading a Native American legend!