I restrained myself from writing about witches throughout October, and focused on monsters instead. Now it's November, and I'm free again to about witches and all things witchy.

So, here's a photo the Mather tomb on Copp's Hill in Boston. When I hear the name Mather, I think of witches. The Mathers buried here would spin in their graves to hear that, but it's true. 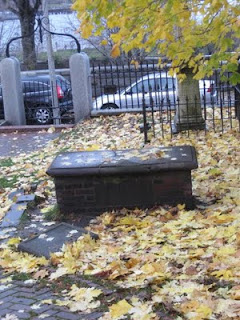 Increase Mather was born in Dorchester, Massachusetts in 1639. The son of a prominent Puritan minister, he graduated from Harvard in 1656 and eventually became the pastor of Boston's North Church. He was also the president of Harvard from 1685 to 1701.

Where's the witchcraft connection? Well, as the most important minister in New England, he became very concerned when reports of witchcraft reached him. Clearly, he said, it was caused by a lack of religion in Massachusetts. (How much more religious could the colony have been? It was already a Puritan theocracy.)

To combat the rising tide of evil, he wrote An Essay for the Recording of Illustrious Providences, which described cases of witchcraft and supernatural happenings. It was a huge hit. Even though the colony was a theocracy, people still wanted to read juicy stories about unseen demons pelting New Hampshire farmers with stones and possessed serving maids with giant tongues in Groton blaspheming God.

When the Salem witch trials began, Increase did not get directly involved. Instead, he published another tract, this time titled Cases of Conscience Concerning Evil Spirits Personating Men; Witchcrafts, Infallible Proofs of Guilt in such as are Accused with the Crime, which urged people to be cautious in accepting spectral evidence during the trials.

Spectral evidence was basically psychic hearsay accepted as proof of witchcraft. For example, during a trial an allegedly bewitched girl might say, "Ahh! Goodwife Corey is biting me on the arm!" The judges would accept this as evidence even though: 1. no one else saw Goodwife Corey bite the girl, and 2. Goodwife Corey and all the other witches were restrained in plain sight of the court. Since she was a witch, it was assumed she could send her spirit to cause mischief even while restrained.

Showing some wisdom, Increase Mather thought spectral evidence was not sufficient to convict someone. He didn't show as much wisdom as one might hope though, because here's what he did consider sufficient evidence: testimony from neighbors, and "the fact that some of the afflicted girls were relieved of their fits when a concoction of rye paste, water and the hair and nail clippings of the accused witches was mixed together and set afire."

Needless to say, once the hysteria died down and it was revealed that the bewitched girls had been faking, people in Massachusetts wanted Increase to recant and admit he was wrong. He never did, either out of pride or because he was friendly with the trial judges. His reputation suffered but not as badly as that of his son Cotton, who I'll write about soon.

(I got most of my information from Rosemary Ellen Guiley's The Encyclopedia of Witches and Witchcraft. )

I read a book called "By Faith Alone" by Bill Griffeth which devoted a whole chapter to the Salem witch trials. I purchased the book from New England Historic Genealogical Society (NEHGS) earlier this year. I would recommend it.

The book is subtitled "One Family's Epic Journey Through 400 Years of American Protestantism." In it, Mr. Griffeth tells his family history, including that part in which one of his ancestors, Mary Towne Eastey, was hanged for wichcraft. He gives verbatim parts of the trials, along with the incidents which led to the accusations. It struck me as a very even-handed treatment of these happenings.

Thanks for the recommendation. I'll try to find a copy!

Hi. You also might be interested in reading my newly published historical novel: THE AFFLICTED GIRLS A Novel of Salem by Suzy Witten (ISBN: 978-0-615-32313-8) (Amazon, B&N.com) (Published 11/09). In it, I offer a brand new theory of the afflictions, which is certain to put this 300-year-old unsettled mystery to rest and rewrite the history on Salem. More info is available on the book website: www.theafflictedgirls.com

Thanks for the post Peter! It's always a sad part of human nature - the willingness to join in on persecuting another.