Dreams in the Witch House: Lore, Familiars, and the Devil's Book

This week I've been reading "The Dreams in the Witch House," H.P. Lovecraft's classic 1932 tale of witches, creepy little monsters, and non-Euclidean calculus. This is one of those Lovecraft stories I come back to repeatedly, and re-reading it this time I was struck by how Lovecraft incorporates real New England folklore and history into it. Much of the story is focused on how one becomes a witch, something that was central to the 17th century Puritan witch trials. There is also a particularly creepy familiar spirit in it.
Here's a basic plot summary, but you can also read the story yourself here. Walter Gilman is a college student at Miskatonic University in Arkham, Massachusetts, where he is studying mathematics and folklore. Gilman is convinced there is a connection between advanced mathematics and the old New England witch stories, and his research leads him to rent a room in a squalid boarding house that was built in 1600s known as the Witch House.
Gilman's room was once the abode of Keziah Mason, who was arrested for witchcraft during the Salem witch trials. Under questioning, Mason told Judge John Hathorne that certain lines and angles could be used to move "through the walls of space to other spaces beyond," and then later disappeared from her locked jail cell. Strange geometric curves and angles were found drawn on the cell's walls with "some red, sticky fluid." Centuries later, Keziah Mason is said to haunt the Witch House where she once lived, appearing there at night with Brown Jenkin, a human-faced rat that serves as her familiar spirit.
Gilman thinks Mason knew the secret of traveling through other dimensions. Soon in his sleep he dreams that he can too, inspired by his study of mathematics and the strange angles of the walls and ceiling in his room. In his dreams, he flies through "limitless abysses of inexplicably coloured twilight and bafflingly disordered sound; abysses whose material and gravitational properties, and whose relation to his own entity, he could not even begin to explain." He dreams that he visits other planets, including a world whose heavy gravity almost crushes him, and one where he sees a vast city and strange non-humanoid beings. In his journeys he also sees Keziah Mason and Brown Jenkin, who seem to be following him around the universe in his dreams.
Spoiler alert: Walter Gilman is not dreaming. He really is traveling through the universe and other dimensions, and Mason and Brown Jenkin really are following him. Since he has intuitively and unconsciously mastered the art of extra-dimensional travel, they recognize him as a fellow witch, and want him to be fully initiated into the dark mysteries of witchcraft:

He must meet the Black Man, and go with them all to the throne of Azathoth at the centre of ultimate Chaos. That was what she said. He must sign in his own blood the book of Azathoth and take a new secret name now that his independent delvings had gone so far. What kept him from going with her and Brown Jenkin and the other to the throne of Chaos where the thin flutes pipe mindlessly was the fact that he had seen the name “Azathoth” in the Necronomicon, and knew it stood for a primal evil too horrible for description.

Oh, and they want him to sacrifice a human infant as well. I won't give away the ending, but it's one of the gorier and gruesome endings to a Lovecraft story.
H.P. Lovecraft loved New England and its history, and incorporates lots of local references into "The Dreams in the Witch House." John Hathorne (mentioned above) was a real Salem witch trials judge and an ancestor of Nathaniel Hawthorne; the infamous Cotton Mather is mentioned as well. Walter Gilman's hometown is Haverhill, Massachusetts, the same as me! One of his mathematics instructors at Miskatonic University is Professor Upham, a name possibly inspired by Charles Upham, the historian who wrote Salem Witchcraft (1867), one of the first important studies of the Salem trials. And there actually are several buildings in Massachusetts called the Witch House, including the most famous one in Salem.
The crux of the story is whether Gilman will become fully initiated into witchcraft. Will he sign his name into the Black Man's book using his own blood? Lovecraft pulled this concept directly from records of the New England witchcraft trials. The Black Man was a Puritan term for the Devil, and he and his book were mentioned in many witchcraft trials. The book was a Satanic parody of the Bible and of the covenants that Puritans signed when they joined churches. According to the Puritans, signing your name in the Black Man's book made you a witch. Lovecraft made up the part about sacrificing an infant, though. That does not appear in any New England witch trials, although certainly witches were accused of harming babies and children. The Puritans also believed that the Devil would baptize his witches after they signed the book, which doesn't appear in Lovecraft's story. It's probably just too tame for a horror story.
Brown Jenkin, Keziah Mason's familiar spirit, is very similar to the familiars found in New England witch trials. The Puritan's claimed that the Devil gave witches small demons, called familiar spirits, to do their bidding. In return, the witches just had to feed them with their blood. The trials of the Salem witch trials mention familiar spirits who appeared in a variety of forms, including birds, cats, and wolves. Like Brown Jenkin, some appeared as monstrous hybrids. For example, Bridget Bishop was accused of having a familiar that looked like a monkey with rooster feet and a human face, and Sarah Osborne's familiar was supposedly a small humanoid covered in hair. Lovecraft's Brown Jenkin would fit right in with these two.
One interesting thing I noticed on re-reading "The Dreams in the Witch House" is that Keziah Mason and Brown Jenkin are trying to help and protect Walter Gilman during his trips through space and time, even though he doesn't realize it. For example, when he finds himself on a planet with heavy gravity they show him how to travel back to Earth. It's only when he refuses to sign the book that they become hostile towards him. He's not acting the way a witch should!
"The Dreams in the Witch House" has been filmed at least three times, once in 2005 as part of the Masters of Horror anthology TV series, and also as a low-budget movie earlier this year, at last according to Amazon Prime. A version of "The Dreams in the Witch House" will also air later this month as an episode of Guillermo del Toro's new anthology Netflix show Cabinet of Curiosities. I hope they include all the weird New England witch references in it!
*****
If you want to read more about New England witches, please check out my book, Witches and Warlocks of Massachusetts. It's available wherever books are sold online and is perfect October reading! 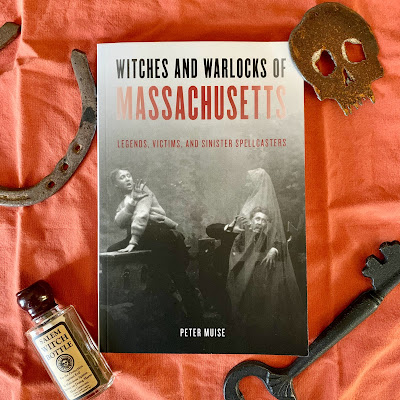