Many years ago, a farmer was walking home through the countryside late at night. He felt a little spooked because the road was dark and lonely.

After walking for a while he saw a strange procession walking towards him in the gloom. Nine black cats were carrying a tiny black coffin draped in velvet. It was a funeral procession.

As the cats walked past him, one turned to the farmer and said, "Tell Tom Tildrum that Tim Toldrum is dead." The farmer was too shocked to reply and the cats processed off into the darkness.

The farmer was relieved to get home. The fireplace cast a cheery glow, and his wife greeted him with a bowl of warm soup. Their cat lay sleeping by the fire, as it did most nights. Everything seemed normal.

As he ate his soup, he told his wife what he had seen. "And then," he said, "one of the cats turned and spoke to me. It said, 'Tell Tom Tildrum that Tim Toldrum is dead.' What do you think that means? Who is Tom Tildrum or Tim Toldrum?"

Upon hearing this, the farmer's cat opened its eyes and stood on its hind legs. It seemed to grow in size and importance. The cat said, "Tim Toldrum's dead? Then I'm the King of the Cats!" It howled triumphantly and flew up the chimney, never to be seen again.

You may have heard that story before. It's an old folk tale called, appropriately enough, the King of the Cats. There are many versions of it, mainly from England, Scotland, and Ireland, but there are some from continental Europe as well. The gist of the stories is usually the same, although the cat names vary: Dildrum and Doldrum, or Madam Momfort and Mally Dixon, or Dan Ratcliffe and Peggy Poison. At the end, though, the humans always discover their humble domestic pet was secretly a special supernatural being. 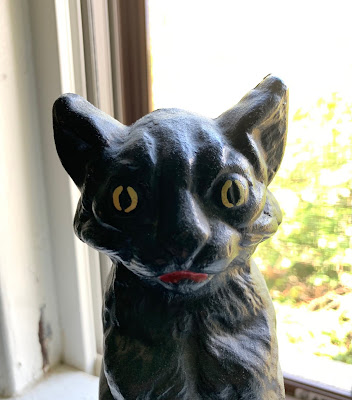 A strange New England version of King of the Cats was printed in The Journal of American Folklore in 1908. Author Clara Kern Bayliss noted the following:

WITCHCRAFT - At Shaftsbury, Vermont, eighty years ago, the belief in witches was quite general, and even the children knew the rhyme which brought disaster into the family circle; for it often happened that a witch would come down the chimney in the form of a black cat, and say, -

That sits by the fire

The similarities with the King of the Cats story are obvious. The black cat which speaks, the cryptic names and announcement of a death, and even the fireplace - all of these are shared with other versions of the story. But rather than ending in a surprise revelation, the Vermont version ends in death.

It's kind of strange to see a playful story transformed in this way, but it's totally understandable given New England's history and culture. England, Scotland, and Ireland have lots of lore about fairies and other magical beings. A story whose ending reveals that a common house cat is magical nobility fits in well with fairy lore, and some version of the King of Cats are explicitly about fairies.

When the Puritans colonized New England they did not bring their mother country's fairy lore with them. However, they did bring lore about witches. Lots and lots of it!

It was believed that witches could transform themselves into animals, and sometimes even speak in animal form. So in the Puritan worldview, a talking cat would not be feline nobility or a fairy, but would instead be a malevolent witch. And what do witches do? Cause misery and death. The core for the story remains, but the ending is quite different and reflects old New England's grim culture.

...for it often happened that a witch would come down the chimney in the form of a black cat...

I have so many questions about that word "often." Was this a weekly occurrence? Monthly? Life in 19th century Vermont sounds really dangerous. It makes me glad I don't have a fireplace.

Lol - I do have a fireplace and now I wonder how many witches I may have left in inadvertently!