It's a classic urbanite fantasy. You'll escape all the stresses of big city life by moving to the country, where you'll live in a big farmhouse, grow crops, and make your own strawberry preserves. Maybe you'll raise some goats and sell artisanal cheese. Your life will be like a never-ending Martha Stewart photo shoot.
It's definitely something I've fantasized about, but I realize I'm probably not suited for country life. I haven't lived less than a ten-minute walk from a subway stop in the last thirty years - how am I going to shear sheep? And who knows what lurks out there in the countryside? After all, that same escapist fantasy is also the premise of many horror films.
Last night we watched one of those films. Let's Scare Jessica to Death (1971) tells the story of Jessica (Zohra Lampert) and Duncan (Barton Heyman), a married couple who move from New York City to rural Connecticut. Jessica is recovering from some type of nervous breakdown, and Duncan thinks quiet country living will help the recovery process. Their friend Woody (Kevin O'Connor) comes with them to help manage the apple orchard at the old farm they've bought. 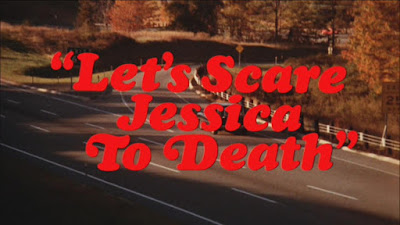 Their move to Connecticut isn't quite the idyll they hoped for. On their way to the farm the trio stops at a historic cemetery for some sightseeing and Jessica sees a feral-looking woman in a white gown. In their new hometown they encounter a group of surly and disapproving old men, all strangely bandaged and wounded, at the general store. And at their farmhouse they discover an attractive bohemian young squatter named Emily (Mariclare Costello) who disrupts the group's equilibrium.
I first saw Let's Scare Jessica to Death on TV when I was a kid, and rewatched because I'm in the mood for some New England atmosphere. The movie was actually filmed on location in Connecticut in the autumn of 1970 and it makes the most of the setting. There are shots of an old 19th century farmhouse shrouded in fog - real fog, not smoke machine fog. Jessica traipses through a field of blooming goldenrod and an orchard whose trees are covered in red apples. When someone drives down the road I saw a maple tree that had just lost all its leaves in the background. The characters visit an antique store in a barn, a common sight across the area.
Seeing these scenes is like comfort food for me, particularly now, but it's a horror movie, not a video promoting tourism. The antiques dealer tells them the house they bought might be haunted. A young woman named Abigail Bishop drowned on the property, he says, but her body was never found. Local folks say she now roams the countryside as a vampire, eternally frustrated because she never got to marry and wear her wedding gown. Needless to say, the legend of Abigail Bishop doesn't sit too well with the still fragile Jessica.
Abigail Bishop's vampiric ghost is at the heart of Let's Scare Jessica to Death and is open to many interpretations. Maybe she's just a figment of Jessica's imagination, something the movie hints at repeatedly. Abigail might also be symbolic of the characters' unspoken sexual needs and fears, particularly as they explore the new social norms of the late 1960s.
The movie was made when America's hippie counterculture was still strong, and although the main characters are too old to be true hippies they are clearly toying with the hippie lifestyle. Instead of a traditional car they drive an old hearse with a peace sign painted on the door, and their move "back-to-nature" is straight from the 1960s counterculture playbook. Abigail's ghost is the dark side of that counterculture, the footloose Manson girl who'll party with you and then quite literally drink your blood.
She might also represent the spirit of the land itself, a grim genius loci who doesn't really approve of outsiders. Abigail Bishop is rooted in the town's history, in its lakes and coves, its orchards and old cemeteries. Her ghost is often shown in beautiful natural settings. The local old-timers have learned to live in harmony with their town's rapacious spirit, but the newcomers find out there's more to country life than sing-a-longs and antiquing.
There really were cases of alleged vampirism in Connecticut. Folklorist Michael Bell discusses three of them in his excellent book Food for the Dead: On the Trail of New England's Vampires (2001). They weren't the seductive sexual predators we see in movies, but rather were victims of tuberculosis who died. When their relatives also became sick they thought the recently deceased person was feeding on them after death. The only way to stop the "vampire" from feeding was to unearth the corpse and burn its heart. It sounds unbelievable, but Bell has evidence that the practice continued up until the 1890s. This type of vampirism is very different from what's portrayed in Let's Scare Jessica to Death but it serves as a reminder that beautiful rural landscapes often have unpleasant histories.
The movie alludes directly to one of those histories early on, when Jessica visits a cemetery to make some gravestone rubbings. The scene was filmed in East Haddam's First Church Cemetery, and Jessica makes a rubbing from a real gravestone, that of Venture Smith, a former slave who died in 1805. In 1798, Smith wrote a narrative of his life and as you might imagine it is full of violence and abuse. In the movie, Jessica decorates the bedroom of their new home with graverubbings, and Venture Smith's is taped right above the bed she shares with her husband. To her Smith's life is a charming relic, an attitude showing she and her friends are unfortunately clueless about the real history of their new home.
Let's Scare Jessica to Death has a minor cult following, and several people have tracked down the various locations where it was filmed. The farmhouse in Old Saybrook where many of the exterior scenes were shot is now a decaying ruin. The house was surrounded by wide open fields when the movie was made in 1970. Now, fifty years later, the woods have reclaimed the land and will probably reclaim the house soon too.
Let's Scare Jessica to Death isn't a perfect movie, but it's an interesting one, and definitely worth watching if you want to experience some unsettling New England folk horror vibes.

This is quite an interesting review and now I’ll have to watch this film. I’m also interested in looking up the filming locations since my wife and I love rural Connecticut. 👍🏻

One of my favorites. I need to rewatch it. And take another drive to Connecticut!