This is definitely shaping up to be one of the stranger Christmases in recent American history, with most of the traditional festivities being canceled due to the pandemic. So why not cozy up by the Yule log (even if its on your computer screen) and enjoy some old New England folklore about Christmas?

As a lot of you know, for many years Christmas was not celebrated in New England. The Puritans didn't believe there was any basis for it in the Bible - the date of Jesus's birth is not given, after all - and suppressed Christmas celebrations here. New Englanders began to celebrate the holiday more widely in the 19th century as the Puritan influence weakened, and all of the folklore I present to you is from the late 19th century.

Much of it concerns the weather, since Christmas falls close to the astronomical start of winter. I'm just going to give you the grimmest piece of lore first. Let's get it over with.

A green Christmas make for a fat graveyard.

Ugh. That's from Fanny Bergen's 1896 book Current Superstitions. This next one comes from Clifton Johnson's What They Say in New England (1896):

A green Christmas makes a full churchyard. The foundation for this saying is the fact that open winters with their constant freezings and thawing are very unhealthy.

I don't think there's any medical validity behind that, do you? I hope not, because with climate change we're going to get more "open winters." I'm going to chalk this one up to old time Yankees considering almost everything as an omen of death, which is true. These folklore books have a huge number of death omens. I think those sayings also demonstrate the law of inversion that shows up sometimes in folklore. A green, pleasant Christmas foretells death, or the groundhog seeing his shadow on a sunny day indicates six weeks of bad weather. Something foretells its opposite. 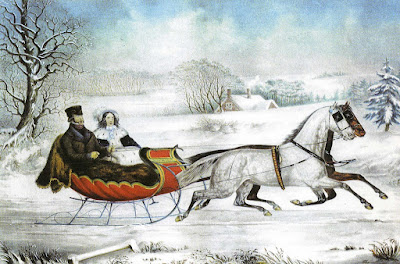 Here's another one from Clifton Johnson, which is less grim:

Half the pork and half the hay

Johnson notes that men used to visit their neighbors on Christmas to see how the hay and pork were holding out. It sounds very bucolic and a nice way to see folks, doesn't it? It's also practical. On Christmas there are still three more months of winter to come, so you definitely want to have enough food for your livestock and yourself. There are similar sayings about Candlemas Day on February 2.

To me, the most magical piece of Christmas folklore is the following:

There is a saying that on the night before Christmas when the clock strikes twelve the cows kneel in their stalls. Some young girls in Hadley, years ago, sat up to discover whether this was true or not. At midnight they went out to the barn, and sure enough when the hour struck the cows knelt. At any rate, that was what the girls said. (Johnson, What They Say in New England)

That story is very similar to the European belief that animals can talk at midnight on Christmas Eve. The exact origins of that legend are murky, but are probably tied to the belief that Christ was born in a stable. Some sources say God allowed the animals in the stable to speak so they could praise the newborn messiah, something they have been able to do once a year ever since.

The New England version of the legend is a little more subdued. It's as if people wanted to believe in Christmas magic, but couldn't fully commit. "Talking cows? No way. Cows that kneel at midnight? Hmm. Well, maybe..." It's interesting that Johnson has the caveat "At any rate, that was what the girls said," as if he or his informant knew people would receive the story with skepticism.

He also includes this version of the legend:

A still older story told in town with the same theme is that at midnight when the Christmas Day begins, all the cattle in the yards and fields might be seen kneeling with their heads turned towards the east in adoration. Two girls of the olden time, who were eager to see for themselves whether this was true or not, sat up on Christmas Eve until the spellbound hour, and then visited the farm cattleyard. But the cattle made no sign that they were at all affected.

So which is it? Do the cattle kneel or not? For now, I am comfortable with the ambiguity and holding both possibilities in my mind. Please let me know if you happen to say up until midnight to see what happens. I'd be curious to know.

Have a safe and happy Christmas!

Thomas Hardy, English poet and author of novels such as "Tess of the D'Urbivilles" wrote a poem called "The Oxen" about the old tradition of animals kneeling at midnight on Christmas Eve. Sums up so much of my own ambivalence towards Christianity that I read it every Christmas Eve at 12 of the clock. Thank you for your post.

Thomas Hardy, English poet and author of novels such as "Tess of the D'Urbivilles" wrote a poem called "The Oxen" about the old tradition of animals kneeling at midnight on Christmas Eve. Sums up so much of my own ambivalence towards Christianity that I read it every Christmas Eve at 12 of the clock. Thank you for your post.

An open winter means that roots that lie near the surface can freeze, and the sprouts and grasses that provide extra nourishment in early spring can be quite scarce. In a world where there was no refrigeration, and where people often didn't have enough to eat, that delay could mean a higher death toll during the spring months as weakened bodies succumbed to malnutrition or to disease. So, yes, there is some truth to it; a truth that was slowly vanishing in the last decades of the 19th century.

Ooops, forgot to mention that my comment is in response to "A green Christmas makes for a fat graveyard." Edit mine.

Very excellent information can be found on blog....banque étrangère