Anna and Her Damn Bread: A Legendary Recipe

This past weekend actually felt like winter, by which I mean it was cold and we got some snow. The recent 70 degree weekend was pleasant but a little freakish. Give me a cold snowy weekend instead! I know some of you out there hate snow but it always makes me happy to see it falling. It also makes me want to bake.

I'm still recovering from eating too many cookies and too much candy over Christmas, so I decided to bake some bread rather than a dessert. A wintry New England weekend calls for a classic New England recipe: anadama bread. 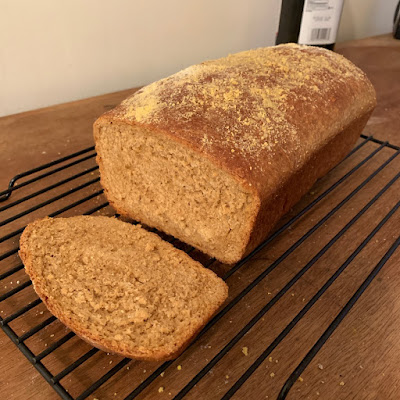 Anadama bread is a yeasted bread made with wheat flour, cornmeal, and molasses. Its consistency and taste is somewhere between cornbread and traditional sandwich bread. You can certainly use it to make sandwiches, but I think it's best just toasted and spread with butter.

The cornmeal and molasses are dead giveaways that anadama bread originated in New England. These two ingredients feature in classic Yankee recipes like Indian pudding and brown bread and have deep roots in New England history. Corn (aka maize or Indian corn) has been part of the local diet for thousands of years. The Pilgrims stopped by Provincetown in 1620 on their way to Cape Cod and stole some corn that the local Wampanoags had stored there. That's how deeply rooted corn is in local history. 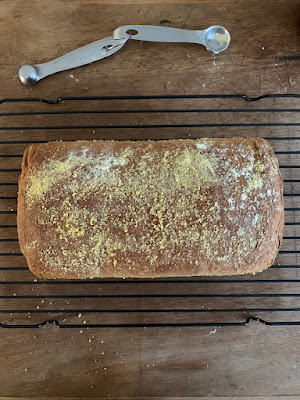 Molasses also has deep roots in New England as part of what's known as the Triangular Trade. In the 1700s distilleries in New England produced rum from molasses, which merchants then traded in Africa for slaves. The slaves were transported to the Caribbean to work on sugar plantations which produced molasses. The molasses was then brought to New England to be distilled into rum which was traded in Africa for more slaves to make more molasses to make more rum... You get the picture and it's pretty grim. I tend to think of molasses as a quaint ingredient used in gingersnaps and molasses cookies but it does have an unhappy history.

Back to the bread. There are two legends that explain anadama bread's unusual name, and they both center on a woman named Anna. In the first, Anna is the wife of a Cape Ann fisherman and she is a lousy cook. A really lousy cook. Every day she serves her husband the same exact thing for breakfast, lunch and dinner: cornmeal mush sweetened with molasses. Finally he can't take it anymore. He screams "Anna damn her!" and combines the cornmeal mush with flour and yeast to make bread. Thus we have anadama bread.

In a second, less prevalent legend Anna is the wife of a sea-captain. This Anna is a great cook and provided baked goods for her husband's long ocean voyages that never spoiled or went bad. Still, the captain always referred to her as "Anna damn her" to his ship's crew, and her bread became known as "Anna damn her's bread." Thus we again have anadama bread. When Anna died the captain put the following on her tombstone: "Anna was a lovely bride, but Anna damn her, up and died." 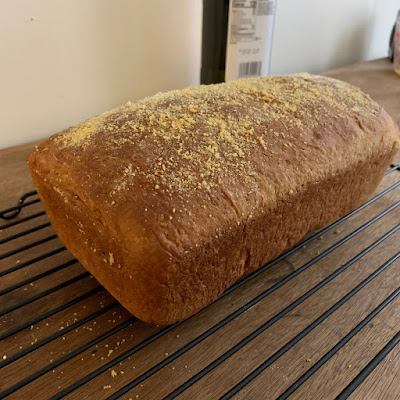 I don't know if either of these stories are true. They're pretty vague (what was Anna's surname and when did she live?) but the bread's unique name has no good historical explanation. None. Some people have suggested the recipe was created by Finnish fishermen or stonecutters living in Gloucester or Rockport, but I couldn't find anadama in the Finnish dictionary. The stories about Anna and her damned bread are the best explanations we have for the name.

Food historian Joyce White, on her blog A Taste of History, notes that "anadama bread" was filed with the U.S. Patent and Trademark Office in 1850 as a brand of bread and was used in 1876 by a company called Anadma Mixes, Inc. The bread is definitely connected to Cape Ann. A man named Baker Knowlton produced the bread in Rockport by the end of the 19th century and shipping it across New England.


If you have a hankering for anadama bread, rich in legend and history, you can probably buy some at the supermarket. When Pigs Fly, the bread company from York, Maine, sells a multi-grain version that is widely available. Anadama bread is not that hard to make, though, and you can find lots of recipes online (like this one from Yankee Magazine). Baking bread is great way to spend a cold, wintry day.

*****
My source for the two legends is Morris Dictionary of Word and Phrase Origins, second edition (1988 ) by William, Mary and William Otis Morris.

In this manner my acquaintance Wesley Virgin's story starts in this SHOCKING and controversial VIDEO.

You see, Wesley was in the army-and soon after leaving-he found hidden, "mind control" tactics that the government and others used to get everything they want.

These are the EXACT same methods many famous people (especially those who "come out of nothing") and top business people used to become rich and successful.

You probably know how you utilize only 10% of your brain.

That's because the majority of your BRAINPOWER is UNTAPPED.

Maybe this thought has even taken place INSIDE your own brain... as it did in my good friend Wesley Virgin's brain around seven years ago, while riding a non-registered, beat-up bucket of a vehicle without a driver's license and $3.20 in his bank account.

"I'm absolutely fed up with living payroll to payroll! When will I become successful?"

You've been a part of those those types of thoughts, ain't it right?

Your success story is waiting to start. You need to start believing in YOURSELF.

CLICK HERE To Find Out How To Become A MILLIONAIRE