The Witch Who Loved Satan in The Shape of A Bear

Most people are familiar with the Salem witch trials, but there were many other witchcraft accusations in early New England history. Some of these stories are quite interesting, like the following.

In the year 1660 William Holmes of Scituate*, Massachusetts learned that a rumor was being spread about his wife. The rumor claimed Goodwife Holmes was a witch, and it was being spread by one of the Holmes's neighbors, Dinah Sylvester.

Goodman Holmes was outraged and took Sylvester to court for slander. It took about a year for the case to come to trial, but finally in May of 1661 Sylvester testified as follows:

Magistrate: "What evidence have you of the fact that William Holmes's wife is a witch?"

Sylvester: "She appeared to me as such."

Magistrate: "In what shape did she appear?"

Sylvester: "In the shape of a bear."

Magistrate: "How far off was the bear?"

Sylvester: "About a stone's throw from the highway."

Magistrate: "What manner of tail had the bear?"

Sylvester: "I cannot tell as his head was towards me."

Sylvester went on to tell the court that Goodwife Holmes was not the only one near the highway in the shape of a bear. The Devil was there as well, and he too was in ursine form. And the Evil One was feeling frisky; he and Goodwife Holmes were making love as only two bears can. 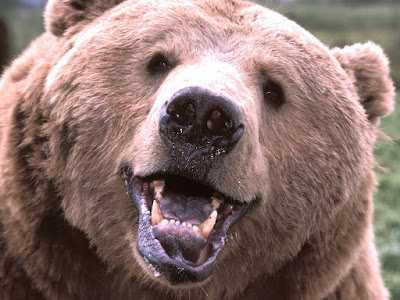 Apparently Sylvester gave explicit details of the lovemaking she saw by the side of the road, but they were blacked out of the final records. The court didn't seem to find her story convincing, and not just because it was so outrageous. Laws at the time specified at least two people needed to bear witness against a witch, and no one else came forward to support Sylvester's testimony.

The court did find Sylvester guilty of slander, though, and sentenced her to either pay Goodman Holmes five pounds (a huge amount of money at the time) or be publicly whipped. They also offered a third option: she could publicly acknowledge that she lied about Goodwife Holmes being a witch. She took the the third option.

Aside from the Satanic bear sex, there are some interesting aspects to this story. One is the location. Scituate was at the time part of Plymouth Colony, which included not only the modern city of Plymouth but also Cape Cod and most of Southeastern Massachusetts. Plymouth Colony was founded by the Pilgrims, and they seem to have been a little mellower than the other Puritans who founded Massachusetts Bay Colony and Connecticut. Although there is a lot of witch folklore from Plymouth Colony, there were only two trials involving witches. Sylvester admitted she lied in the trial involving the bear, and in the other case the woman accused of witchcraft was acquitted. Compare that to the many witch trials in Massachusetts Bay and Connecticut, which led to the execution of more than 30 people.

Dinah Sylvester is another interesting part of this story. She appears in several court cases from that time. In 1666 she and her brother were accused of attacking a town constable who was arresting their mother. She was later accused of fornication (having sex while unmarried), and in 1669 is mentioned in a case against Elkanah Johnson, whom Sylvester claimed was the father of her baby.

Sources: Elizabeth Renard The Narrow Land (1934), Frederick Freeman The History of Cape Cod: The Annals of Barnstable County, Including the District of Mashpee, Volume 1 (1858),  and James and Patricia Scott Deetz The Times of Their Lives: Life, Love, and Death in Plymouth Colony (2001).

So...when he wasn’t face palming, did the judge ask the lady accuser how she knew the bear was a witch? Or... “Do you think, perhaps, they were just a couple of bears?” 🙂

This story gives new meaning to the phrase, "bear witness."

Sue, you ask the same question I asked myself!

Unknown commenter, thanks for the pun!

"bear witness" LOL Buddy, your blog is my life now

Thanks for the post, Peter! Great story, but Strange she just saw a bear and 'knew' it was a witch. Did she accruals claim she saw transformations?

She is my 11th Great Grandmother