Gibbet Hill: Ghosts, A Ruined Castle and A Forgotten Execution?

The other day Tony and I took a road trip out to Groton, Massachusetts. Groton is an old town that was founded in 1655. It's really a beautiful place, with lots of old Colonial homes, charming white churches, and large farms. Looming just outside the town center is a big hill called Gibbet Hill.

As we all know from watching horror movies, every small town has to have at least one spooky location, and in Groton that location is Gibbet Hill. The word "gibbet" can mean a few things but none of them are pleasant. It can mean a gallows (for executions) or it can mean a metal cage used to publicly display dead bodies after execution. The "g" in gibbet is soft, so it is pronounced "jibbet."

Gibbet Hill was quite pretty to visit on a sunny spring day, but with a name like that you know there must be some strange phenomena attached to it. According to local legends, ghosts have been seen lurking on the hill. Most of them wear Colonial attire, and some of them are missing limbs. Someone reported just seeing a dismembered foot wearing a green sock. That's it, just a foot. Stories like this are why I only visit haunted places during the day. 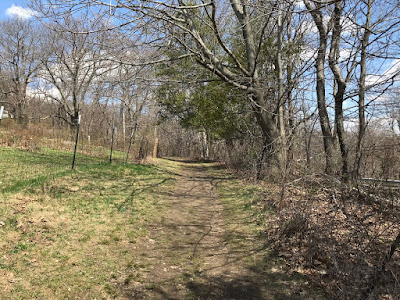 On top of Gibbet Hill are the ruins of a stone castle, which just adds to the spooky vibe. According to one local legend the castle dates from the 19th century. A wealthy man built it for his new wife, but unfortunately she died before it could be completed. He abandoned the project in sorrow and it was never finished. 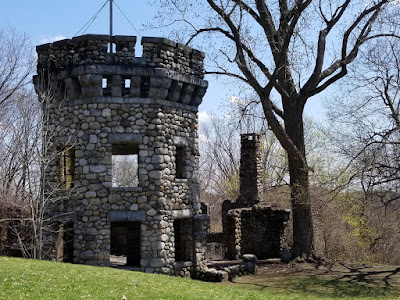 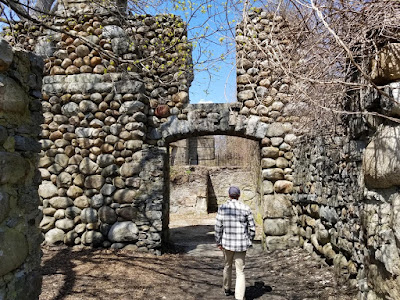 I like that story, but it's not true. Historical records indicate the castle was constructed in 1906 by William Bancroft, a retired general and a politician, as his retirement home. Unfortunately Bancroft ran out of money and couldn't complete it. He sold the castle to a local physician and in time it became a tuberculosis sanitarium. Patients hoped that Groton's fresh air would help cure their ills. 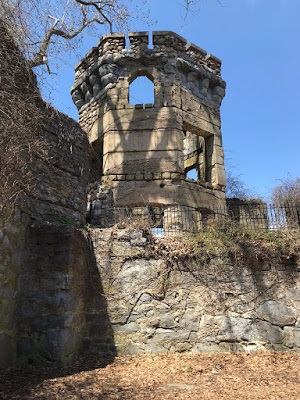 In the 1920s the castle became a private hunting club until it finally burned down in the 1930s in a Fourth of July fireworks mishap. The property was owned for many years after that by the owners of the nearby Gibbet Hill Grill but became town conservation land in 2002. There is a spot on Route 40 where you can park and then hike up a short trail to the castle. 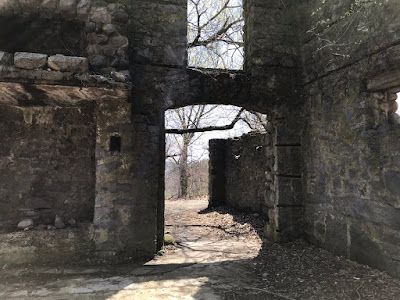 Kate Webber, co-owner of the Gibbet Hill Grill claimed in a 2006 Lowell Sun article that there no ghosts at the castle:


A lot of people are determined that the whole hill is haunted. Before the castle was public property, someone had snuck in and said when they looked through a window, (they) saw a severed foot with a green sock on it. People have reported seeing old colonial couples walking up and down the hills, a man in an old soldier's uniform who walks the property, and a Native American who was rumored to be chased down and killed. I'm convinced there aren't any ghosts roaming. But people look at the stone tower and think there has to be some wonderful and terrible Gothic stories that go with it.

So do ghosts haunt Gibbet Hill? I didn't see any, but I may not be the most psychically sensitive person around. We also visited during the day, and during the day I am always skeptical about all paranormal phenomena. If I had visited at night it would be a completely different matter. I would be convinced each creaking branch was a ghost and I'd be terrified of seeing that severed foot. The castle wasn't too spooky when we went, although there were some really large crows croaking in the trees. 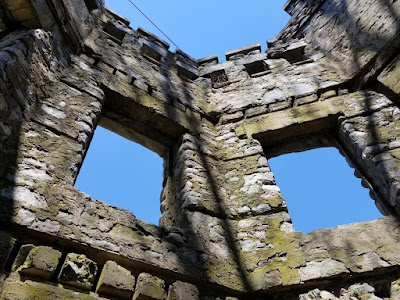 The story behind the hill's name is a little murky. Samuel Green's 1894 book An Historical Sketch of Groton Massachusetts, 1655 - 1890 tells us the following about Gibbet Hill:


It is mentioned in the land-grant of Sergeant Jame Parker, which was entered in the town records of Richard Sawtell, the first town clerk who filled the office from June 1662 to January 1664-65. The tradition is that the hill was so called from the fact that once an Indian was gibbeted on its top. If this ever occurred, it must have happened before Sawtell's term of office.

Various sources on the web, including the Lowell Sun interview with Kate Webber, argue that since there is no proof of an execution the hill was probably named after a hill back in England. I guess that is possible, but we also know that the English settlers were not kind to local Indians, and that Groton was attacked and burned by local tribes during King Philip's War in 1676 and again in 1694 during King William's War. I wouldn't be surprised if there was an unrecorded Indian execution somewhere in the town's past. 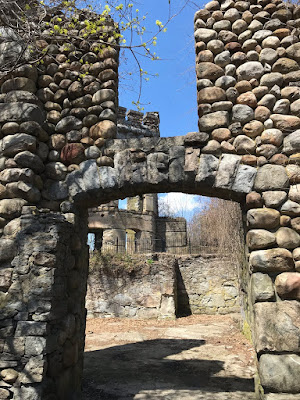 While the ghosts at Gibbet Hill are open to debate, there is at least one well-documented weird story in Groton's history. In the 1600s a young serving girl who worked for the town's minister was possessed by Satan. It's an interesting story and I'll write about it next week.


Very interesting info!Perfect just what I was looking for!

This blog is so interesting and informative. Thanks for sharing with us.

For bookmarks this article

My family and I lived on this farm where my father worked as a farmer for 15 years. I lived there as a young child into adulthood and there's definitely no ghosts there. Trust me my older sister (and my Dad lol) would've loved to scare us with those tales. Actually the ghost stories are something that seemed to start once the property was sold.
And one more thing...parking on Route 40 is NOT recommended. There are 2 other safe areas to park to get to Bancroft Castle

Angelina, where are the other 2 areas to park? We were there today and found parking hard to find. Thank you.