Campus Ghosts at the University of Vermont

One thing I've learned from writing this blog is that you can usually find ghost stories on college campuses. Ivy League schools, state schools, old campuses or new ones - they generally have ghost stories attached to them. Is this because young people are more attuned to the spirit world, or is it just because they more likely to tell each other ghost stories?

UVM's campus sits high up on a hill outside of downtown Burlington and is filled with a mix of beautiful old buildings and newer more modern structures. On the chilly November day I visited it seemed like a great place to encounter a ghost.

One of the most haunted buildings on campus is Converse Hall, a large grey granite dormitory in the center of campus. When I visited Converse Hall was under construction and no students were living there. But perhaps the ghosts were still inside... 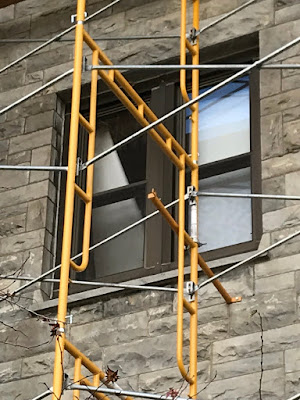 According to various online sources, Converse Hall is haunted by the ghost of a student who hanged himself in the attic in the 1920s. The stress of academia was more than he could endure, but even death has given him no escape since his spirit still lingers in the dorm. Some sources say the ghost's name is Henry. 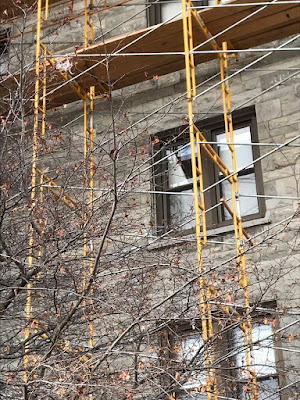 Henry has been accused of causing various spooky phenomena in the dorm, like knocking mirrors off of walls, tearing down posters, slamming doors shut, and rearranging furniture in student's rooms. Despite dying almost 100 years ago it doesn't sound like Henry has matured much in the past century. Those all sound like typical freshman year pranks to me. 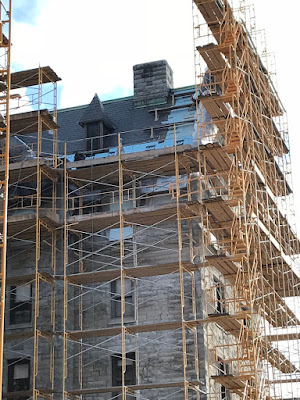 I've also read that the ghost haunting Converse Hall may instead be an engineering student who accidentally electrocuted himself in the 1980s. So which is it, Henry from the 1920s or a more recent ghost? There's no answer, and this type of ambiguity is very common in ghost stories. People encounter strange phenomena and then try to explain them by referring to events that happened in the past. Usually there are multiple explanatory stories. Sometimes not knowing is spookier than knowing.

The identity of the ghost haunting the Center for Counseling and Testing on South Williams Street is known, though. It is the spirit of a nineteenth century sea captain who once lived in the house. The building is called the Jacobs House (after the UVM professor whose widow donated it to the school in 1959), so many people assume the ghost is someone named Captain Jacobs. If the building is haunted it is more likely that the ghost is that of one Captain Nabb, a retired seaman who lived there until his death in 1877. 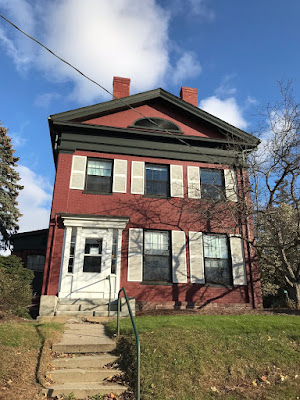 Staff working in the Jacobs House have reported a variety of poltergeist activity, and some claim to have even seen the captain himself. One counselor who worked there reported that one night he saw an elderly man with a large bulbous nose walking down the stairs. As he walked he shimmered "like a jellyfish" before he disappeared. That's kind of freaky. A janitor in building also reported seeing the same elderly man, and that he knocked over a bucket of water and flicked the lights before vanishing. I guess old sea captains can be kind of cranky.

Students and staff aren't the only ones who can partake in the ghostly antics. Even alumni might get a chance to see a restless spirit, since UVM's Alumni Association offices are housed in the beautiful and historic Grasse Mount building. Formally known was the Thaddeus Tuttle house, Grasse Mount dates to 1804 by and was originally named for the wealthy Burlington merchant who built it. Unfortunately Tuttle didn't remain wealthy for long and had to sell off his luxurious home. The house was later re-named to honor a French admiral. 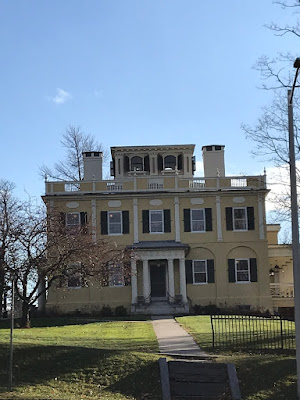 UVM purchased the building in 1895 and used it as a women's dormitory until 1977. The women who lived there apparently loved Grasse Mount and one resident, Pearl Randall Wasson, even composed a song in its honor. Here are some topically appropriate lyrics:


Spirit of Grasse Mount, come to us we pray
Roll back the curtain from the dusty past...

I think the curtain from the dusty past has definitely been rolled back. Strange voices have been heard in empty rooms, and doors have been slammed shut by invisible hands. Is it the ghost of Thaddeus Tuttle, trying to reclaim in death what he lost in life? I haven't read any theories explaining Grasse Mount's supernatural shenanigans. But as I said, sometimes not knowing is spookier than knowing.

All inclusive Accommodation for foreign students in Preston