When I write this blog I always enjoy categorizing the stories I tell. That one's a Bigfoot encounter, that one's a ghost story, that one's a witch story. Humans like to categorize our experiences, and those of us who write about legends and the paranormal are no different. We want to put things into neat little buckets.

However, reality doesn't always fit into neat little categories. We try to impose order, but strange phenomena are much less orderly than we want. They can be downright slippery. Here are a couple stories that illustrate this.


STORY ONE: LITTLE MUMMIES IN THE WOODS

As Joe R. was driving down the wooded road he saw a large object ("as big as a house," he later swore) flying across sky ahead of him. It flew from east to west. It was bright like the sun, white, and somehow blurry. It went down behind the trees between Exit 4 and Exit 5. Several similar smaller objects flew down after it. 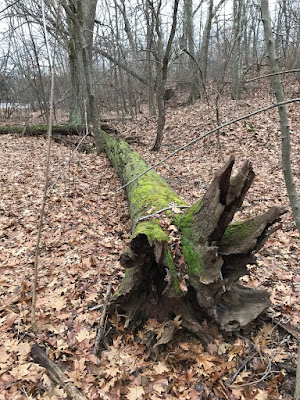 Curious about what he had just seen, Joe R. pulled over and walked into the woods. He didn't find the shiny object, but he saw something even stranger: two small "mummy-like" humanoids walking in the woods. They were about 40 yards away from him. When he saw them Joe R. became scared and ran back to his car.

Joe later told his story to two UFO investigators, and their account was later found by Albert Rosales, the great collector of humanoid encounters. I found the story on a UFO site, and it is truly a UFO sighting in the literal sense of the term "unidentified." What was the bright shiny object? When I read the story my first assumption was that it was some kind of extraterrestrial craft, but that isn't really specified. Joe never saw a spaceship for flying saucer, but simply a glowing white light that flew across the sky and disappeared into the woods. There is no indication of where it came from.

And what of the two little mummy creatures? I suppose if the light were spaceship they might be aliens that came out of it, but again it's not clear if that's what happened. Joe R. saw a light go down behind some trees, then he saw two little creatures walking in the woods. The two phenomena seem connected but it's not clear how. 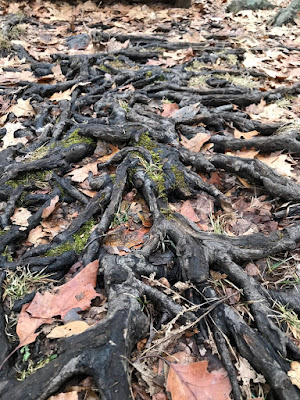 I am particularly hesitant to label this as an alien encounter because of the location. Derry has a long history of strange humanoid creatures. For example, folklore from the 19th and early 20th century claimed the area was the home of a fairy named Tsienneto. Derry was settled by Scotch Irish immigrants and they clearly brought some of their fairy lore with them. Tsienneto was supposed to be a beautiful fairy queen, but in 1956 a man named Alfred Horne saw a small green humanoid while cutting Christmas trees in the woods. The creature had floppy ears like a dog, eyes with a reptilian nictitating membrane, and stumpy toeless legs. Horne tried to capture the creature but fled when it let out an earth-piercing shriek.

The story of Joe R.'s encounter fits into Derry's weird history of weird humanoids. I have no idea what these creatures are (if the stories are true). Are they fairies? Are they aliens? Are they renegade Christmas elves? Are they all different beings that just happened to find their way to Derry? They don't seem to fit into any clear category.


STORY TWO: A DRIVE THROUGH A DARK SWAMP

Here's another case of a strange, unidentifiable humanoid sighting, this time from 1990. Two residents of Bridgewater, Massachusetts were driving down Route 138 en route to a dog track in Raynham. As they drove down the road they saw a strange man standing next to the guardrail:

His clothes were old-looking, dirty and dusty, his skin was pale gray and the detail that stood out most was his hair, very dry looking, thin and brittle, sticking off from the sides of his head in a strange manner.


The two Bridgewater residents went past him to the track, but when they reached their destination they realized it was not open that night. They turned around and drove back the way they came. They  were surprised to see the man was no longer by the guardrail. They had only been gone a few minutes, and Route 138 at that area goes through a very dense swamp. There was no place for the strange man to go, unless he went into the dark, night-time swamp. 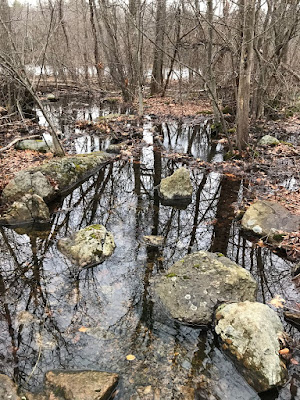 I found that story on the same UFO site where I found Joe R.'s story, so someone thought there was something weird about the man near the swamp, but what? He could have just been a homeless person living in the swamp. But once again the location is important.

Route 138 goes right through the infamous Hockocmock Swamp, which is a hotspot for paranormal encounters and is itself smack in the middle of the even more infamous Bridgewater Triangle. Given the location, this story's inclusion on a UFO site makes a little more sense. UFOs are often seen in the Bridgewater Triangle, although there wasn't one in connection with this story. The human mind wants to make connections. There must be something strange about a strange man in strange location. Maybe he was a ghost? A swamp spirit of some kind? A fairy there to lure people away from the road and into the darkness?

I don't think we'll ever know the answers to these questions. We have an urge to give order to our world, but sometimes the world has other, weirder plans.