The Devil Revealed by His Foot: A Witch Trial and A Folk Story

Here's a story that sounds like a fairy tale. Once upon a time there was a young woman living in London, England. Like most young women of that time (the 17th century) she was eager to marry and move out of her parents' home.

One day while she was walking down the street a young man began talking with her. She didn't know him, but she liked him almost immediately. He was handsome. He was well-dressed. He was a smooth-talker. He flattered her. The young woman found herself falling just a little bit in love with him.

"It's been lovely talking with you," he finally said. "I need to be on my way, but perhaps I can meet you here again tomorrow?"

The young woman agreed. How could she refuse such a handsome young man? But as she walked away she glanced down at his feet. She gasped softly. One foot was normal, but one foot was a cloven hoof. She had been flirting the Devil.

She had no intention of marrying the Devil. The next day she did not go the appointed meeting place, but instead hid nearby. She watched as the Devil arrived, and watched as he grew more and more impatient as he waited. When the Devil realized she was not going to show up he grew enraged. The young woman watched in horror as he angrily ripped down a heavy iron gate and stalked off with it in his hands.


That really sounds like a fairy tale, doesn't it? Surprisingly, it isn't. A Connecticut woman, Goodwife Ayres, told this story to two neighbors in the 1660s. It had really happened, she said, and she even claimed she was the young woman in the story. Her neighbors remembered the story and later told it to a Hartford judge when Goody Ayres was accused of witchcraft in 1662.

Like so many accused witches, Goody Ayres was an unpopular person in Hartford. Her husband William was a well-known thief and had been convicted of stealing pigs, cows, horses and even iron bars and his bad reputation rubbed off on her. When a young woman named Elizabeth Kelly grew ill she accused Goody Ayres of bewitching her, and after Kelly died her parents charged Ayres with witchcraft.

I think it's obvious to a modern reader that Goody Ayres's story is just a folktale. The revealed foot is an old motif that shows up in lots of stories. For example, a Biblical legend claims that King Solomon was suspicious of the Queen of Sheba when she arrived in Jerusalem. He had heard that she had one human foot and one goose foot, but her long skirts hid her feet. Thinking of a way to trick her, the wise king led her over a stream while touring the kingdom, and as she lifted her skirts he caught a glimpse of a webbed bird foot. 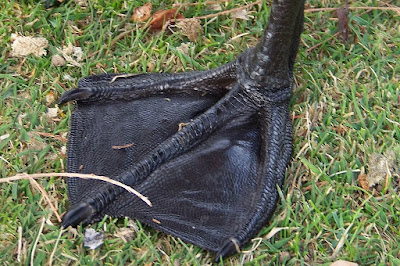 The Queen of Sheba is not the only queen with a strange foot - a very similar story is told about Emperor Charlemagne's mother, Queen Bertha. The German folk-goddess Perchta is said to have one goose foot, and many European fairies are also believed to have animal feet. For example, the erdluitle, small humanoid fairies found in Switzerland, wear long robes and skirts to hid their goose like feet, which are either hooved or goose feet. The fees of France look like beautiful humans, but each has one flaw, like a bird or animal foot. The Manx sleigh beggy look human but leave crow's foot prints in the dirt when they walk.

I think you get the picture. Goody Ayres's story about the Devil was just the latest iteration of a recurring story, but she gave herself the starring role. Not much is known about Ayres (including her first name), and I wonder why she told this tale about meeting the Devil. Did she think it was entertaining? Did she do it to impress her neighbors? Did it make her human husband look better in her mind? "Hey, he might be a thief but it could be worse. I almost dated Satan!"

Sadly, we'll never know. The Hartford judges found Goody Ayres guilty of witchcraft. I don't think the story about the Devil's foot was the conclusive piece of evidence, but it certainly didn't help her case.

Goodness, how sad! You tell a gullible neighbour a folktale and it’s used against you! She probably heard it from her mother or grandmother.

It is sad, isn't it? I'm surprised people believed such an obvious fairy tale.

When I read the stories I wondered if each case could be explained by the viewers having witnessed common minor deformities such as clubbed or webbed feet. In the wrong setting or expectation the shock could leave someone in those eras with a very different memory of what they saw than a doctor or person familiar with the man or woman’s conditions might have had.