Have you ever seen the movie Trog (1970)? It's a British horror film and was the last movie that Joan Crawford made before she died. It's not a good movie by any stretch of the imagination, but it is one of my favorites. 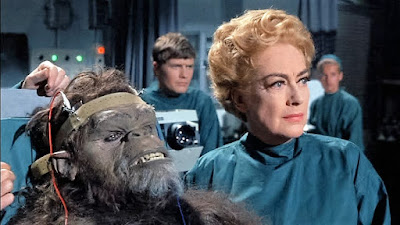 The basic premise is this: some handsome young spelunkers are exploring a cave when they encounter something terrifying. The surviving spelunker is driven insane by what he saw, but anthropologist Dr. Brockton (Joan Crawford) believes he has seen a prehistoric hominid. She manages to capture the creature, names him Trog, and tries to teach him to be human. Of course it doesn't go well and by the end of the movie Trog is ripping off people's arms, setting fires, and terrorizing small children. 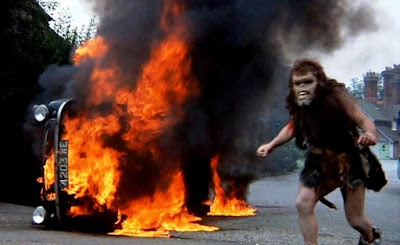 There are many things to like about Trog: Joan Crawford, stop-motion animated dinosaurs, bad dialogue, and a gory ending. But I really like the idea that lurking underneath our mundane landscape are ancient, prehistoric beings frozen in time waiting to emerge and amaze us. It's been the premise of a lot of horror movies, but none are quite as good as Trog. 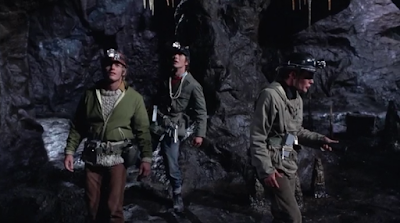 I don't think anyone now really believes that there are prehistoric monsters sleeping in suspended animation below our feet, but in 1865 some miners in Vermont discovered something deep under the Green Mountain State. It was not Trog, but was instead a frog. The New York Herald ran the following article on October 20, 1922:


Unearthed 114 Feet Underground by Workmen In a Mine Shaft
To The New York Herald : In the summer of 1865 workmen while digging in a new shaft at an ochre mine at Forestdale, Vt., unearthed a huge bullfrog at a vertical depth of 114 feet underground. The frog lay dormant in a sort of pocket or miry hole, and aside from the fact of its being found at so great a depth its large size and its excellent state of preservation attracted attention.


The frog was 14 inches long from the tip of its head to the end of its spine, which is really big, but otherwise resembled an ordinary bullfrog. At first the miners just thought it was dead, but it soon began to twitch and eventually revivified. After showing it to several townspeople the miners brought it to a pond, where it lived and croaked loudly for many years.

The reporter goes on to speculate that the giant frog had been hibernating for thousands of years, and had been frozen underground during an ice age. (This is almost exactly the same plot as Trog!) The frog story was told to the Herald reporter by one Frank Rogers of Brandon, Vermont, who claims to have seen the frog emerge from the mine when he was 15 years old. 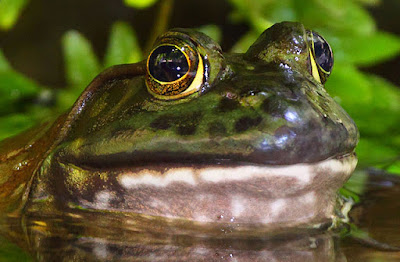 Sadly, I think this story is probably a hoax, and it was not the only story of its kind. Joseph Citro cites several similar ones, some dating back to the 1700s, in his book Weird New England. This 1922 story may just have been the latest version of a long folklore tradition. Giant frogs also figure in some Native American myths from New England, like this one about how the hero Glooskap defeats a giant frog, so the local obsession with monstrous frogs could be something that predates English settlement.

I recently read Alan Moore's Lovecraftian comic series Providence. One character proposes the following interesting idea: the subterranean, the past, and our subconscious are all the same thing. According to this character, when we dig underground we are digging into our past, and also digging into our subconscious dreamworld. So perhaps those Vermont miners found something subconscious that wanted to see the light of day. Hopefully it was happy croaking in that pond.

Really, as long as you don't expect to find something prehistoric alive, you don't need folklore to find genuine strange - and huge! - critters that really existed. Our Australian megafauna were probably wiped out by humans, but we know they existed and how big they were from fossils and skeletons. There were giant wombats and kangaroos that would have towered over us. My favourite is one the scientists jokingly call "the demon duck of doom." It was a huge bird that definitely didn't eat seeds and worms and you really wouldn't want to meet it in a dark alley. Yet it was related to - well, ducks!

The Laws Of Magic - Steampunk Rules!