There has been a surprising amount of strange New England folklore in the news this week. Summer is usually a slow time for news, but I guess that doesn't hold true if it's really weird and unusual.

First up, someone in Merrimack, New Hampshire took a photo of an unidentified thing in the sky on June 26. What is it? An alien craft? A giant space jellyfish?

The photographer sent the photo to NH1 News and several other websites. A NH1 meteorologist thought it might be the sun refracting off some clouds, while the people at UFO Sightings Hotspot thought it was probably just a lens flare.

The photographer didn't actually see the object/flare with their naked eye, only through their camera. They wrote the following on UFOStalker.com:

I took my kids to the park, clouds came in and it got dark, the sun was shining threw the clouds on the right so I started taking photos as it was beautiful as I was looking at the pictures I captured I noticed it away from the sun under the clouds not with my eyes with my photo.  so here it is no idea what it is but it's interesting

New Hampshire has a long and venerable history with UFO sightings. And as many people know, one of the most famous UFO abductions allegedly occurred in the Granite State when Betty and Barney Hill had an unusual encounter on a lonely road in 1961. Were they really abducted by aliens, or is there another explanation? Their niece Kathleen Marden recently spoke at a UFO convention in Roswell, New Mexico. You can read her thoughts on the case here.

Meanwhile, people up in Kennebunk, Maine were disturbed by strange activity of another kind. Not alien abductions, but rather someone defacing property with spray-painted images of Sasquatch. CBS News reports that Kennebunk police arrested a 36-year old man they say is responsible and charged him with criminal mischief and possession of drugs. There's no word on what motivated him to paint images of Sasquatch around town. 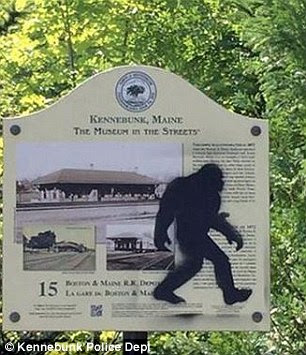 The Boston Globe recently ran an article about Cape Cod's Monomoy Island. Currently uninhabited, Monomoy once was home to a small village of fishermen and their families. The Globe notes that the islanders also had the reputation for being shipwreckers:

On stormy nights, Monomoyers would walk a limping old horse down the beach with two lanterns hanging from a pole mounted on his saddle. Mariners trying to get around the Cape would mistake the lanterns for the lighthouse, turn too soon, and wreck on the bars. The most sinister version of this story has the villagers murdering the ship’s crew. Wrecking continued until as recently as 1909, with the wreck of the Horatio Hall. Today, many homes in Chatham have china and silverware from the Hall and other wrecks.

Someone in the comments posted a link to an article in Cape Cod Life that downplays the shipwrecking and argues instead that most of the Monomoyers actually tried to save people from shipwrecks. That same article also notes that the island was haunted by a ghost called Old Yo-Ho who stalked Monomoy's shore at night, carrying a lantern and endlessly calling out his own name.

Do you want to hear me talk about witchcraft? If you said yes, this is your lucky day. WAMC, an NPR affiliate from New York, interviewed me for their podcast "Listen With The Lights On." I talk about an early witchcraft trial from Springfield, Massachusetts, a young lady who was tormented by a spectral witch in the 1840s, and some teenage boys who encountered something witchy in the Freetown State Forest.

That's it for this week. Who knows what weird stories will show up next? I'm hoping they're as good as these were!

The problem is, these days, we can no longer say that "the camera doesn't lie". It sounds as if even the UFO bunch didn't think it was anything special.

You have some amazing stories in New England! And yes, I will be checking out that podcast, later today. Thanks for sharing!

Thanks Sue! I think you're right about the camera not lying...