Spend Your Summer Vacation With Sasquatch and H.P. Lovecraft

Do elementary school students still need to write essays about what they did on their summer vacation? I seem to remember this was a common practice when I was a child, but honestly I'm not sure if it's a real memory or just something that I saw on TV a lot.

Either way, I usually spent my summer vacations swimming in a nearby pond, playing Dungeons and Dragons, riding my bike, and doing children's theater. These activities were supplemented by long periods of reading musty paperbacks, mostly science fiction, fantasy and horror, but also paranormal and occult books too. Erich Von Daniken, Charles Fort, John Keel, Charles Berlitz - I was an indiscriminate reader of weird stuff. These authors confirmed my suspicions that the Bermuda Triangle was a gateway to Atlantis guarded by UFOs flown by Sasquatches from the hollow Earth.

Of course I'm kidding about those UFOs (well, mostly), but I suspect a lot of my readers had similarly strange summers. Unfortunately that sense of untrammeled possibility tends to shrink as you get older, as does the amount of vacation time you get. It's hard to focus on Sasquatch when you've got bills to pay and a family to care for.

If you want to immerse yourself in high weirdness this summer but have limited time, you might want to try one of these short but intense experiences: NecronomiCon Providence, and the International Cryptozoology Conference 2017. Spend a weekend experiencing strange New England at its best! It's almost as good as spending the whole summer reading musty old paperbacks.


NecronomiCon Providence takes place August 17 - 20 at Providence's Biltmore and Omni hotels. This multi-day convention celebrates the life and work of H.P. Lovecraft, Rhode Island's master of horror and weird fiction. Lovecraft included a lot of authentic local lore into his stories so folklore buffs should find plenty to enjoy. NecronomiCon is a mix of popular culture programming and academic lectures so really there's something for everyone.

For example, if you're in an intellectual mood you can attend a lecture on non-Euclidean geometry (one of Lovecraft's favorite tropes) or one titled "The Madness of Minds: Consciousness and Materialism in Lovecraft’s Fiction." Heady stuff! Other sessions feature panelists discussing Lovecraft's well-documented and unfortunate racism. If you're in a pop culture mood, you can watch a Lovecraftian film, play a role-playing game, or take a virtual walking tour of Providence. And you won't want to miss the tongue-in-cheek Cthulhu Prayer Breakfast. It's a weekend of fun and unspeakable chaos for the whole family! I've attended NecronomiCon in the past, and when I left my mind was overflowing with strange and uncanny knowledge. 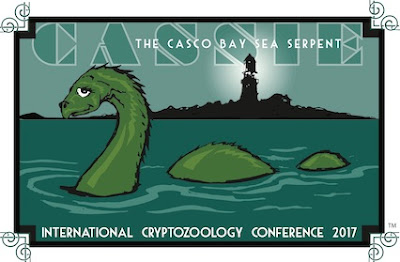 If you'd rather head up north, you can attend the International Cryptozoology Conference 2017, which will be held on Labor Day weekend at the Clarion Hotel on September 3. This looks like it will be a fantastic conference. It features well-known speakers like Linda Godfrey, who investigates werewolf and dogman sightings, Loren Coleman (one of the leading figures in American cryptozoology) and Joseph Citro, one of my favorite New England folklore writers. I am sure that spooky stories will abound.

A new documentary about the Mothman of Pleasant Point will also be shown at the conference. I love the Mothman stories, so I was excited to hear about this. Attendees will also have the opportunity to learn about sea serpents, Sasquatch, and even hear from an expert on how to carve Bigfoot sculptures with a chainsaw. Again, fun for the whole family, but you may want to keep the chainsaw away from the kids.

When you go back to school (or work) you'll definitely have something to talk about. If other people say things like "I went fishing and camped in the White Mountains this summer," you can smile the confident and knowing smile of one who has experienced strange things before you share your bizarre summer adventures.

It sounds like great fun! Alas, I'm in the wrong country for that, but I really must time my first visit to the U.S. to coincide with these events.